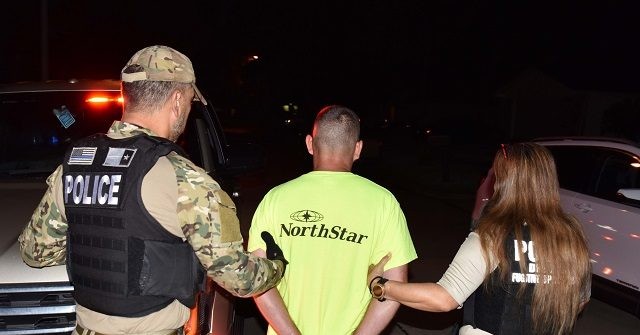 U.S. Immigration and Customs Enforcement (ICE) Enforcement and Removal Operations (ERO) officers arrested a Mexican national who is wanted in California in connection to a 19-year-old homicide investigation, according to information provided to Breitbart Texas by ICE officials in Houston. Border Patrol agents arrested the Mexican man three times in less than one week in December 2006. Agents removed him to Mexico after each arrest.

His fourth attempt to re-enter the U.S. appears to have succeeded and the Mexican migrant has been in the U.S. since that time, ICE officials reported.

Detectives from the Anaheim, California, Police Department (APD) contacted Houston ERO officers earlier this year after they learned from the Orange County, California, District Attorney’s Office (OCDA) about the possibility that a homicide suspect, Leopoldo Serrano Vargas — aka Leonel Serrano Vargas and Ricardo Hernandez — was living in the Houston area.

Further investigation from APD and ICE ERO Houston led to the discovery of the suspect residing in northeast Houston. ERO officers arrested Serrano Vargas on September 11 after determining he was living in Houston under an assumed name.

The OCDA’s Science and Technology Unit positively identified the man as the homicide fugitive being sought.

“For almost two decades this criminal alien fugitive has gone to tremendous lengths to avoid detection by law enforcement authorities for his alleged crimes in California,” Patrick Contreras, field office director for ICE Houston, said in a written statement. “Our ICE Fugitive Operations team tracked down and arrested Serrano Vargas, removing a potentially dangerous criminal alien from our community and ensuring that he will face prosecution for his alleged crimes.”

The suspect apparently fled to Mexico following the alleged 2000 homicide in Southern California. Despite his fugitive status, Serrano Vargas illegally re-entered the country on December 12, 14, and 18, ICE officials reported. Each time, Border Patrol agents apprehended him and returned him to Mexico.

Serrano Vargas is being held in Texas pending extradition to California where he will face homicide charges. ICE will cooperate with California to return their fugitive despite the state’s sanctuary policies. “ICE will seek to take custody of Serrano Vargas for his immigration violations following disposition of his criminal proceedings,” officials stated.

Serrano Vargas also faces federal felony charges for illegally re-entering the U.S. after being deported three times. If convicted, the Mexican fugitive could face up to 20 years in federal prison.