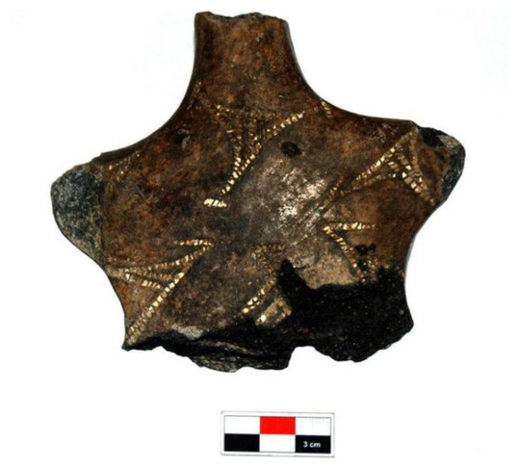 © Varna Museum of Archaeology via Radio Varna
The newly discovered prehistoric figurine is deemed a very valuable find because of the perplexingly small number of such figurines from the Middle Chalcolithic along Bulgaria’s Black Sea coast.

A partially preserved 6,600-year-old anthropomorphic clay figurine from the Chalcolithic (Aeneolithic, Copper Age) has been discovered by archaeologists in a prehistoric pottery workshop located close to the town of Suvorovo, Varna District, in Northeast Bulgaria, near the Black Sea coast.

More specifically, the prehistoric pregnant woman figurine dates back to 4,700 BC – 4,600 BC, the brief period Middle Chalcolithic.

As of the middle of the 5th millennium BC, it was followed by the Late Chalcolithic famous for the Varna Culture, which boasted the world’s oldest gold treasure, the Varna Gold Treasure from the Varna Chalcolithic Necropolis.

It was part of Europe’s first human civilization found in what is today’s Bulgaria and other parts of the Balkan Peninsula near the Lower Danube and the Black Sea dubbed by some American scholars “Old Europe”.

The figurine is half-preserved, and consists mostly of its torso. It is about 15 centimeters tall, meaning that the figurine was originally about 30 centimeter tall.

The site of the figurine’s belly had another clay part, which was attached or glued to it, and which broke off and has not been found. However, there is sufficient evidence for the researchers to conclude that it was used in order to augment its belly, thus seemingly depicting a pregnant woman.

Slavchev reveals that the archaeological team has discovered parts from two anthropomorphic figurines in the Chalcolithic site in Suvorovo during their 2019 summer season excavations there. 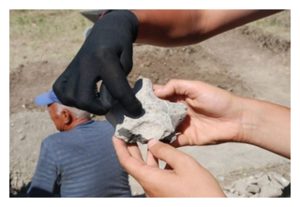 © Radio Varna
An attachment to the figurine which depicted a pregnant belly is believed to have broken off back in prehistoric times.

One of them, however, is said to be typical or “standard” for the prehistoric figurines from the said period, while the one depicting a pregnant woman is the truly intriguing one.

“The second figurine is a very nice, important, valuable artifact of a pretty large size. It actually is a preserved part from the torso of a woman. The top part of the head and the legs have been broken off. At the site of the belly, there was an additional attachment which broke off in ancient times, and which apparently shows a larger size – it was most probably connected with depicting a pregnancy,” the archaeologist explains.

“It is very richly decorated with stamped lines on the front and on the back. Various geometrical motifs were encrusted, which most probably convey the decoration of the clothing… The details from the back and the chest are very harmonically combined,” he adds.

“A similar figurine has been found near the Black Sea town of Balchik, and is presently kept at the Balchik Museum of History. Ours is not as well preserved as that one but it is far more richly decorated,” Slavchev elaborates.

He further points out the “strange phenomenon” that very few anthropomorphic figurines from the Middle Chalcolithic period (4,700 – 4,600 BC) have been found along Bulgaria’s Black Sea coast – while such finds from both the Early Chalcolithic and the Late Chalcolithic are far more numerous.

“Very few humanlike figurines have been found on [Bulgaria’s] Black Sea coast from the Middle Chalcolithic. This is a weird phenomenon given that anthropomorphic art was part of the everyday life of ancient people. It began to appear en masse from the start of the Early Neolithic and was widespread up until the end of the Late Chalcolithic. It was most probably connected with cult, ritual, religious beliefs. It is presumed that these depictions convey priestesses of certain deities, or the Mother Goddess herself – who was the supreme deity in the pantheon of the prehistoric people,” Salvchev explains.

He points out the importance of the Middle Chalcolithic period in the development of the prehistoric civilization in today’s Bulgaria.

He hopes that another part of the Middle Chalcolithic pregnant woman figurine could be found at the archaeological site near Bulgaria’s Suvorovo, although the chances for that really slim.

“Even with this appearance, the figurine is representative enough so as to become part of our exhibitions,” the archaeologist notes.

The 2019 excavations of the Chalcolithic site located in an area called “Koriyata” near Suvorovo have continued the research of a prehistoric pottery workshop.

The archaeological team has discovered a 25-centimeter deep trough that was apparently used by the prehistoric craftspeople for preparing the clay for their works, both works of art and household items. Pottery tools and material prepared for processing have also been found.

For the third year in a row, the digs in Suvorovo have been funded by Bulgaria’s Ministry of Culture, although the rooms where the prehistoric pregnant female figurine has now been discovered were first excavated back in 2011. 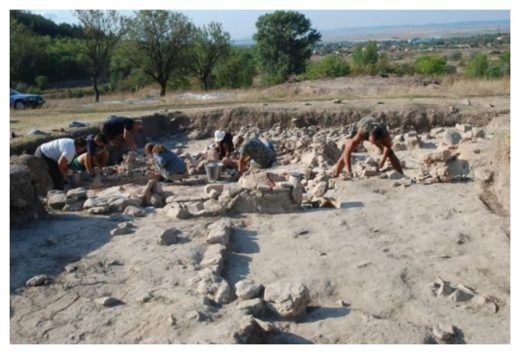 The walls of the two rooms researched in 2019 have survived up to a height of 40 – 45 centimeters. Inside, over the past few years, the archaeologists have exposed several grounds made of stamped and baked clay.

The archaeologists have now found that the prehistoric artisans had erected a platform that was built up several times, and which was 1.5 meters long, 1.2 meters wide, and about 35-40 centimeters tall. Each time new clay plaster was added on top of it, it was baked so that the clay flooring reached the firmness of “concrete”.

“This entire space was constantly cleared up and re-used for purposes that involved the use of fire,” the archaeologists says.

“After, with lots of effort, we managed to remove this entire series of plasters, we were hoping to reach the original ground but it turned out that right underneath there is a niche, or a cellar, or a basement, which is approximately 1.5 meters long and 1.2 meters wide, and this vault, so to say, is filled with ceramic vessels. We didn’t have enough time to work further so we conserved the site for the winter. Next year we are going to in-depth, to see what’s in this basement, how many vessels are there in it, and what other beauties can also be found. At the present stage, we can safely say that there are at least 10 fully preserved vessels inside,” Slavchev explains.

He also reveals that the clay-making trough the archaeologists have found in the site in Suvorovo was in fact upright when a wall collapsed on it and partly destroyed it. However, when it fell, it covered several prehistoric ceramic vessels.

“Next year we are going to deal with its lifting up, and I hope we will be able to conserve what’s been preserved from it in order to showcase it in our exhibition. This building was a ceramic workshop, we are constantly getting new information confirming that… We’ve also found several clay balls that had been prepared for the making of pottery vessels, which hardened like bricks as a result of a fire. Once again, we found more pottery-making tools used for shaping and decoration, including bone awls, and bone and stone polishers for polishing and varnishing the artifacts,” the archaeologist reveals.

“This period [the Middle Chalcolithic] is very interesting, very attractive with respect to the artistic skills, and even today people get impressed seeing the beautiful shapes, ornaments, and proportions of those vessels – in many ways this pottery is more attract than today’s,” Slavchev concludes, emphasizing that the prehistoric finds from Bulgaria’s Suvorovo already warrant a special exhibition.

Also check out these other stories about preshitoric female figurines found recently in Bulgaria:

5,000 BC ‘Great Goddess with Hair in a Bun’ Found in Huge Shrine in South Bulgaria Unveiled for the First Time