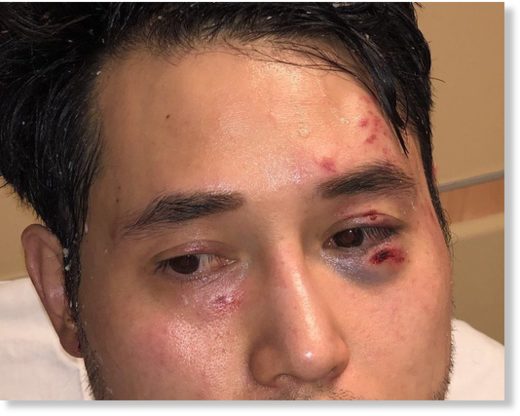 © Twitter/Andy Ngo
Journalist Andy Ngo after being attacked by Antifa

All revolutionary movements seek to sanctify their lawless behaviour as a spontaneous eruption of righteous fury. In some cases, such as the Euromaidan movement in Ukraine, this conceit is justified. But usually their violence is a pre-meditated tactic to intimidate adversaries. Or as Bolshevik theorist Nikolai Bukharin put it, “In revolution, he will be victorious who cracks the other’s skull.”

The Antifa thugs who attacked Quillette editor and photojournalist Andy Ngo in Portland yesterday did not quite manage to crack his skull. But they did manage to induce a brain hemorrhage that required Ngo’s overnight hospitalization. (For those seeking to support Ngo financially as he recovers, there is a third-party fundraising campaign.) The scene was captured by local reporter Jim Ryan, whose video can be accessed at the link below. We caution readers that it is an unsettling spectacle-by which we mean not only the violence itself, but the unconstrained glee this pack of mostly young men exhibit as they brutalize a journalist whom they’d spent months demonizing on social media, and whom they’d explicitly singled out for attack.

Andy Ngo is an elfin, soft-spoken man. He also happens to be the gay son of Vietnamese immigrants-salient details, given Antifa’s absurd slogans about smashing the heteronormative white supremacist patriarchy. Like schoolboy characters out of Lord of the Flies, these cosplay revolutionaries stomp around, imagining themselves to be heroes stalking the great beast of fascism. But when the beast proves elusive, they gladly settle for beating up journalists, harassing the elderly or engaging in random physical destruction.

Antifa’s first prominent appearance was in 2017, when black-clad protestors at Berkeley used violence to shut down an appearance by provocateur Milo Yiannopoulos. This set a pattern whereby their rallies have been presented as counter-demonstrations aimed at “taking back the streets” from right-wing groups. But more and more, this conceit has dissolved into farce-as in Washington last year, when Antifa gangs showed up to protest largely non-existent conservative protesters. “Again and again, small groups of Antifa members harassed, threatened and occasionally jostled reporters,” the Washington Post reported. “The activists demanded not to be photographed as they marched down public streets-even as many of them hoisted their own phone cameras and staged their own photo ops.”

This vignette is telling, because it points to the base motivations of many Antifa members-which seem to consist of glorifying themselves as freedom fighters on social media, and shutting down anyone who challenges their vainglorious narrative. Which brings us back to the reason Antifa activists were so eager to beat up our colleague Andy Ngo, a Portland resident who has been relentless in exposing the true face of Antifa. They attacked him for the simple reason that he has challenged their ideological propaganda-an Antifa tactic that any true fascist would recognize and applaud.

Given the widespread support for Ngo that has manifested itself over the last 24 hours-and the corresponding disgust with his attackers-we hope that these events will herald new policies to protect the public (including journalists) from those who claim the right to use violence as a form of political expression. Following the hate-killing of Heather Heyer by James A. Fields Jr. in Charlottesville, Virginia two years ago, attention was drawn to the problem of right-wing political violence. And rightly so. But this attitude of vigilance must be broadened to include all radical groups. It shouldn’t require an actual fatality to goad Portland’s mayor and police into real action. Surely, a brain hemorrhage should be enough.

We also are hoping that our fellow journalists might awaken from the delusion that Antifa is a well-intentioned band of anti-fascists with a few bad apples sullying the cause. As Quillettereported last month, a simple statistical study serves to show that the journalists who cover Antifa most often and most energetically have turned their outlets into pro-Antifa propaganda organs. Indeed, this bias is so entrenched that some left-wing media responded to our report not with introspection, but with paranoid and maudlin claims that Quillette and its authors must be secretly in league with Antifa’s fascist enemies. One might hope that the brutality inflicted on one of Quillette‘s editors will help disabuse them of such conspiracy theories.

But it’s hard to be sure. Anna Slatz of The Post Millennial has assembled a list of prominent liberal journalists who have responded to the vicious assault on Ngo with either snarky dissembling or outright celebration. And a journalist at Vox, Carlos Maza, has even cheered on the practice of assaulting people with milkshakes, such as the kind used to douse Ngo. These are the same people who would (rightly) respond with howls of outrage if a journalist were assaulted by right-wing protestors. And it is appalling that anyone in our industry would excuse violence against a journalist on the basis of political orientation.

We wish our colleague Andy Ngo a speedy recovery. For more details about the attack he endured, interested readers can follow him on Twitter at @MrAndyNgo. Although we lament his ordeal, we salute his journalistic courage in exposing a movement that seeks to crack skulls under cover of fighting fascism.