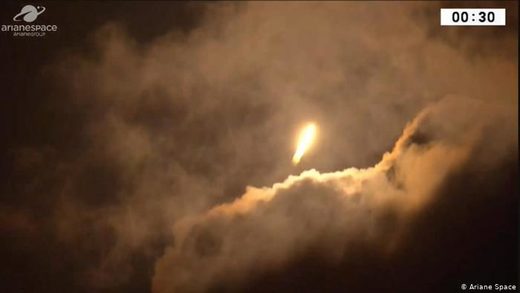 The rocket suffered an “anomaly” two minutes after takeoff, causing its trajectory to degrade. The satellite was capable of capturing high definition images that could be used for mapping and gathering agricultural information as well as urban surveillance and monitoring of borders and coastlines.

“A major anomaly occurred, resulting in the loss of the mission,” Luce Fabreguettes, executive VP of missions, operations and purchasing, said. “On behalf of Arianespace, I wish to express my deepest apologies to our customers for the loss of their payload and telling them how sorry I am.”

The Vega launched from Guiana Space Center in Kourou, French Guiana at 1:53 GMT Thursday and left its intended course immediately before losing telemetry data two minutes into the launch, during its second-stage ignition phase.

“More precise information” from the first flight data analysis would be communicated to everyone as soon as possible, Fabreguettes promised during the livestreamed launch.

The Emirati satellite, Falcon Eye 1, was a dual-purpose Airbus-built model designed to supply imagery for the UAE Armed Forces and the commercial market while orbiting Earth 15 times per day. While the country had scheduled a second satellite – Falcon Eye 2 – for later in the year, that timeline is now uncertain.

The VV15 mission, delayed twice due to unfavorable weather conditions, was Vega’s 15th since 2012 and its first failure. The Vega is designed to lift 1,500kg to low-Earth orbit.