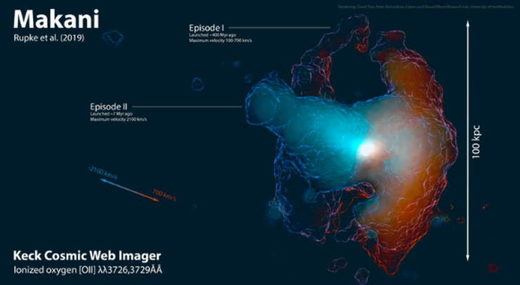 © Jim Geach, David Tree & Peter Richardson, University of Hertfordshire
A volume rendering of the ionized gas wind in the Makani galaxy. Two of the dimensions are spatial, and the third is velocity. The colors trace the velocity axis, shown by the arrow at center. The approximate locations of the two proposed outflow episodes are labeled.

For the first time, astronomers have directly observed the massive outflow of gas extending hundreds of thousands of light-years from a galaxy.

It is, they say, the first direct evidence of how galactic winds feed the circumgalactic medium – the vast clouds of gas that wrap around galaxies as they float in intergalactic space. But more than that, the wind also reveals some of the wild dynamics of massive galactic collisions.

That’s because the galaxy – called SDSS J211824.06+001729.4 and nicknamed Makani by the researchers after the Hawaiian word for ‘wind’ – is no ordinary object. It’s actually a sort of galactic Frankenstein’s monster, two galaxies that have collided and merged to form one compact, but massive galaxy.

Space may be mostly… well, space, but there are a lot of galaxies floating through it. Every now and again, two of these galaxies will be gravitationally drawn together. There won’t actually be much stuff bumping into other stuff; instead, they merge.

We’ve seen this in a few different stages of the smoosh process. Makani is what we can see after the smooshing has already taken place, called a late-stage major merger. And this tells us something about why it may be belching out gas.

“Galaxy mergers often lead to starburst events, when a substantial amount of gas present in the merging galaxies is compressed, resulting in a burst of new star births,” explained astrophysicist Alison Coil of UC San Diego.

“Those new stars, in the case of Makani, likely caused the huge outflows – either in stellar winds or at the end of their lives when they exploded as supernovae.”

And belching out gas Makani most certainly is. Using the Keck Cosmic Web Imager, the team mapped out a region of hot ionised oxygen that spans 4,900 square kiloparsecs, or roughly 52 billion square light-years.

There are two separate outflows depositing metal-enriched gas in an hourglass-shaped bipolar bubble at up to 10,000 Kelvin. These outflows seem to have occurred at different times.

“The earlier outflow has flowed to large distances from the galaxy, while the fast, recent outflow has not had time to do so,” said physicist David Rupke of Rhodes College. 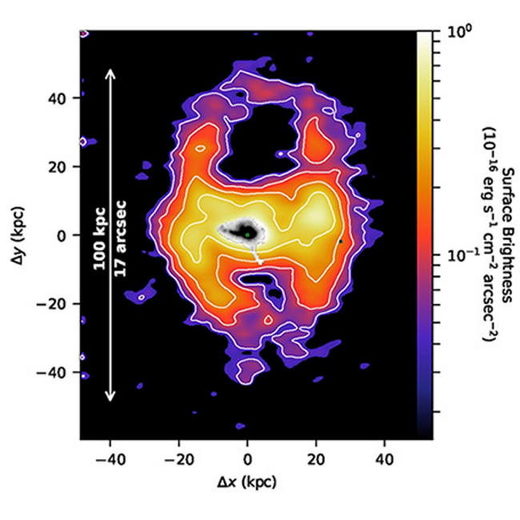 © Gene Leung (UC San Diego)
The giant galactic wind surrounding the massive, compact galaxy Makani. The colors and white contour lines show the amount of light emitted by the ionized gas from different parts of the oxygen nebula, from brightest (white) to faintest (purple). The middle part of the image (black) shows the full extent of the galaxy, though most of the galaxy is concentrated at the center (the tiny green circle). The axes show distance from the center of the galaxy in kiloparsecs.

Putting together the rest of the puzzle required data from the Hubble Space Telescope and the Atacama Large Millimeter/submillimeter Array (ALMA). Hubble unveiled the stars in the galaxy, which in turn revealed its mass (huge) and size (compact), from which the team could then extrapolate the recent merger.

The ALMA radio data revealed the galaxy contained a mix of old, middle-aged, and very young stars, as well as, probably, an active galactic nucleus.

As for what’s producing the wind, the speed and size of the bubbles are consistent with the winds produced by mass star formation triggered by a galactic merger, as well as theoretical models of the size of these winds.

The hourglass shape of the winds is similar to ones that have been observed in other galaxies – something Rupke knows well, since he conducted a review of them released last year. The difference is the size – never before have galactic winds been seen on the scale produced by Makani.

This is what makes the difference when it comes to linking galactic winds to the circumgalactic medium.

“This means that we can confirm it’s actually moving gas from the galaxy into the circumgalactic regions around it, as well as sweeping up more gas from its surroundings as it moves out,” Rupke explained.

“And it’s moving a lot of it – at least one to 10 percent of the visible mass of the entire galaxy – at very high speeds, thousands of kilometres per second.”

It is, the team said, one of the very first direct windows into the evolving circumgalactic medium around a massive galaxy. And it’s beautiful, too.

The research has been published in Nature Astronomy.