BEST OF THE WEB: Islamic State weapons in Yemen traced back to US government: Serbia files (part 1) 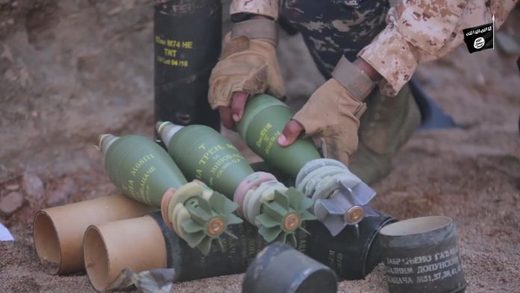 This still image taken from the Islamic State video in Yemen shows mortar shells 82 mm M74 HE lot 04/18 from the Serbian arms factory Krusik along with mortar shells from Bosnia and Herzegovina.

Recently I anonymously received explosive documents from the Serbian state-owned arms companies Krusik and Jugoimport SDPR, including e-mails, internal memos, contracts, photos, delivery schedules, and packing lists with lot numbers of weapons and their buyers. Among the leaked documents I also received scanned passports of arms dealers and government officials from the US, Saudi Arabia and UAE. They have been involved in the trafficking of at least 3 million pieces of Serbian weapons (mortar shells and rockets) to Yemen and Syria in the last three years.

Tracking the lot number of these Serbian weapons I was able to identify and trace mortar shells in the hands of Islamic State terrorists in Yemen back to their buyer – the US Government.

These documents expose the biggest lie in the US foreign policy – officially fighting terrorism while secretly supporting it. 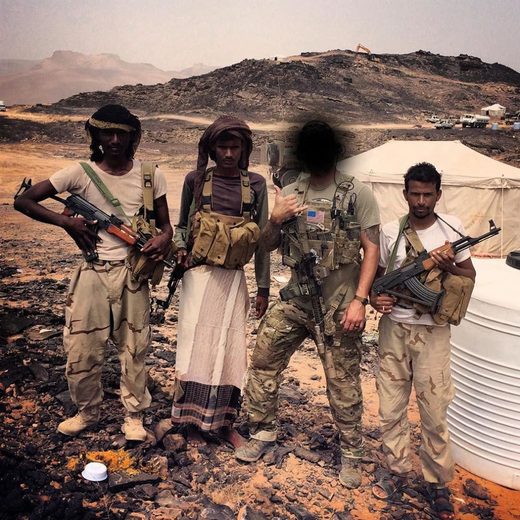 © social media
The Pentagon has deployed US Special forces in Yemen. Ironically, in Yemen the US and the Islamic State terrorists have a common enemy – the Iran-backed Houthi rebels who control the country’s north

What is at stake in Yemen? The war in Yemen is a proxy war for control over one of the poorest countries in the world. It has led, according to UN, to the world’s worst humanitarian crisis, with an estimated 24 million people (close to 80 % of the population) being in urgent need of protection and assistance. That includes two million children under-five who are starving to death. It is a war between Iran, on the one hand, and the US, Saudi Arabia and UAE, on the other hand. The Islamic State, however, also plays a significant role in this armed conflict. The terrorist group in Yemen fights mainly against the Iran-backed Houthi rebels who control Northern Yemen.

On 27 July 2019 the Islamic State group released a propaganda video featuring its branch in Yemen. The video shows barbaric scenes of atrocities including shocking scenes of beheadings of people kept in captivity by the Islamic State in Yemen. One 5-second frame shows weapons purchased by the US government in the hands of the terrorists. Here is how I discovered that. The mark on the mortar shells is clearly visible – 82 mm M74 HE KV lot 04/18. The two letters KV mean that those mortar shells were manufactured by the Serbian arms factory Krusik (K stands for Krusik and V – for Valjevo, the town where the factory is located). The following digits 04/18 mean that the mortar shells are lot 04, produced in 2018. 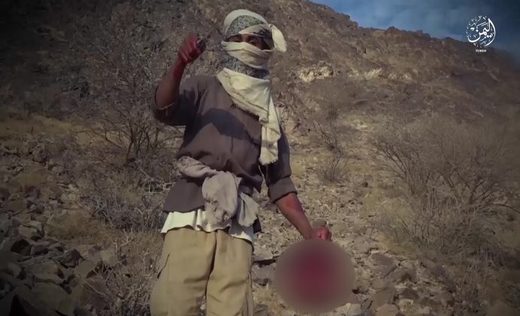 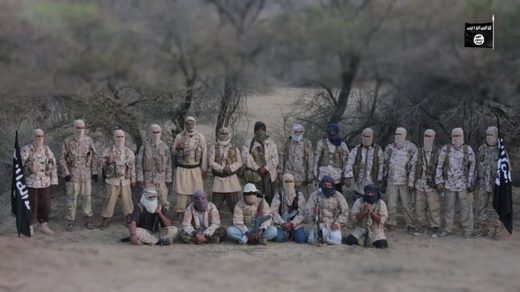 As I had already had documents about arms exports from Krusik I was able to trace back this particular lot 04/18. According to the documents, such 82 mm M74HE mortar shells KV lot 04/18 which appear in the Islamic State video in Yemen were purchased by the American company Alliant Techsystems LLC (a wholly owned subsidiary of ATK Orbital, USA) on behalf of the US Government. The exporter was the Serbian state-owned company Jugoimport SDPR. The packing list of the weapons for their export was signed on 12 February 2018. They were purchased under the contract MP00135498 between Jugoimports SDPR and Alliant Techsystems LLC, USA. The quantity of the weapons was 10,500 pcs. 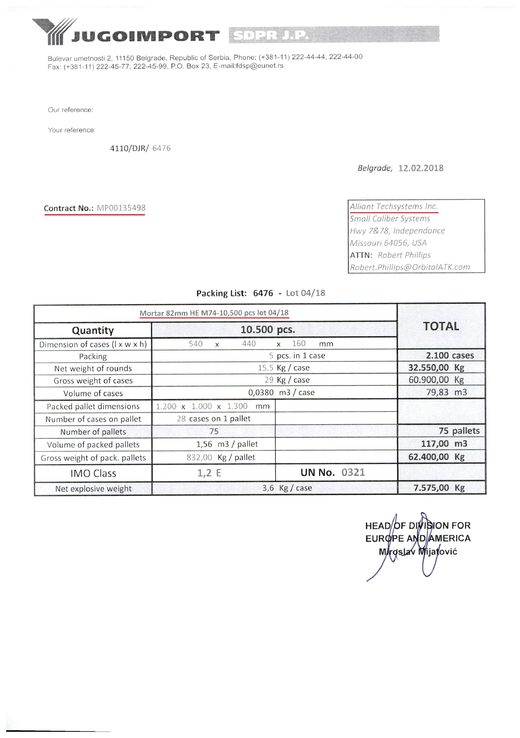 The packing list of 10,500 pcs. of 82 mm M74 HE mortar shells KV lot 04/18. The consignor is Jugoimport SDPR, Serbia and the consignee is the American company Alliant Techsystems LLC.

According to the contract MP00135498, signed on 20 January 2017, the American company Alliant Techsystems LLC purchased a total of 105,150 pcs. of 82 mm mortar shells “for the needs of the US Government” (za potrebe VLADA SAD in Serbian in the original documents). The exporter was Jugoimport SDPR, Serbia and the manufacturer – Krusik, Serbia. Both Serbian companies are state-owned and under the control of the Serbian government. The price of the deal indicated in the contract is $8,043,975.

The shipping address in the contract is LCAAP Receiving 25201 East 78 Highway, Independence MO 64056. This is the address of Lake City Army Ammunition Plant – a U.S. government-owned facility in north-eastern Independence, Missouri. However, in the attached documents the shipping address is changed to: Afghan National Army Ammo depot 22 Bankers, Pol-e-Charki, Afghanistan, Combined Security Transition Command-Afghanistan (CSTC-A CJ4). This is a lead US DoD Agency which tracks shipment delivery from issue to end user and coordinates the delivery to the ammunition depot in Kabul. 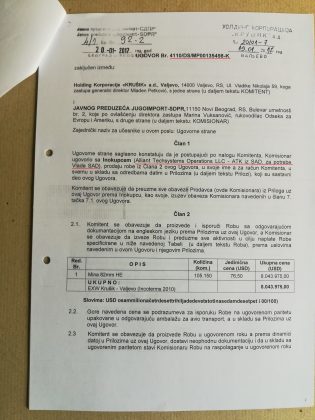 Furthermore, the documents show that Alliant Techsystems LLC purchased the Serbian weapons under a US federal contract W52P1J16D0058-0007. According to the US federal contracts registry, this is a $50,426,847 contract between Alliant Techsystems LLC and the US Department of the Army for the delivery of non US standard weapons to Afghanistan in 2017-2018. 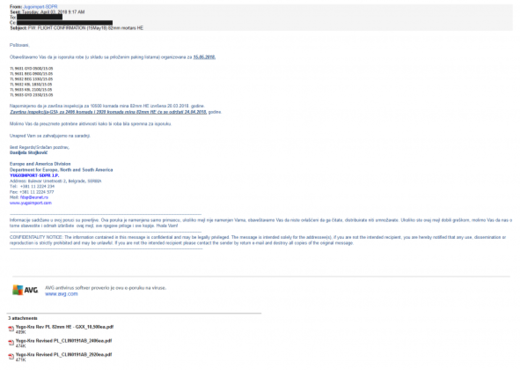 Leaked e-mail from the exporter Jugoimport SDPR to the arms manufacturer Krusik, 3 April 2018

Under the cover of NATO Operation Resolute Support

After I identified who had purchased this particular lot 04/18 in the Islamic State video in Yemen, I tracked how and when it was exported.

Leaked e-mail from the exporter Jugoimport SDPR to the arms manufacturer Krusik, 3 April 2018 1 of 4 Jugoimport SDPR sent three packing lists so that Krusik prepare the shipment for Alliant Techsystems, USA.

Leaked e-mail from Jugoimport SDPR to Krusik, 4 April 2018 1 of 5 Jugoimport SDPR sent a new delivery plan to Krusik with packing lists of weapons. The consignee is Alliant Techsytems LLC, USA.

On 17 April 2018 Jugoimport SDPR sent to Krusik the Alliant Techsystems LLC (ATK) approved delivery plan. The air company that was chartered to transport the weapons was Silk Way using a special NAG military call sign. This is a military call sign given by NATO for the operation Resolute Support in Afghanistan (see the document library below). Resolute Support is a NATO-led train, advise and assist mission in Afghanistan meaning that the weapons were supplied under the cover of this program. 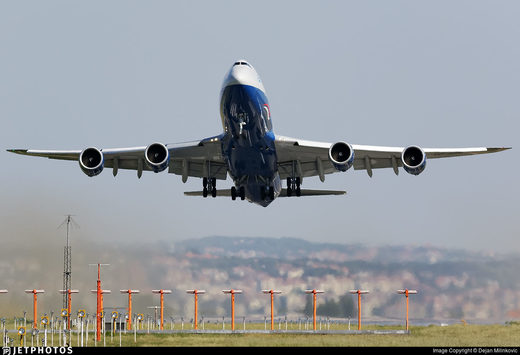 A total of 40,236 pcs. of 82 mm mortar shells HE were transported on four Silk Way flights in May 2018 with the end user being the Afghan National Police. All of them were purchased by Alliant Techsystems LLC (ATK) on behalf of the US Department of the Army under a $81.5 million US federal contract W52P1J16D0058-0006. 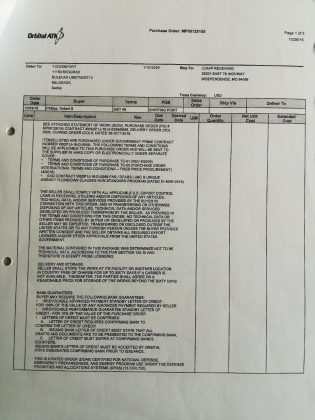 Contract MP00128155 between Krusik, Jugoimport SDPR, Serbia and Alliant Techsystems, USA 1 of 12 Alliant Techsystems LLC purchased 40,236 pcs. of 82 mortar shells HE on behalf of the US Government. The end user indicated in the contract is the Afghan National Police.

According to the US Federal contracts registry, the contract W52P1J16D0058-0006 is for the delivery of non US standard ammunition and mortar weapon systems. The country of origin is Bulgaria meaning that Bulgarian weapons were also purchased under the same Pentagon contract. 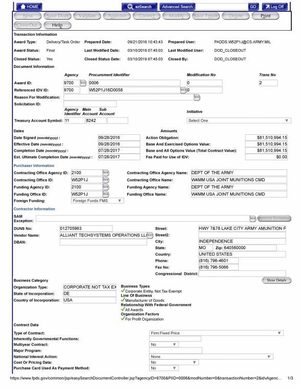 Contract W52P1J16D0058-0006 between Alliant Techsystems LLC and the US Department of the Army for the delivery of non US standard ammunition and mortar weapon systems
The country of origin indicated in the contract is Bulgaria. Alliant Techsystems also delivered weapons from Serbia. Some of them were re-exported via Bulgaria.

In the delivery plan which Alliant Techsystems LLC provided to Jugoimport and Krusik some of the Serbian mortar shells were re-exported via Burgas Airport in Bulgaria on three Silk Way flights on 25 April, 18 May and 29 May 2018. Coincidentally, Bulgarian AR-SF rifles also appear in the hands of Islamic State terrorists in Yemen in the same video as the Serbian mortar shells from Krusik. This particular type of rifle is manufactured by the Bulgarian arms factory Arsenal. 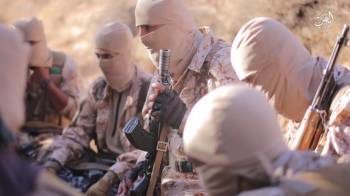 A Bulgarian AR-SF rifle in the hands of an Islamic State terrorist in Yemen. This still image is taken from the same video featuring the Serbian mortar shells from Krusik.

A leaked e-mail between Jugoimport and Krusik dated 15 March 2018 reveal that the weapons exported on papers to the Afghan National Police (lots 06/18, 07/18 and 08/18) under the Pentagon contract W52P1J16D0058-0006 were shipped to storage depot 22 Bunkers, Pol-e Charki, Kabul. The weapons (lot 04/18) in the video of the Islamic State in Yemen were also shipped to that address but with an end user the Afghan National Army.

The same storage depot 22 Bunkers, Pol-e Charki was investigated by the US Senate committee following revelations that private US contractors from Blackwater had smuggled hundreds of weapons intended for use by the Afghan Police.

Silk Way Airlines which the US Government commissioned to transport the weapons from Serbia and Bulgaria is an Azeri state-run company. Diplomatic notes which were leaked to me in 2017 revealed that Silk Way Airlines carried out 350 diplomatic flights with weapons for terrorists in Syria, Afghanistan, Yemen and Africa. The flights were chartered by the Pentagon, Saudi Arabia and UAE. The weapons were secretly offloaded in Baku, Incirlik Air Base, Prince Sultan Air Base, etc. where the planes stopped for technical landings after which they continued empty to their final destination. The new leaked documents prove that this international weapons shipment network has never ended and continue to this date.

Dilyana Gaytandzhieva is a Bulgarian investigative journalist, Middle East correspondent and Arms Watch founder. Over the last two years she has published a series of revealing reports on weapons supplies to terrorists in Syria and Iraq. Her current work is focused on documenting war crimes and illicit arms exports to war zones around the world. http://dilyana.bg/