BEST OF THE WEB: ‘It’s a tip of an iceberg’: Bulgarian journo reveals how US-purchased arms end up with ISIS in Yemen 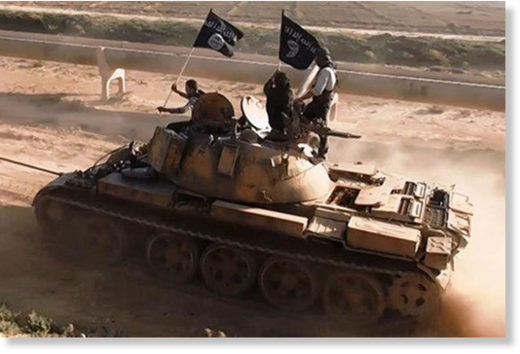 Mortar shells shown in an Islamic State propaganda video have put a Bulgarian journalist on the scent of an alleged US-run arms shipping network supplying militants in the Middle East, she told RT in an exclusive interview.

This story began back in June, when Islamic State (IS, formerly ISIS) terrorists in Yemen demonstrated several Serbian-made 82mm mortar shells in their propaganda video. Independent investigative journalist, Dilyana Gaytandzhieva, believes that the deadly munitions ended up with the jihadists after going through US hands.

Clearly visible on one of the shells is a mark that reads ’82 mm M74HE mortar shells KV lot 04/18.’ The letters KV stand for the Serbian state arms manufacturer Krusik, located in the town of Valjevo, while the digits 04/18 refer to lot 04 produced in 2018. One should not jump to any conclusions, however, as it is not the Serbs who were responsible for the shells suddenly appearing in the hands of terrorists, according to Gaytandzhieva.

A trove of “explosive” leaked documents she said she received from an “anonymous source” shows that the lot in question was part of a deal between the Serbian arms factory and a Pentagon contractor, Alliant Techsystems LLC. It was part of a purchase of more than 100,000 such shells “for the needs of the US government.”

“In the shipping documentation and on the labels on the mortar shells’ containers, there is a name of… the importer… that purchases the weapons on behalf of the US government,” the journalist told RT, citing the documents.

“There are indications and information about a US federal contract, under which these weapons were purchased, and this is absolutely verifiable in the case of Alliant Techsystems LLC, the company, which purchased the mortar shells and this particular lot of weapons pictured in the ISIS video in Yemen.”

Some leaked documents published by Gaytandzhieva do indeed mention a contract between Alliant Techsystems LLC and the Pentagon, which was allegedly aimed at supplying the Afghan National Army. “This lot was purchased under a $50 million contract between Alliant Techsystems and the US DoD for the delivery of non-standard US weapons to Afghanistan,” the journalist said.

Gaytandzhieva believes, however, that this case is just the tip of the iceberg. It could be a part of a far-reaching arms supply scheme involving up to “three million pieces of weapons – rockets and mortar shells – that have been diverted either to Syria or to Yemen.”

The leaked documents, which include emails, internal memos, photos and correspondence between the American arms dealers and the Serbian arms factory Krusik, have helped Gaytandzhieva to “expose the existence of a secret US special command unit code-named “Task Force Smoking Gun.” That unit has allegedly operated an arms depo since at least 2017, which is used in shady arms shipping operations by the US and its allies.

“I found that four private American companies were US government contractors and they were commissioned by the Pentagon to deliver non-US standard weapons to different destinations. According to the other leaked documents, I found that one of these destinations was Syria.

“This is a whole international weapons shipment network,” the journalist explained to RT, adding that Saudi Arabia and the UAE are also using it for its operations alongside the US. “The scheme is using different routes and diplomatic flights diverting weapons via a third party to their final destination, which appears to be Syria or Yemen.”

Gaytandzhieva said that she investigated at least “350 diplomatic flights carrying weapons for the last three years” by the same Azeri state-run company that delivered the mortar shells to Afghanistan in 2018. “They made technical landings with stays varying from a few hours to up to a day in intermediary locations without any logical reasons such as needing to refuel the planes,” she wrote in a separate report investigating this particular issue.

“That means that this international weapons shipment network has never [ceased to exist] and continues [it operations] to this date.”

RT has managed to independently verify parts of Gaytandzhieva’s report by finding the contracts between Alliant Techsystems LLC and the Pentagon that she mentions in the US Federal Procurement Data System. It has also been established that the company has regularly worked for the US Department of Defense since at least 2016.