BEST OF THE WEB: Will Europe stand with US hooliganism, or stand by its treaty obligations to Iran? 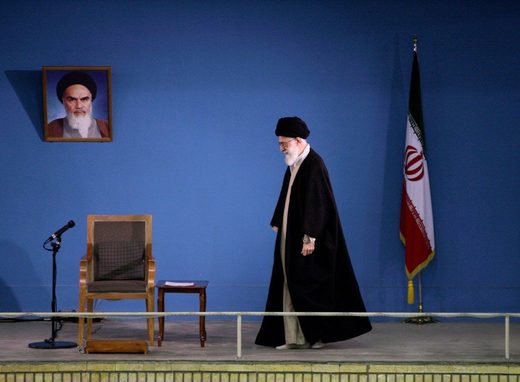 Since the Iranian revolution took power in 1979, the world stood against Iran because it is an “Islamic Republic”, unwilling to acknowledge and bow to US dominance of the Middle East and the entire world. I say the world because the revolution was followed by the Russian Perestroika and the fall of the Soviet empire that had been a countervailing superpower to the US. Furthermore, Iran has been ruining US arms sales — notwithstanding the exuberant amount invested by Middle Eastern countries whose leaders consider a protection fee to the US rather than a necessity — to the Middle East, establishing unheard of rules of engagement and spoiling US plans for a “new Middle East”. It is responsible for jeopardising the security and expansion plans of the chief US ally in the region, Israel. Although many experts (and dual national) officials and academics in the West have in-depth knowledge of Iran, decision-makers have been unable to find the right policy and words to bring Iran to a negotiation table.

Sanctions on Iran are nothing new. The “Islamic Republic” took over the country 40 years ago and the Iranians have lived under sanctions ever since. President Carter banned imports of Iranian oil, froze $12 billion in Iranian accounts, and banned all US trade with and travel to Iran in 1980. President Reagan declared Iran a state sponsor of terrorism, opposed international loans, authorised naval escorts for ships in the Persian Gulf, and imposed an embargo against Iranian imports. President Clinton (executive order 12959) expanded sanctions, banned all kinds of US investment and any involvement in the Iranian petroleum industry. President George W. Bush froze assets of people, groups, foreign entities and businesses dealing with, helping or supporting Iran. President Obama banned Iranian foodstuffs and carpets, imposed sanctions on the IRGC and ceased dealing with financial institutions that do business with Iran’s central bank.

Despite all these sanctions, the leader of the revolution is said to be in control of assets worth tens of billions of dollars. Sayyed Ali Khamenei dug into the pot of the National Development Fund (NDF) not long ago, withdrawing four billion for missile capability development. In a real crisis, Iran can survive by selling a part of its oil to countries who have rejected the unilateral US sanctions, smuggling hundreds of thousands of barrels daily to the “grey market” in order to augment its oil exports.

Sanctions are thus nothing new for Iran, despite their harsh effects on Iranian society, and will not affect the regime itself. Moreover, Iran has taken upon itself a vow to support the “just struggle of all downtrodden peoples” and rejects all forms of imperial domination. Its constitution (articles 3, 152 and 154) calls for the complete elimination of imperialism and foreign influence over Iran. The Iranian leadership has clear limits and objectives.

Iranian Leader Sayyed Ali Khamenei has enough financial power to continue supporting all groups and partners in the Middle East regardless of how long the sanctions persist. The US-Israeli threats have consolidated the goal of Iran to finance, arm and support all its partners in the Middle East so that, in case of war threatening Iran’s national security and existence, it will not be alone and can significantly harm its enemies.

Iran precision missiles , cruise missiles, and drone capabilities have harmed US arms sales in the region in the long term by showing that US weapons do not work as advertised. Iranian drones have even hit a US Patriot missile, showing the limitations of the US competitor to the Russian S-400 system.

By sending missiles to Lebanon, Iran has helped Hezbollah develop the capacity to cause severe damage to Israeli oil platforms, harbours, civilian and military infrastructure, its tanks, airports, boats, and to create new rules of engagement notwithstanding the overwhelming superiority of the Israeli Air Force, navy, infantry, and advanced military hardware.

Moreover, Iran’s fast intervention in Iraq in 2014 following the fall of Mosul and 40 per cent of Iraqi provinces, spoiled US plans to divide the country. Iran helped turn the Iranian popular mobilisation group, Hashd Al-Shaabi, into a dominant force on the model of the Sepah-e Pasdaran (Revolutionary Guard Corps – IRGC). The Sepah was created to protect the country and the “value of the revolution” when the west controlled half of the Iranian army under the shah. Today Iraq faces a similar situation, where the US controls many elements within the Iraqi army. Even so, the Hashd Al-Shaabi, with its robust ideological commitment, will stand by Iran for decades to come.

Also, in Syria, dozens of nations (including the US, Europe, Saudi Arabia, Qatar and Turkey) failed to effect regime-change, notwithstanding massive financial and military hardware investments. The support of Iran and its allies and Russia’s intervention after September 2015 proved more effective than the terrorist forces drawn from some one hundred countries and sponsored by the West and its allies. A stable government in Damascus spoiled the US-Israeli plan to create a failed state and divide Syria. Israeli Defence Minister Moshe Ya’alon said that he would “prefer that IS (Islamic State terror group) be in control of the territory (Syria)”.

The costly and sophisticated US weapons sold to Saudi Arabia and the UAE proved incapable of overpowering Yemen and the Houthis. They failed to secure the safety of tankers which suffered sabotage in the UAE, and they failed to prevent attacks on other tankers navigating in the Gulf, to prevent the bombing of two Aramco pumping stations in Saudi Arabia, and to prevent target Saudi airports and Patriot missiles battery.

Iran is today a major dominant Middle Eastern player and, by strengthening its allies, it has managed to prevent the US from imposing a “New Middle East“. It negotiated and signed a non-binding nuclear agreement with Western powers in 2015 when the Obama administration realised that sanctions were useless and wanted to slow down Iran’s fast progress towards full nuclear capability, including military-grade material.

Iran was not so gullible as to sign an agreement based on blind trust between the signatories. The agreement created a balance between Iranian hardliners and pragmatists by including clauses allowing it to partially and fully withdraw in case of non-compliance. Iran has shown its patience in waiting for 14 months before taking its first warning step, increasing its uranium enrichment percentage from 3.67 to 4.5 per cent purity. Whether Iran reaches 20 per cent (considered Lower Enriched Uranium, but the most challenging target to reach) or 70 per cent (Highly Enriched Uranium), this progress will be a gradual warning, allowing Europe enough time to distance itself from the US, while still not reaching levels adequate for producing a bomb. The weapons-grade level is 80-90 per cent.

European governments base their notion of law and order on Enlightenment principles and use these to appear legitimate. The European states are caught between their relationships with the US and the commitments they have made to Iran. Its leaders will be challenged to stick to the JCPOA agreement they have signed (France, Germany and the United Kingdom).

Iran doesn’t want to project weakness in any of its negotiation discussions or in the steps it is taking. It is in no position to pull back from the responses to the US embargos it has promised unless Europe offers meaningful relief – a significant economic facility to bypass some of the US sanctions. It is crucial for Iran to show it is saving its face, that it is preserving national pride and the dignity of its people and not backing down on its gradual withdrawal decision, mainly since it was the US president who revoked the nuclear agreement.

President Donald Trump is offering the world a new model of hooliganism: I grab anything I want, I take what I wish, everything is mine without consideration for any other nation or individual, and everybody has to pay us for protection. US values are no longer respected in the world at large and Washington is no longer considered a partner or potential intermediary in any world crisis.

As the UK ambassador to Washington Sir Kim Darroch described Trump “radiating insecurity” and the White House as “a uniquely dysfunctional environment”, it is clear that the US will be incapable of any reliable and stable deal with Iran as long as Trump remains in office. From the day Trump ends his first or second mandate, a long interval will be necessary before nuclear talks with Iran can be resumed. Iran’s only remaining interlocutor is Europe, even if little can be expected from the divided Old Continent. However, the possibility of war between the US and Iran (and the rest of the Middle East) increases dramatically if Trump is re-elected. Iran is aware of this, considers Trump has good chances to win a second mandate and is preparing along with its allies for a possible future war.

Proofread by: C.G.B and Maurice Brasher

This article is translated for free to many languages by volunteers so readers can enjoy the content. It shall not be masked by Paywall. I’d like to thank my followers and readers for the confidence and support. If you like it, please don’t feel embarrassed to contribute and help fund it for as little as 1 Euro. Your contribution, however small, will help ensure its continuity. Thank you.