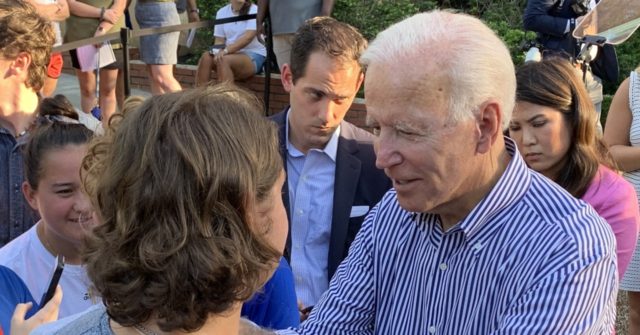 He keeps claiming that President Trump called neo-Nazis “very fine people” — when, in fact, Trump was referring to non-violent protesters on both left and right, and said, “I’m not talking about the neo-Nazis and the white nationalists, because they should be condemned totally.”

Biden launched his campaign with the lie, and it is the centerpiece of his stump speech. He repeats it several times per day, even though he gets his own story wrong (“Charlotte” instead of “Charlottesville,” or “very good people” instead of “very fine people”).

He repeats it even though Breitbart News confronted him with the facts last month at the Iowa State Fair, and pointed them out to his communications staff as well.

Biden does not care. He just keeps lying.

Worse, Biden embellishes upon the lie. He tells his audiences that Trump said the neo-Nazis were “very fine people” after being asked about the murder of Heather Heyer, who was killed when a racist fanatic drove his car into the counter-demonstrators.

In fact, Trump said her death could be called “terrorism.” In Biden’s telling, Trump said her murder was all right, thereby encouraging neo-Nazis and white supremacists to commit more acts of violence.

Biden also tells his supporters that Trump was making a “moral equivalence” between racists and those who oppose racism. He did nothing of the sort.

Trump was making a moral distinction — praising those people on all sides who use non-violent protest, and condemning those on all sides who resort to violence. Biden ignores the fact that some of those who opposed the neo-Nazis in Charlottesville were Antifa thugs who use violence at every opportunity.

It gets worse: in speech after speech, Biden has been telling his supporters that there is a “direct line” between the president’s rhetoric on migration and the mass shooting in El Paso, Texas, earlier this month.

The link, he says, is the word “invasion.” Trump used it to describe masses of people crossing the border illegally; the shooter railed against a “Hispanic invasion of Texas.” But Biden leaves out that the shooter also said Trump did not inspire him.

Biden also tells his supporters that Trump is going to give in to his “worst instincts” in the coming months, as he faces a tough re-election campaign, or struggles to manage the economy, or whatever. As a result, Biden warns, there will be more violent crimes against immigrants — part of a deliberate campaign by the president to distract Americans from his other failures (whatever those may be).

In so doing, Biden is dividing Americans further — and, ironically, increasing the risks of violence.

At his town hall in Greenville on Thursday night, a Biden supporter ripped the hat off a pro-Trump heckler in the back of the room. The pro-Trump heckler and his wife were ejected; the man who attacked them was allowed to stay and take selfies with Biden.

Mild stuff, so far, but it could easily become worse: if Trump wants to kill you, what isn’t justified?

And yet Biden has the audacity to claim that he, and his party, stand for “unity over division,” “hope over fear,” and “truth over lies” (or, as he put it in Iowa, “truth over facts”).

The media accuse Trump of failing to rebuke supporters who shout crazy things at rallies. A woman at a Biden town hall in Gaffney on Wednesday yelled, “Get rid of the orange Hitler!”; Biden liked it.

Biden is guilty of what he accuses Trump of doing. And he is getting away with it.

Joel B. Pollak is Senior Editor-at-Large at Breitbart News. He earned an A.B. in Social Studies and Environmental Science and Public Policy from Harvard College, and a J.D. from Harvard Law School. He is a winner of the 2018 Robert Novak Journalism Alumni Fellowship. He is also the co-author of How Trump Won: The Inside Story of a Revolution, which is available from Regnery. Follow him on Twitter at @joelpollak.