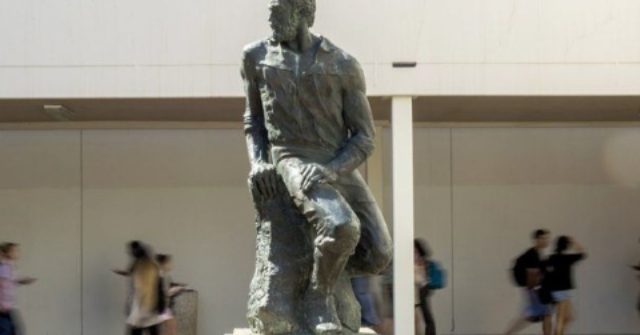 California State University is eliminating its 60-year-old “Prospector Pete” mascot, over accusations that gold miners in the 1840s were racists against California’s indigenous populations.

The mascot was born in the 1940s when the university’s founding president, Pete Peterson, exclaimed that the school had “struck the gold of education.” Giving rise to the idea of using a 49ers-styled gold prospector as a mascot, Fox News reported.

But now some say the mascot is a symbol of the “racism” perpetrated by many white prospectors against the native Indians when whites began streaming into the area after the big 1848 gold strike at Sutter’s Mill near Coloma, California, about 50 miles west of Sacramento.

A statement by the university said the Gold Rush was “a time in history when the indigenous peoples of California endured subjugation, violence, and threats of genocide.”

With complaints mounting, last year the university removed its decades-old Prospector Pete statue that once stood at its Long Beach campus.

Now Prospector Pete has also been eliminated as the school’s mascot. Students have been asked to consider replacing the gold miner with a new mascot. Some replacements include Pelicans, Sharks, Stingrays, and other sea creatures. Officials also say having no mascot at all is an option.

University President Jane Close Conoley will have the final say on a new mascot.