Centuries-old ‘witch marks’ in Creswell Crags, England can finally be seen thanks to 3D modeling 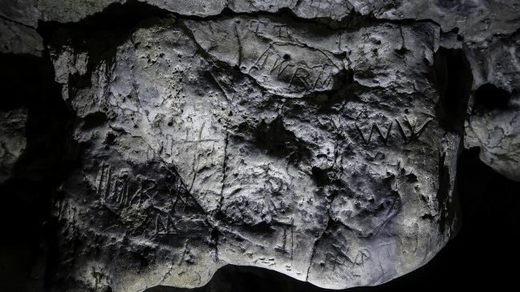 © Creswell Crags Museum and Heritage Centre
A cave at Creswell Crags in the U.K. contained hundreds of marks upon its walls, carved to ward off evil.

Mysterious “witch marks” that were carved into a cavern’s walls centuries ago to ward off evil are getting a public viewing, thanks to 3D modeling and animation.

The marks were discovered earlier this year in Creswell Crags, an enclosed limestone gorge in the United Kingdom that houses a cave used by humans during the Ice Age, Creswell Crags Museum & Heritage Centre representatives said in a statement. But humans were also using the cave during the medieval period, covering its walls and ceilings with so-called witch marks as a form of protection against evil spirits and witches.

During a tour in February, a team of cavers spied marks on the cavern walls that had previously gone unnoticed, or were dismissed as modern graffiti. Further investigation revealed hundreds of marks; carved emblems such as these were common in the medieval U.K., etched around doorways, windows and fireplaces to keep evil spirits out, site representatives said in the statement.

A chamber that held the most witch marks was inaccessible to the public, but site officials partnered with researchers at Sheffield Hallam University in South Yorkshire, England, to scan the marks and create a virtual tour of the remarkable sight, university representatives said.

Protective witch-mark carvings are also known as apotropaic marks, from the Greek word “apotrepein,” which means “to turn away.” The variety of marks in the cave is extraordinary: There are references to the Virgin Mary in the inscriptions “PM” (for “Pace Maria”) and in double “V” engravings (“Virgin of Virgins”), according to the Creswell Crags statement released in February. Some marks are designs resembling boxes, mazes and diagonal lines, and are thought to represent devices for trapping evil.

Not all of the cave’s walls contain markings. But when archaeologists found and excavated the cave in the 19th century, they widened its chambers and possibly destroyed surfaces bearing marks, according to the statement. However, the hundreds of protective carvings that remain make up the most abundant collection of witch marks in the U.K.

University researchers scanned the marks with a technology called lidar — light detection and ranging — which creates maps by pinging a surface with lasers and then measuring the reflected light. Photogrammetry will map the surfaces in 3D, creating a virtual cave that will make the marks accessible to the public and to scientists; the team recently produced an animated preview of the virtual tour, sharing the footage on Vimeo.

The limestone cave is thought to have formed naturally, through water erosion hundreds of thousands of years ago, and the rock is around 260 million years old, a representative with Creswell Heritage Trust told Live Science in an email.

“Artifacts found in the cave are mostly from the Ice Age — when creatures and early humans took shelter in there. These include bones of creatures such as hyenas and horses, and flint tools used by early humans,” the representative said in the email. 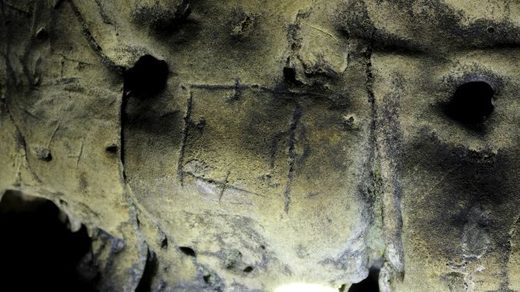 “The most important find is the earliest example of colored art in Britain — the shape of a horse scratched into a bone and colored with ochre, which is over 12,000 years old.”

The witch marks were inscribed into the cave walls between the 16th and 19th centuries, likely by generations of local people who added to the existing marks over time, according to the email. However, it’s unknown what motivated them to apply so many layers of protective wards on the cave walls and ceiling. It’s possible that they were created during times of crop failure or disease outbreaks, and people may have viewed the caves as a passageway for evil spirits to reach the surface from a subterranean hellscape below, said Duncan Wilson, a chief executive at Historic England.

“Even two hundred years ago, the English countryside was a very different place, death and disease were everyday companions and evil forces could readily be imagined in the dark,” Wilson said in the February statement. “We can only speculate on what it was the people of Creswell feared might emerge from the underworld into these caves.”