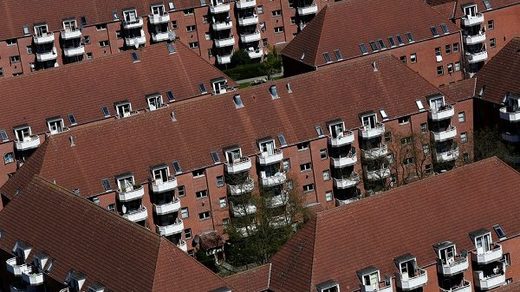 © Reuters / Andrew Kelly
Blocks of houses are seen in Mjolnerparken, a housing estate the “Ghetto List”, in Copenhagen, Denmark.

In a last-ditch attempt to save several residential areas from being labeled as “severe ghetto,” which, under a controversial law, would lead to their demolition, the Danish city of Odense plans to pay local criminals to move out.

“You were convicted in 2019? Then you have the opportunity to get help to move,” say the posters that emerged across several neighborhoods of Odense over the weekend.

What looks like a shady ‘help’ offer from a mafia boss, is actually a legit proposal from the municipality and housing agencies in Denmark’s third largest city of Odense. The offer is simple: those living in the neighborhoods who were sentenced earlier this year are eligible for a “relocation grant.”

The municipality is ready to pay the convicted criminals 15,500 krones (around $2,200) and to provide them with relocation aid if they agree to move elsewhere. While the bizarre offer is advertised as a chance to get a “fresh start” for such people, in actual fact the program seems to be a last-ditch attempt to save several of the city’s neighborhoods from getting labeled as “severe ghettos.”

Speaking of life in the ghetto

In Denmark, calling a neighborhood a “ghetto” is not an insult, but an official label. The list of “ghettos” is published by the Transport, Construction and Housing Ministry annually since 2010 – and currently, there are 29 locations on the list with 15 of them designated as “severe ghettos.”

To get on the list, an area has to have over 50 percent of residents of non-Western background, and an unemployment rates of 40 percent, as well as meet education criteria – or, rather, the lack of it. The number of convicts living in the would-be ghetto should be at least three times higher than the country’s average. As the ghetto evaluation affects areas with 1,000 or more residents, even a small number of ‘wrong’ people moving in can tip the scale.

Staying on the ghetto list for four years, in turn, makes a residential area a “severe ghetto.” Such designation brings severe consequences for the neighborhood, that include demolition of entire housing blocks and a forced relocation of the residents. Such drastic measures to “re-develop” troubled areas were approved last year, coming as a part of the legislation, commonly known as “ghetto package.”

The passing of the ‘ghetto package’ came as part of the government’s efforts to force migrants to integrate into the country’s life – instead of living in their own “parallel societies,” as Danish officials put it. The numbers of migrants of non-Western origins – as well as their Denmark-born children – have expanded greatly in the past decades, growing from some 50,000 in the 1980s to nearly half-a-million, according to current official figures. The trend appears quite alarming for the small Nordic country, which has an estimated population of 5.7 million.

Reward guilty to save the innocent?

While the plan sounds outlandish, the city of Odense basically faced the choice of rewarding a few criminals now – and punishing them later, alongside quite a few law-abiding citizens. Moreover, the city would have been forced to spend a pretty penny on ‘fixing’ the ghetto through government-forced gentrification.

“This is a choice between plague and cholera. If we fail to get 12-14 criminals out of the area, it will end up on the hard ghetto list, and then we have to demolish buildings and move residents. I want to avoid that at all costs”, Dybro said.

“You can just say that the ghetto package does some things to us that no one had seen coming. Here we reward the wrong ones. It is, after all, unreasonable and fundamentally contrary to our sense of justice, but we do it for the sake of the 99 percent who could not imagine their housing being torn down,” Michaelsen said, defending the plan.