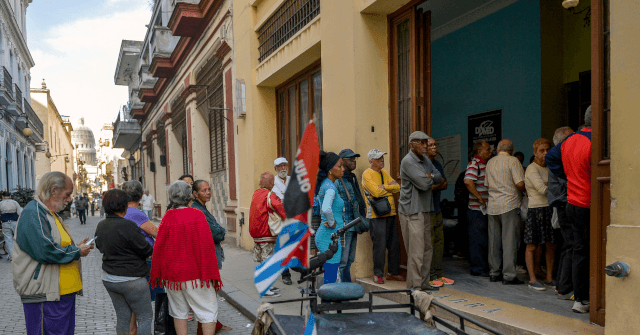 Cubans stuck for hours in lines to buy basic goods like eggs, chicken, oil, and soap are sharing photos of their ordeal under the hashtag #LaColaChallenge, or “The Line Challenge.” The challenge is a tongue-in-cheek way to approach a crisis so pervasive that reports surfaced Thursday of mothers “renting” their children to ensure families have enough to eat.

The communist Castro regime announced new measures last week to ration basic food items in the face of growing economic shortages triggered by the collapse of the Venezuelan economy. Since the rise of late socialist dictator Hugo Chávez, Cuba has heavily relied on Venezuela for oil and profits. Cuba pays Venezuela by sending thousands of doctors, soldiers, and intelligence officials to help bribe and repress the people into submission.

The regime has blamed President Donald Trump for the shortages and claimed that the Cuban people support their limited access to food.

The #LaColaChallenge hashtag appears to prove differently. The originators of the hashtag, Norges Rodríguez and Taylor Emilio López, posted an image of themselves on April 26 successfully buying two liters of cooking oil, a feat that has become significantly more difficult since the May 10 restrictions.

“Oil has arrived in [Old Havana] and we were the first buyers. They sell two liters a person,” Rodríguez wrote.

“Take a selfie on a line in Cuba and join #LaColaChallenge,” he tweeted, adding “we [are not continuity],” using a hashtag that translates to “we are continuity” popularized by the regime following the ascent of Miguel Díaz-Canel to the second most powerful position in the country, president. The hashtag is intended to imply that the Díaz-Canel government is a continuation of the repressive Castro regime, dispelling hope that the new president would move Cuba closer to a free capitalist system.

The couple run the independent website YucaByte, which the site describes as “a Cuban communications project focused on Information and Communication Technologies and their impact on society.” Their social media presence regularly criticizes the communist regime and both participated in Havana’s “illegal” LGBT pride parade last week that ended when plain-clothes communist repressions violently assaulted and hauled away several of the leaders of the march. The regime has since scheduled a communist LGBT event to overshadow last week’s march – the largest unauthorized assembly in Cuba in decades – in Camagüey, hundreds of miles from the capital.

The hashtag took off as Cubans with smartphones began uploading photos of the extensive lines they endured onto social media, particularly Twitter.

Even some apparent supporters of the regime posted photos of the lines to claim that they were not so bad and that their local store had a larger stock of products than anticipated.

“The idea came about while I was waiting on line with my partner,” Rodríguez told Miami’s Nuevo Herald last week. “We were waiting to buy oil … it had been a few days since we saw it anywhere. Before that line we had waited on a line to buy chicken and on another line for six hours to buy a plane ticket.”

Food shortages began triggering protests late last year, when the government first ran out of wheat for bread and other baked goods. At the time, Díaz-Canel’s officials claimed that Cuba had run out of bread because several wheat mills nationwide had broken down and the government did not have the parts to repair them, adding that the alleged “embargo” against Cuba by the U.S. government was largely to blame.

By April, shortages had expanded to oil, eggs, and chicken, the only widely available meat in the country. Facing fears of a second “special period” – the phrase the communist regime uses for the poverty following the collapse of the Soviet Union in the 1990s – dictator Raúl Castro warned, “It is not going to be like the acute phase of the Special Period in the 1990s … but we have to always prepare for the worst case.”
Last week, the Cuban regime expanded its rationing and severely limited the legal amounts of foodstuffs each family could buy. Cuba’s interior commerce minister defended the policy on television on Wednesday, blaming “hoarders” for buying too much food and claiming that Cubans “consider these [rations] good and even insist on us continuing to ration products.”

Videos of chaos outside of the few shops that can procure sufficient chicken to feed the large crowds appear to indicate otherwise, as do reports of Cubans inventing new ways to avoid the ration limits. The latest trend, according to several Cuban interest news outlets, is for mothers of young children to “rent” their child to others, at the price of $1, so that others can claim twice the number of rations: one set of rations for them, and one for their false child.