Fact Check: No, CNN, Hurricane Dorian is Not Evidence of Climate Change 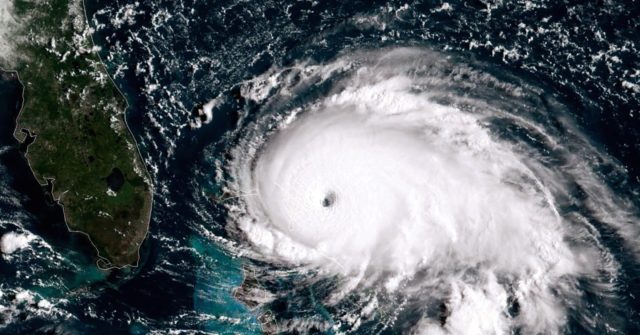 VERDICT: FALSE. Hurricanes are not increasing in number or intensity in the Atlantic yet, although they could (slightly).

CNN claimed constantly throughout its seven-hour climate change town hall on Wednesday evening that Hurricane Dorian is a) the direct result of climate change, and b) is a sign of more frequent and intense storms to come.

Erin Burnett: “The storm comes as we are facing a catastrophe of unprecedented proportions. … Scientists tell us we have only 11 years — so that’s until 2030 — to cut global pollution by half if we want to avoid the very worst consequences of the climate emergency. Think bigger fires in the West or deadlier heat waves, supercharged storms like the one we have seen now, Hurricane Dorian, which is hovering off the coast of the Carolinas as I speak.”

Anderson Cooper: “So tonight CNN is dedicating an entire night to the climate emergency and how the top 10 Democratic presidential candidates plan to address this urgent threat. We’re coming to you, of course, tonight just as Hurricane Dorian, the strongest storm anywhere on the planet this year, has decimated parts of the Bahamas and is threatening the East Coast.”

Chris Cuomo: “Now, right now, Hurricane Dorian is hovering off of the East Coast of the United States. We’re seeing storms that are intensifying, and that’s just one sign of the dangerous world that scientists tell us we’re entering if humans don’t cut carbon pollution in half in the next 11 years, and then to net zero by 2050. … [S]cientists tell us consistently that we are seeing more intense storms, more frequently, that are more complicated by the effects of climate change.”

Don Lemon: “The scientists say that humans only have 11 more years to avoid the catastrophic consequences of this crisis. Food shortages, rising sea levels, more extreme weather events, like Hurricane Dorian which is turning toward the Carolinas as we speak.”

But that is simply not true. The National Oceanic and Atmospheric Administration (NOAA) reports, after extensive review of the data and the associated studies, that “the historical Atlantic hurricane frequency record does not provide compelling evidence for a substantial greenhouse warming-induced long-term increase” (original emphasis). In fact, the NOAA’s model predicts that there will be fewer Atlantic hurricanes (though rainier ones).

On a global scale — i.e. beyond the Atlantic, where Dorian formed — the NOAA agrees that climate change due to warmer temperatures will cause hurricanes to be more intense. But they will likely only be 5% more intense than they are now, at least in the Atlantic, and there is little evidence to suggest a large increase in hurricane numbers.

[N]either our model projections for the 21st century nor our analyses of trends in Atlantic hurricane and tropical storm activity support the notion that greenhouse gas-induced warming leads to large increases in either tropical storm or overall hurricane numbers in the Atlantic.

Therefore, we conclude that it is premature to conclude with high confidence that human activity–and particularly greenhouse warming–has already caused a detectable change in Atlantic hurricane activity.

We also conclude that it is likely that climate warming will cause Atlantic hurricanes in the coming century have higher rainfall rates than present-day hurricanes, and medium confidence that they will be more intense (higher peak winds and lower central pressures) on average.

The NOAA’s models for the Pacific suggest increasing cyclone intensity in some areas, and decreasing intensity in others. That makes sense, because the ocean is a complex system. The fact that average water temperature may be warm does not mean that storms will be more intense in the places where storms form due to currents and winds.

So CNN’s claims are bogus. Yet the network — whose motto is “Facts First” — presented them as truth.

The apparent purpose is to alarm the public and encourage them to support the Democrats — the self-described party of “science” — in their plans to ban fossil fuels, raise energy costs, eliminate millions of jobs, and control consumer choices.

Joel B. Pollak is Senior Editor-at-Large at Breitbart News. He earned an A.B. in Social Studies and Environmental Science and Public Policy from Harvard College, and a J.D. from Harvard Law School. He is a winner of the 2018 Robert Novak Journalism Alumni Fellowship. He is also the co-author of How Trump Won: The Inside Story of a Revolution, which is available from Regnery. Follow him on Twitter at @joelpollak.