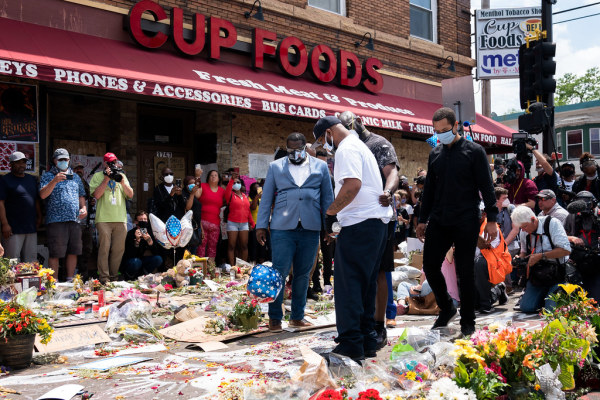 The third day of Derek Chauvin’s trial began on Wednesday with three minutes of questioning for the off-duty firefighter Genevieve Hansen. Hansen, who was initially questioned on Tuesday, was chastised by Judge Peter A Cahill for reacting combatively to the defence’s questions. The court then summoned Christopher Martin, the 19-year-old store attendant who accepted the counterfeit note from George Floyd on May 25th 2020.

At the beginning of the prosecution’s direct questioning, Martin confirmed that he had been working as an attendant at Cup Foods for two months prior to May 25th. As an attendant, he worked the cash machine, sold cigarettes, and helped customers with the deli counter.

The prosecution exhibited CCTV footage from inside the store on May 25th, asking Christopher Martin to confirm his, his co-workers’, and Mr Floyd’s identities. The video showed Mr Floyd conversing with the store attendants for some time, removing banknotes from his pockets and sorting them.

As time went on, Mr Floyd’s demeanour became abnormal. Mr Floyd proceeded to sway, rubbing his face multiple times before erratically moving in a dance-like fashion. The video clearly shows Mr Floyd conversing with Mr Martin and the other store attendants, walking back and forth, placing his hands above his head and bouncing up and down. Later, on cross-examination by the defence, Martin confirmed Floyd appeared to be “stretching” and performing “side lunges.”

The prosecution then questioned Mr Martin about his conversation with Floyd as he sold him cigarettes. Mr Martin asserted that the pair had spoken briefly about sports and that Mr Floyd appeared to be on a “drug of some kind”:

“It kind of took him a little longer to get to what he was trying to say, so it would appear that he was high.”

The prosecution then questioned Mr Martin on his action of “holding up” a banknote he’d been given by Mr Floyd. Martin asserted the note had a “blue pigment to it” which lead him to believe “it was fake.” Mr Martin said that the store had a policy that required clerks to cover the cost of fake bills, and stated that he had asked a manager what to do. Martin confirmed that his manager had told him to approach Mr Floyd in his vehicle to seek payment.

CCTV from a restaurant across the street was then shown by the prosecution. Martin explained how he had conversed with Mr Floyd and the passenger in the car, and how Mr Floyd had refused to return to the store to settle the issue of the counterfeit bill. Martin then confirmed that the manager of Cup Foods had instructed a co-worker to call the police.

The prosecution proceeded to question Mr Martin about officer Derek Chauvin’s restraint of Mr Floyd and the conduct of the other officers. Martin confirmed:

“George was motionless, limp, and Chauvin seemed very – he was in a resting state, meaning like he just rested his knee on his neck.”

Defence attorney Eric Nelson then took to the stand for his cross-examination of Christopher Martin. Martin confirmed that he had had a “pleasant interaction” with Mr Floyd in the store, “talking about sports and things of that nature,” but asserted that he “had formed the opinion that Mr Floyd was under the influence of something based on a delay in his speech and response and trouble with forming words.”

Nelson then asked Martin about the “two further interactions” he’d had with Mr Floyd outside of the store. Martin indicated that he had encouraged Mr Floyd and the passenger to come into the store to deal with the payment – specifically, “telling them they had used a counterfeit bill,” imploring them to either “pay for the cigarettes or talk to the manager.” Martin stated that Mr Floyd had not engaged in the conversation, “shaking his head, putting his hands up and putting his head back.” He then indicated that a heated conversation had occurred when Mr Floyd and the passenger “outright refused” to come back into the store, the passenger ripping another $20 bill and throwing it on the ground. Martin then confirmed that the manager had decided to call 911, explicitly telling the operator that Mr Floyd seemed to be “under the influence.”

Martin asserted that Floyd seemed “very friendly” but “he did seem high,” confirming he had felt that the entire situation “could have been avoided” if he “had not taken the bill.”