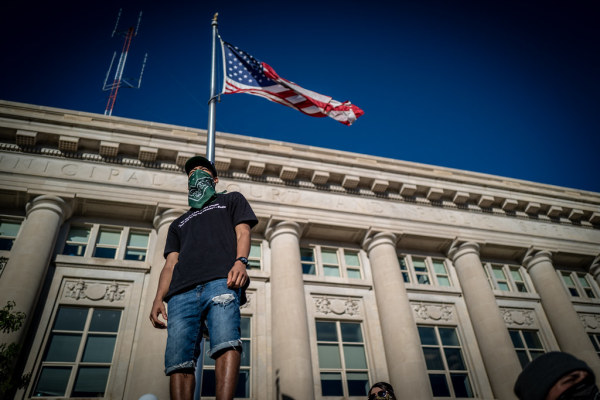 On Wednesday, court proceedings in the Derek Chauvin trial resumed with the questioning of the prosecution’s expert witness, Sergeant Jody Stiger of the Los Angeles Police Department. Questioning of Sgt Stiger, who has been retained by the prosecution as an expert witness on use-of-force tactics and policy, had initially begun on Tuesday but was cut short after Judge Peter A. Cahill adjourned the court.

“Officers pulled [George Floyd] back out of the squad car onto the street, indicating that Mr Floyd went to his knees on the ground and said thank you to the officers. The officer’s then pushed him flat onto the ground into the prone position and you saw Mr Floyd kick with one leg while being pushed prone. Your testimony is that a reasonable officer could have interpreted that kick as being active aggression or active resistance.”

Prosecutor Schlieter then directed Sgt Stiger to “pick up [his] testimony there,” indicating that he would emphasise the “restraint period . . based on [Stiger’s] review of the body-worn camera footage.” Sgt Stiger confirmed that the restraint had begun at 20:19:14 and ended at 20:28:43, making its duration nine minutes and twenty-nine seconds. Sgt Stiger confirmed that in such a time period, the “use of force would need to be reasonable.”

The prosecution then exhibited a series of pictures detailing officer Chauvin’s positioning atop George Floyd. The prosecution directed Sgt Stiger to provide “additional detail” based on his analysis, with Sgt Stiger confirming that “[Chauvin’s] knees [appeared to be in a position] utilising his bodyweight, his left knee being in the neck area of Mr Floyd and his right knee being in the back area.” From another angle, the prosecution directed Sgt Stiger to explain, based on his experience, “where the majority of the defendant’s bodyweight [would have been], given the position of the left knee, the right knee, and the feet.” In response, Sgt Stiger asserted that Derek Chauvin’s “feet [had been] spread apart and on the ground,” exerting his weight through his knees.

The prosecution then directed Sgt Stiger to read three bullet points from the Minneapolis police department (MPD) policy. Schleiter specifically emphasised a bullet point stating “whether the suspect poses an immediate threat of safety to the officer or others,” and focused on Sgt Stiger’s understanding of the policy in light of the 9-minute video. Sgt Stiger confirmed that the restraint had not been justified, stating:

“Sir, do you have an opinion, to a degree of reasonable or professional certainty, how much force was reasonable for the defendant to use on Mr Floyd after he was handcuffed, placed in the prone position, and not resisting?”

Derek Chauvin’s defence attorney Eric Nelson then took the stand for direct examination of Sgt Stiger. Nelson began by focusing on Sgt Stiger’s previous experience, or lack thereof, in court as a police expert in the use of force. Sgt Stiger replied he had none. Nelson then touched on the fact that Sgt Stiger’s entire use-of-force experience was with the Los Angeles Police Department in the state of California, and was therefore unfamiliar with the use-of-force laws and policies of Minnesota. In preparation for the trial, Sgt Stiger confirmed that he had received an “extensive amount of MPD training materials, investigative reports and videotapes” from the prosecution. However, Sgt Stiger eventually conceded that he had not seen the materials in as much detail as previously thought, the prosecution having left videos out from the MPD’s training presentations. Sgt Stiger confirmed that he had relied on the amalgamated materials to form his opinion on the case, and thus that the exclusion of these videos was problematic. Hired by the prosecution to create a report “detailing his opinions and findings of the case,” Sgt Stiger confirmed he had been sent 5737 separate training materials.

Nelson and Sgt Stiger proceeded to delve into MPD policy. Both of them highlighted the US Supreme Court case of Graham v. Connor, a seminal case on police use of force, which had previously been touched upon by the prosecution. Nelson evoked the incorporation of Graham v Connor into departmental policies, with Sgt Stiger confirming that the use of force in Minnesota “exists primarily from a state statute consistent with the Graham v Connor factors.” Nelson used this to attack Prosecutor Schleiter’s earlier claim that the three highlighted bullet points in the MPD use-of-force policy – severity of crime, threat of suspect, and resistance of suspect – were the only factors that should be considered in a case. Referencing the Supreme Court case, Nelson then posited:

“In fact, what the ultimate police department policy says here, is because the test of reasonableness under the 4th amendment is not capable of precise definition or mechanical application, its proper application requires careful attention to the facts and circumstances of each particular case – including those three factors. The reasonableness of a particular use of force must be judged from the perspective of the reasonable officer, on the scene, rather than with the 20/20 vision of hindsight.”

Sgt Stiger agreed with Nelson’s argument and confirmed that “the calculus of reasonableness must embody an allowance for the fact that police officers are often forced to make split-second judgments in circumstances that are tense, uncertain, and rapidly evolving.” Notably, Sgt Stiger confirmed that an officer would need to take the totality of the circumstances into consideration when making a decision on the use of force. Nelson proceeded to unpack Sgt Stiger’s testimony that officer Chauvin’s actions constituted “an excessive use of force.” Arguing that the real question in the case “is whether it was an objectively reasonable use of force,” Nelson argued that there are many layers to the decision to employ the use of force, outlining an extensive list of factors officers might be considering. Sgt Stiger agreed to all, confirming that officers go into situations with a “higher sense of awareness.” He stated:

“Based on my training, once you put your uniform on and once you respond to a call, we know that there is a risk factor (we just don’t know what level), depending on the severity of the call. Every time an officer responds to a call, there is an inherent risk.”

Nelson then navigated Sgt Stigler through MPD policy and his use-of-force analysis, asking if the use-of-force is viewed in a vacuum, ignoring the present factors in a situation. In response, Sgt Stigler stated:

“No, we do not – we should not. In some agencies, the only thing they focus on is the use of force. When I do my analysis, I look at the totality of the circumstances, meaning I look at the officer’s tactics as well as the subject’s actions during the entirety of the incident.”

Nelson then argued that this same scope should be applied to the case of George Floyd and Derek Chauvin, asking Sgt Stigler: “Do we not need to look objectively at all of the facts in assessing whether or not the use of force was reasonable, agreed?” Sgt Stigler agreed.

Nelson proceeded to unpack the facts of the case. He stated that, as an officer, Mr Chauvin would have had to rely on the relevant information given by dispatch, who advised him that Mr Floyd was still on scene and the incident was a “priority one response call – meaning ‘get there quick’.” Mr Chauvin was also told that the suspect was 6’6” tall and that he was, possibly, under the influence of drugs. Sgt Stigler confirmed that the information provided to Mr Chauvin by dispatch would “set the stage in terms of the inherent risks,” affirming that he had “seen small people put up bigger fights than bigger people,” therefore justifying Mr Chauvin’s heightened state of awareness.

Diving into Sgt Stiger’s personal experiences as a police officer, Nelson asked him if he had experienced specific resistance to arrest by other arrestees. Sgt Stiger confirmed that he had encountered suspects who attempted to feign a physical ailment and fake a heart attack, confirming that an officer would need to consider whether such claims were lies. On the topic of George Floyd’s denial of drug use during the arrest, Stiger confirmed that he had observed a white substance around Floyd’s mouth, agreeing that this was consistent with drug usage. To reiterate the point, Nelson exhibited a video in which he believed George Floyd had said “I ate too many drugs,” but Sgt Stiger did not agree that this is what Floyd said. Ultimately, Sgt Stiger agreed “100%” that an officer would have to take into account a suspect’s actions when applying the MPD’s use-of-force continuum, affirming that Chauvin would have been entitled to simply draw his taser and use it on Floyd, but decided to pursue a less severe form of force.

Moving on to a different point, Nelson proceeded to rebuke the prosecution’s suggestion that Chauvin’s conduct was criminal after failing to de-escalate the situation. Nelson touched on the officer’s intent of initially considering hobbling Mr Floyd. Sgt Stiger confirmed that not doing so avoided an escalation of force under MPD policy. Notably, Sgt Stiger then confirmed that it would constitute an appropriate use of force to maintain restraint of a suspect until emergency medical services arrived. After a short break, Nelson targeted the prosecution’s continued suggestions that the crowd observing Floyd’s arrest should have played no role in the officers’ perception of risk. Referring to MPD training materials, Sgt Stiger conceded that “crowds are dynamic, and non-violent crowds can quickly become violent,” even in the case of a crowd of ten to twelve people. Sgt Stiger also confirmed that words voiced in a particular tone – such as those by Donald Williams II – could “heighten a reasonable officer’s perception of risk” and that the MPD itself trained officers to consider potential signs of aggression in crowds.

Then, in a tactic similar to Tuesday’s questioning of MPD use-of-force trainer Johnny Mercil, Nelson asked Sgt Stiger if the act of placing a knee on the base of the neck across the shoulder blades was an appropriate use-of-force technique in the correct circumstances. Like Mercil, Sgt Stiger replied “yes,” confirming that he had been trained in the same technique. Nelson then touched on the absence of physical injury to Mr Floyd, with Sgt Stiger confirming that, often, “uses of force leave injuries on a suspect.” Nelson attempted to bring Sgt Mercil to concede that “the weight of a human being, placed in a particular area,” would leave injury, but Sgt Stiger declined to answer. In response, Nelson posited that medical doctors might be “able to answer better,” to which Sgt Stiger agreed.