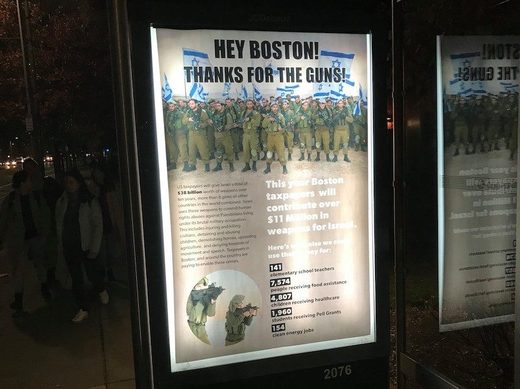 Yesterday a Palestinian solidarity group in Boston posted photographs of ads opposing US military aid to Israel that were put up in Boston bus kiosks. Richard Colbath-Hess, who has placed Palestinian solidarity ads in Boston in the past, says that the group doing this action is anonymous because such ads are banned, and these ads were placed in kiosks in guerrilla manner, swapped out for existing ads. “The Massachusetts Bay Transportation Authority took down our ads twice over about a year,” he says of his own efforts. “The first time we got the ACLU to get the ad back up then they banned political ads entirely. The governor got involved. Most subways in the country have followed suit.”

Colbath-Hess is in touch with the organizers of the latest ad, and he sent along this press release from a group calling itself the “Center for Accurate Reporting on Palestine.” -Editor.

This week, members of the Center for Accurate Reporting on Palestine opened many bus station kiosks in and around Boston, Massachusetts, and replaced advertisements for commercial products with posters explaining that the good people of Boston lose out on social programming, education, and clean energy because $11 million of this city’s taxes go towards buying guns for Israel every single year.

The majority of Democratic Party voters now support ending or conditioning military aid to Israel because of its ongoing war crimes and human rights violations against Palestinians. This is in accordance with U.S. law, specifically the Leahy Law which states that “No assistance shall be furnished…to any security forces of a foreign country if the Secretary of State has credible information that such unit has committed gross violations of human rights.” The evidence of the Israeli military’s abuses is abundant, whether in its illegal occupation of the West Bank; the politically motivated imprisonment and torture of critics – including children and human rights defenders – or the siege of Gaza that deprives a civilian population of fuel, food, building materials, and even medicine.

Just last week, the world recoiled in outrage after seeing a video of an Israeli soldier shooting an unarmed Palestinian in the back while he was in retreat with his hands up. The reason? A grotesque form of entertainment. The evidence is staring the world in the face, yet the U.S. government continues to funnel more military aid to Israel than every other country in the world combined. 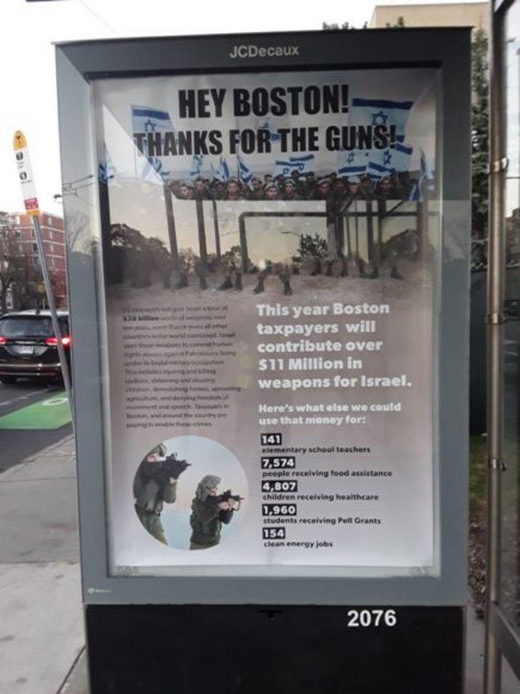 For these reasons and more, the Center for Accurate Reporting on Palestine firmly supports ending military aid to Israel. Yet in order to do that, we need to have a public debate. Most mainstream news publications still speak about Palestinians in egregious tropes, preferring to lionize Israel even as its military shoots protesters, bombs civilians, and attacks human rights advocates. Despite popular support for conditioning military aid, most contenders for the Democratic presidential candidates have refused to broach the topic. That’s why we believe in finding new ways to bring this important issue into the public eye. We want to inform every voter across the country of the consequences of unconditional military aid, both in terms of damages to Palestinian people and their freedoms, but also the missed opportunities we bear back at home when our taxes aren’t used on social programs here in Massachusetts.

We hope that their message has been seen and absorbed because the millions of dollars of military aid to Israel that is subsidized by Boston taxpayers could be spent in much better ways. We could hire 141 teachers in our public schools, or help 7,574 people who need food assistance. We could give out 1,960 Pell Grants to support access to higher education, or give 4,807 children health insurance. We could subsidize 154 jobs in the clean energy sector. Frankly, we could flush all $11 million of it down the toilet, and it would still be put to better use than it is now.

We hope that everyone who saw our message or reads this statement is inspired to make a statement, take a stand, and use their vote to end this absurd practice of subsidizing human rights abuses. Perhaps in the future, the Israeli military will not receive a single penny from the taxpayers of Boston.