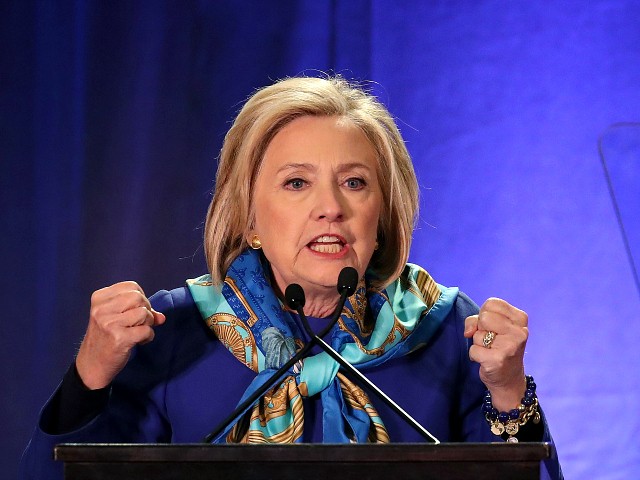 Failed presidental candidate Hillary Clinton revisited what she saw as corrupt patterns in American elections in 2016, warning 2020 Democrats of the threats they faced running against President Donald Trump.

The former Secretary of State spoke at an event at Georgetown University and said she had spoken to “many” of the 2020 Democrat presidential candidates and left each of them with an ominous warning.

“You can run the best campaign, you can have the best plans, you can get the nomination, you can win the popular vote, and you can lose the electoral college and therefore the election,” she warned.

Clinton said she told every candidate that they would get their emails hacked, referring to her campaign manager John Podesta who fell for a phishing attempt to get access to his private Gmail address.

“If you have not had your personal and campaign emails hacked, they will be,” she warned, adding that the information would be “stolen and weaponized against you in the most pernicious ways.”

“Remember Pizzagate? WikiLeaks?” she added wryly, referring to the “horrible kinds of outcomes we saw before when people believed pizzagate.”

She demanded the press and the public immediately discredit weaponized hacked information in future elections.

She pointed to the “so-called deep-fake” videos online such as the one of Nancy Pelosi appearing drunk in a video that Facebook declined to take down, as they believed social media users could decide for themselves whether it was true or not.

“How can you decide for yourself when what is presented is blatantly false and manufactured?” she asked with exasperation.

Trump and some online media outlets, she insisted, were creating a crisis in the United States.

“Racist and white supremacist views are lifted up in the media and in the White House,” she said.

She warned of “disturbing” efforts by the president’s campaign to distribute “propaganda” on social media.

“The Trump campaign is already spending hundreds and hundreds of thousands of dollars on Facebook each week to spread fake endorsements and outright lies about the Democrats,” she said.

Clinton cited “voter suppression” in the 2018 midterm elections where Stacy Abrams “should be the governor” of Georgia and Andrew Gillum lost his race for Florida Governor because the election “neither free nor fair, and certainly not transparent.”

She cited a study from 2016, noting that anywhere between 27,000 to 200,000 Wisconsin voters were turned away from the polls on election day for having incorrect voting information, suggesting that’s why she lost in 2016.

Clinton also claimed that the suppression of the black vote was also part of the reason she lost.

“I was the first person who ran for president in more than 50 years without the protection of the Voting Rights act and let me tell you, it makes a difference.”

She also brought up a case where Russians had accessed two online voting systems in Florida, as evidence that foreign powers could directly change voting tallies in the state.

“Think about that. A direct assault by a foreign advisory on a state’s election system and citizens of that state and our country can’t know about it?” she asked.

Clinton said the reports she mentioned were only the “bare minimum” of what really happened in the election, citing the Mueller report as evidence of widespread Russian interference in the election.

She theorized that her support for “free and fair elections” when she was Secretary of State was part of the reason that Vladimir Putin hated her so much.

Clinton also alluded that authorities leaders like Putin, Mussolini, and Hitler “changed the rules” of elections to keep themselves in power, hinting that Republicans were doing the same things.

“They believed in elections all right, they believed ‘one and you’re done,’ get in, change the rules to perpetuate your own power to grow your own authoritarian rule,” she said.