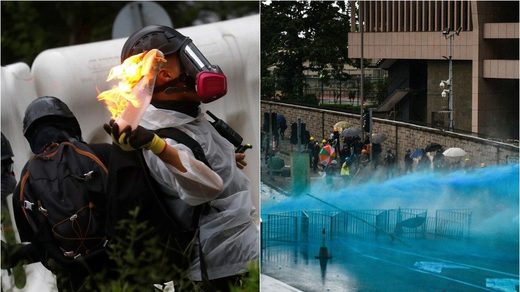 The ongoing turmoil in Hong Kong escalated on Saturday when protesters in the autonomous area of 7.4 million people threw Molotov cocktails and bricks at police, with law enforcement resorting to gas grenades and water cannon.

Numerous protesters, some clad in black fatigues and yellow helmets, thronged the streets of Hong Kong on Saturday, kick-starting the 13th consecutive weekend of anti-government unrest.

At one stage, a large police barrier protecting a government premises was set ablaze.

The situation grew more violent as demonstrators engaged in clashes with riot police, attacking them with a slew of petrol bombs on main roads.

Photos and videos showed rioters priming their Molotov cocktails before hurling them at approaching officers.

Sporadic clashes did not die down by Saturday evening, with protesters using homemade incendiary bombs to set fires at several locations. Simultaneously, several units of Hong Kong police teamed up to dismantle barricades erected by demonstrators at key road junctions. 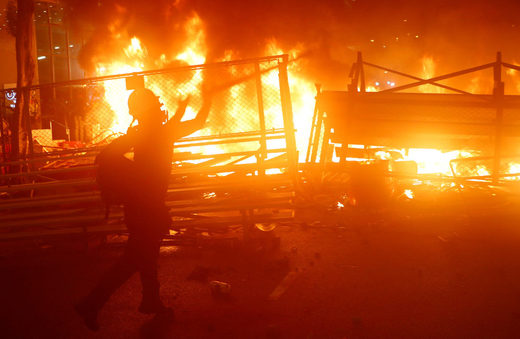 The Saturday gathering had not been permitted by Hong Kong authorities and protesters defied a ban and flocked to the streets anyway.

They appeared to be well-prepared for confronting law enforcement as many of them were seen wearing protective goggles, gas masks and even carrying shields. 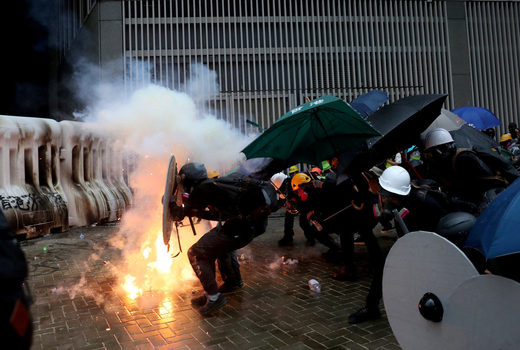 Violent unrest has been occurring in the former British colony for over twelve weeks in a row, initially inspired by public outrage over a controversial bill allowing for the extradition of Hong Kong convicts to mainland China. The proposed legislation was dropped but the protest snowballed into a wider anti-government sentiment among citizens.

As the demonstrations grew larger, Beijing accused the US and other Western nations of backing the most vocal anti-government protesters, and of challenging Chinese rule over the territory.

Earlier on Saturday, the Chinese government lashed out at Senate Minority Leader Chuck Schumer (D-NY), Representative Jim McGovern (D-MA) and the White House itself, who urged the release of “dissenters” who’d been arrested for confronting police.

The statements by the Americans “flagrantly interfered with Hong Kong affairs” and unmasked “the hypocrisy, hegemonic thinking, and prejudice of American politicians,” Beijing declared.

Comment: China has a different view of the protests. From RT:

China has denounced US lawmakers and officials for openly supporting the ongoing demonstrations in Hong Kong, describing their comments as hypocritical and motivated by Washington’s desire for global dominance.

In a statement, Beijing said that it “deplores” remarks made by Senate Minority Leader Chuck Schumer (D-NY), Representative Jim McGovern (D-MA) and the White House, regarding the increasingly violent street protests in Hong Kong. The US lawmakers and officials demanded that Hong Kong’s government release individuals involved in the ongoing unrest, or face consequences.

“The remarks have distorted the truth, condoned the offenders, flagrantly interfered with Hong Kong affairs, which are China’s internal affairs, and again revealed the hypocrisy, hegemonic thinking, and prejudice of American politicians,” the statement read.

The office stressed that Hong Kong police had arrested protesters suspected of violence, a “crime which cannot be justified by any aspirations.” The statement said that China was “rock-firm” in defending its sovereignty over Hong Kong, and that the Chinese people would “never be frightened by threats or intimidation.”

On Saturday, demonstrators were seen throwing Molotov cocktails at police, who responded by firing water cannons and tear gas.

Beijing has repeatedly accused Washington of providing direct and indirect support to protesters in the semi-autonomous territory, and has even alleged that the US is “insanely involved” in anti-Chinese extremism in Hong Kong.

The Chinese foreign ministry warned the Trump administration that it should not “stick their noses in our affairs,” issuing a reminder that Hong Kong is a Chinese territory and is neither “American” nor “English.”

The White House has said that it “firmly rejects” the notion that the US is sponsoring or inciting the demonstrations, claiming that its concerns about human rights and democracy in Hong Kong are valid and genuine.

How can anyone take the U.S. government’s statements seriously when they are running the same playbook that brought Ukraine down? UPDATE: RT has multiple videos of barricades on fire, and demonstrators armed with clubs and rods, throwing rocks and other projectiles at police. Things are heating up in Hong Kong.