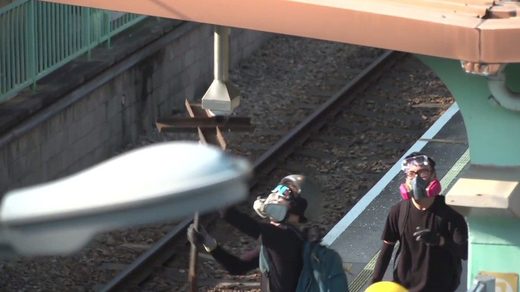 Hong Kong police have fired tear gas at protesters, who vandalized a train station, erected barricades and started fires, in the latest anti-Beijing demonstration there this weekend.

The Chinese city is enduring its 16th consecutive week of street protests, which initially were aimed at blocking a controversial extradition law but which have continued long after that legislation was dropped. On Saturday thousands of protesters gathered in Tuen Mun, a satellite town located in the New Territories.

Some surreal footage was filmed in the small town, showing activists cowering behind a barricade they’d erected and were hurling bricks by the dozen -and some petrol bombs- with no law enforcement even close.

The rationale was that a littered road would be more difficult for the police to advance on their positions. Earlier at the same spot fellow protesters were raining umbrellas down on their battle-preparing comrades.

The violence on Saturday came on the heels of a protest march that had been touted as an event against so-called Damas, female singing and dancing performers who favor the Tuen Mun park and who are perceived as a nuisance by many residents. This was done to obtain a permit for gathering.

The slogans changed to the usual demands of “freedom for Hong Kong” as soon as the march started. Some protesters in front of the town hall tore down and tried to set fire to the Chinese national flag, leaving few doubts about their agenda. Their fire-starting skills, however, left much to be desired.

Transit services were suspended in the area as operators feared the protest would disturb passengers. A light rail station was shut down while buses passing through the area were diverted.

The precaution seems to have been justified as some of more-militant protesters vandalized the station.

Spent police munitions were later collected by the protesters and shown to reporters and others covering the event.