Imran Khan: ‘No rational human being can talk of a nuclear war’ 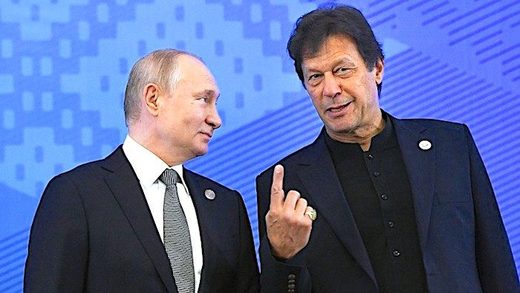 The further escalation between nuclear-armed rivals India and Pakistan may lead to “unimaginable” fallout so the world must intervene to help avoiding that, Pakistani Prime Minister Imran Khan told RT in an exclusive interview.

The “explosive” situation in Kashmir could escalate “way beyond” the Indian subcontinent, Khan told RT’s Paula Slier. He reminded that it would be “the first time [when] two nuclear-armed countries come face-to-face after the Cuban crisis” of 1962. “No rational human being can talk of a nuclear war.”

The Indo-Pakistani standoff took a turn for the worse after New Delhi revoked the decades old autonomy of the part of disputed Kashmir it controls. Khan urged the world community to help preventing the conflict from spiraling into “a nuclear hotspot” with “unimaginable” consequences.

Comment: More from RT, 13/9/2019: Khan interview ‘I expected world to react much more to Kashmir’

Talks between India and Pakistan alone aren’t enough to resolve the ongoing Kashmir standoff anymore, but the global reaction has so far been too weak.

“Sadly, I would have expected the world to react much more than it has,” he said. The PM noted that some states may be unwilling to disrupt trade with India. “I feel that [to the world community] markets, trade, material gains – I’m sad to say – are much more important than human beings.”

Khan promised that Pakistan will continue to raise the issue of Kashmir at the UN and even file a case to its judiciary, the International Court of Justice.

“Every forum we will use. We will knock on every door… No one should expect that now any bilateral talks between India and Pakistan are going to solve anything. That stage is long gone.”

Russia and Pakistan should give their relations a fresh start. Moscow could be part of the solution to the Kashmir crisis. …although Moscow and Islamabad were on opposite sides of the barricade during the Cold War, it is time to put the past behind and start anew.

“The world has changed. We should develop a new relationship – and I hope we do,” he stressed. “I hope now Russia would get closer to Pakistan.”

After India controversially revoked the self-governing status of Kashmir last month, Pakistan has been peddling for an international response to the tensions there.

The PM noted that Russian leader Vladimir Putin is “a big voice in the world,” while Russia remains among the “main powers,” along with the US and China.

“If these three powers decide, they can resolve most of the world’s issues,” Khan said – including Kashmir, “the most explosive issue in the world today.”

“If these three powers get together – I think, they can resolve it.”

See also: PM Khan: Pakistan is ‘unfairly’ blamed for US failures in Afghanistan