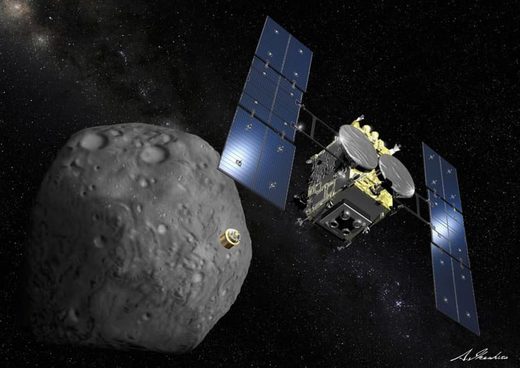 Hayabusa2 touched down on its targeted area measuring 7 meters in width, located 20 meters from the artificial crater’s center. The probe extended a tube to the surface and fired a small metallic projectile from it, successfully capturing the subsurface debris as it floated up.

The Hayabusa2 probe made a “perfect” touchdown Thursday on a distant asteroid and collected samples from beneath the surface in an unprecedented mission that could shed light on the origins of the solar system.

“We have never gathered subsurface material from a celestial body further away than the moon,” he added.

“We did it and we succeeded in a world first.”

The fridge-sized probe made its second landing on the asteroid around 10:30 a.m., with officials from JAXA breaking into applause and cheers at the mission control room in Sagamihara as initial data suggested the touchdown had been a success.

Confirmation of the landing came only after Hayabusa2 lifted back up from the asteroid and resumed communications with the control room.

“The probe moved perfectly and the team’s preparation work was perfect,” he said.

With the collection of samples, the probe’s mission is almost complete, and it will start its journey back to Earth at the end of this year.

“We are only at the stage of getting hold of (the samples) and we have to operate (the probe) carefully in order to bring them back,” Tsuda said.

Hayabusa2 touched down on its targeted area measuring 7 meters in width, located 20 meters from the artificial crater’s center. The probe extended a tube to the surface and fired a small metallic projectile from it, successfully capturing the subsurface debris as it floated up, the agency said.

The brief landing Thursday was the second time Hayabusa2 has touched down on the asteroid, which is about 300 million kilometers from Earth.

The complex multiyear mission has also involved sending rovers and robots down to the surface.

Ryugu’s surface has weathered due to the impact of solar winds but the subsurface samples are believed to have materials that can be traced to when the solar system was born some 4.6 billion years ago. These dark-colored samples may possibly contain organic materials and water, according to JAXA.

Hayabusa2’s first touchdown was in February, when it landed briefly on Ryugu and fired a bullet into the surface to puff up dust for collection, before blasting back to its holding position.

The second touchdown required special preparations because any problems could mean the loss of the precious materials already gathered during its first landing.

As JAXA officials confirmed the probe’s landing, some 200 people also cheered at nearby Sagamihara City Museum while watching a live broadcast from the control room. 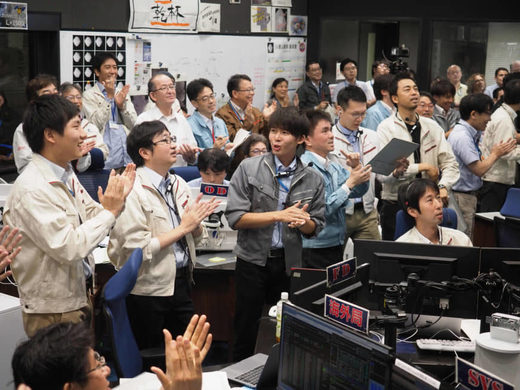 © AFP-JIJI
Researchers and employees at Japan Aerospace Exploration Agency (JAXA) celebrate after receiving confirmation of Hayabusa2’s touchdown on the asteroid Ryugu, at the mission control room in Sagamihara, Kanagawa Prefecture, on Thursday.

Some shouted “Congratulations” as they snapped photographs and took videos of the screen showing the control room.

“I want the rock samples to be safely brought to Japan,” said Jyutaro Haga, an 11-year-old who lives in Myanmar but returned to Japan during the summer holidays.

“I am filled with deep emotion. This project was the first in the world and I was very nervous, but I am happy that the touchdown was successful,” said a 48-year-old woman from Sagamihara.

Queen guitarist and astrophysicist Brian May sent a video to the probe’s team ahead of the landing.

“The world is watching. We love you, take care Hayabusa2,” the iconic musician told the team.

About the size of a large refrigerator and equipped with solar panels to keep it powered, Hayabusa2 is the successor to JAXA’s first asteroid explorer, Hayabusa, which is Japanese for falcon.

That probe returned with dust samples from a smaller, potato-shaped asteroid in 2010, despite various setbacks during its epic seven-year odyssey. It was hailed as a scientific triumph.

Hayabusa2’s photos of Ryugu, which means “dragon palace” in Japanese and refers to a castle at the bottom of the ocean in an ancient Japanese tale, show the asteroid has a rough surface full of boulders.

The Hayabusa2 mission was launched in December 2014, and has a price tag of around ¥30 billion. The probe is scheduled to return to Earth with its samples in 2020.

But its has already made history, including with the creation of the crater on Ryugu’s surface.

In 2005, NASA’s Deep Impact project succeeded in creating an artificial crater on a comet but only for observation purposes.