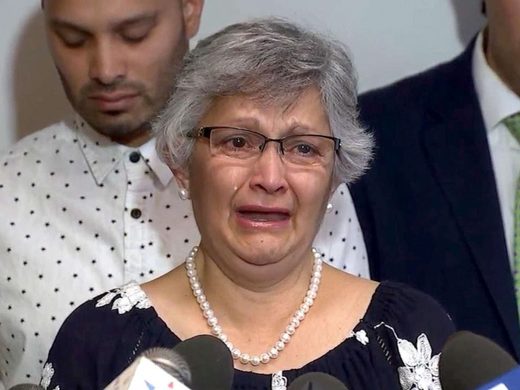 © KABC
Paola French describes the June 14, 2019, shooting at a Costco in Corona, California, that killed her son, 32-year-old Kenneth French.

The parents of a mentally ill man who was killed by an off-duty LAPD officer inside a Southern California Costco described the sequence of events that led to all three of them being shot.

On June 14, Paola and Russell French were making a routine shopping trip at the Costco in Corona, California, with their son, 32-year-old Kenneth French, to prepare for Father’s Day, their attorney, Dale Galipo, told reporters at a news conference Monday.

The family had been inside the store for 30 to 40 minutes when they stopped at a stand where a Costco employee was handing out samples of sausages, Galipo said.

Salvador Sanchez of the LAPD’s Southwest Division was also at the stand holding his young son, Galipo said, adding that what sparked the ensuing altercation is unclear.

Paola French described what happened next as her son pushing or shoving the officer, while other witnesses described it as a punch or a strike, Galipo said.

The momentum of the strike caused Sanchez to move forward, and some witnesses have said that he loss balance and “temporarily went to the ground,” Galipo said. Sanchez then allegedly handed his son to his wife, pulled out his gun and announced that he was a police officer, Galipo said.

At that point, Kenneth French was “moving away” from Sanchez, Galipo said. When his parents saw Sanchez pull out the gun and identify himself as a police officer, Russell French yelled out, “Don’t shoot. My son is sick,” Galipo said.

“I begged and told him not to shoot,” Russell French said. “I said we have no guns and my son is sick. He still shot.”

“I told officer Sanchez not to shoot twice,” Paola French told reporters through sobs. “I even said please. I was pleading for our son.”

Sanchez then allegedly fired at least eight rounds, striking all three family members, Galipo said. A man inside Costco stood and prayed over Russell French as he lied on the ground bleeding, he said.

Kenneth French was shot twice in his back, Galipo said. There were also two gunshot wounds in his armpit and shoulder area, but it is unclear if those were caused by two separate bullets or represent entry and exit wounds caused by one bullet, Galipo said.

He did not die immediately, and his cause of death was ruled as internal bleeding, Galipo said.

After the shooting, Corona Police said Sanchez was assaulted “without provocation” before Sanchez opened fire. He was placed on administrative leave days after the shooting, into which the LAPD is conducting an internal investigation. 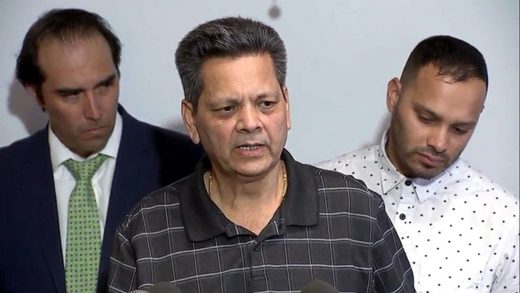 © KABC
Russell French describes the June 14, 2019, shooting at a Costco in Corona, California, that killed his son, 32-year-old Kenneth French.

Sanchez’s attorney, Ira Salzman, told ABC News on Monday that his client “reasonably” believed his and his son’s lives were in danger.

It “wasn’t a little bump in a supermarket aisle,” Salzman said, alleging that Kenneth French hit Sanchez “so hard” that he suffered a concussion.

Sanchez then withdrew his weapon and fired, “aiming right at Mr. French, who was the threat to him,” Salzman said.

“He had no other option,” he said, adding that he believes the case is justifiable homicide under California law.

Kenneth French had been diagnosed with schizophrenia and was mostly non-verbal, Galipo said.

The family waited more than two months to speak out because Paola and Russell French were recovering from their injuries in the hospital, Galipo said.

The bullet that struck Paola French in the back exited through her stomach and put her in a coma for an extended period of time, Galipo said. She required seven surgeries and is scheduled to have several more, Galipo said.

Russell French was shot in his abdomen, and the bullet did not exit his body, Galipo said. The bullet grazed his pancreas, piercing a vein, and surgeons are not sure how long it will take to repair, Russel French said.

He has also undergone several surgeries, lost a kidney and experienced infections in many of his major organs, Galipo said. French was just released from the hospital about a week ago, he said.

The couple’s younger son, 30-year-old Kevin French, was not informed of the shooting and only found out the next day through social media, Galipo said.

The shooting “drastically changed the course of our lives,” Paola French said.

Paola French described her son as a “peaceful and loving soul” who “never was threatening towards anybody at any time.” Galipo said that, “given Kenneth’s nature,” something may have happened between him and Sanchez that instigated the altercation.

Galipo described the shooting as “egregious,” stating that as a trained LAPD officer, Sanchez should have deescalated the situation, “especially when you’re in Costco and there’s innocent customers and children.”

“Shooting Kenneth, in our view, was completely excessive and unnecessary,” he said. “Shooting his parents was outrageous.”

The family is calling on authorities to publicly release the surveillance video from Costco, Galipo said.