Lee Zeldin: Israel Right, Pro-BDS Omar and Tlaib Have ‘Bad Intentions All Around’ 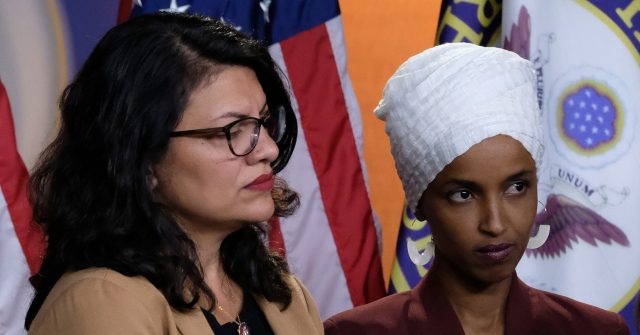 Israel’s denial of entry to Reps. Ilhan Omar (D-MN) and Rashida Tlaib (D-MI), who both support the BDS campaign, is unsurprising given their shared desire to “tear down” the Jewish state as “BDS activists,” said Rep. Lee Zeldin (R-NY) in a Friday interview on SiriusXM’s Breitbart News Daily with host Alex Marlow.

“I’m certainly not in the least bit surprised by it,” said Zeldin. “If you want to tear down another country, you shouldn’t be surprised that you’re not welcomed with open arms in that country, [and] that you may not be welcomed at all in that country.”

Zeldin added, “Israel has a policy that does not allow BDS activists into their country. It’s not just a movement filled will anti-Israel hate. It’s filled up with antisemitic hate, from the founder of BDS to college students on campuses all across our country, who, in the name of BDS, are being targeted with blatant antisemitism.”

“Israel has a policy that they chose to enforce,” Zeldin stated.

Omar’s and Tlaib’s itinerary for their proposed trip to Israel listed their destination as “Palestine,” Zeldin noted. “Tlaib and Omar have approached this entire issue dangerously wrong,” he said.

Zeldin remarked, “They need to develop a genuine interest in listening to and learning from everyone, and [not] just promoting one side and revisionist history.”

“Tlaib supports a one-state solution that removes Jews from power in Israel,” Zeldin noted. “It was just a couple of weeks ago that Rashida Tlaib was on the floor of the House of Representatives and was giving a speech equating boycotting Israel to boycotting Nazi Germany.”

Zeldin went on, “It was only three weeks ago in a House Foreign Affairs Committee, Ilhan Omar, in opposition to a resolution [opposing] BDS, she spent her entire five minutes … blaming Israel for everything.”

“[Ilhan Omar] even went so far as packaging the only reference to Hamas, that one point she made in referencing Hamas violence, both just before, during, and after that sentence, she’s packaging it in blaming Israel,” added Zeldin. “You’re blaming Israel even for Hamas terrorists? Give me a break.”

Zeldin continued, “They’re not going to point out Hamas denying humanitarian aid to their own people using women and children as human shields, calling jihad as an obligation? Where’s their outrage when a senior Hamas official just a month ago calls for the murder of every Jew or the PA’s pay-to-slay policy or Hezbollah putting together 150,000 rockets to be launched into Israel?”

“Bad intentions all around,” concluded Zeldin of Omar’s and Tlabin’s approach towards Israel.