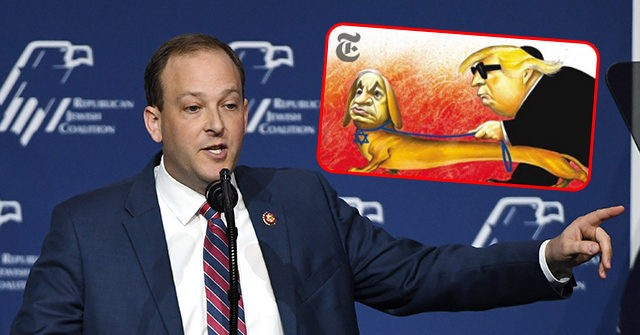 Rep. Lee Zeldin (R-NY) called on the New York Times to fire the person responsible for approving publication of what he described as an antisemitic cartoon disparaging President Donald Trump, Israeli Prime Minister Benjamin Netanyahu, and the U.S.-Israel relationship. He joined Tuesday’s edition of SiriusXM’s Breitbart News Daily for an interview with host Alex Marlow.

The New York Times, noted Zeldin, markets its as a “moral compass” within the news media landscape.

“The words that came to my mind were ‘double standard,’” said Zeldin of his initial reaction to seeing the aforementioned cartoon, “because I was thinking if I made a cartoon like that, and you replace the two faces, you change the religious symbols, and let’s say I posted it on my Twitter account, the New York Times wouldn’t just report on it. They would not just editorialize on it. They would relentlessly go after it until I submitted my resignation.”

Zeldin declared, “There needs to be an apology. The apology, by the way, should include going the President of the United States, the Israeli prime minister, and all Jews around the world.”

Zeldin continued, “You also need to fire that editor, because they have someone that is still in charge of content in that important role for their paper that thought that was  a good idea. An apology [and] a walk-black is all expected, but you would expect far more than that, especially because the New York Times so often wants to be the moral compass in the way that they editorialize on so much content. They don’t hold themselves to the same or higher standard.”

“I also believe that person should be fired when you’re talking about significant actions to be taken,” added Zeldin. “Fire that person. That person has shown horrible judgment in greenlighting that, if that process is what [the New York Times] claims it is.”

The New York Times‘s initial response did not express regret, omitting terms such as “sorry,” “apologize,” or related synonyms:

A political cartoon in the international print edition of The New York Times on Thursday included anti-Semitic tropes, depicting the prime minister of Israel as a guide dog with a Star of David collar leading the president of the United States, shown wearing a skullcap. The image was offensive, and it was an error of judgment to publish it. It was provided by The New York Times News Service and Syndicate, which has since deleted it.

Marlow cast doubt on the New York Times‘s claim that its “error of judgment” came from “a single editor working without adequate oversight,” reflecting on his role as Breitbart News’s editor-in-chief.

“Even with the apology, I found it to be an insufficient explanation in that it was just one rogue editor,” said Marlow. “I just don’t accept that. I run a much smaller publication than the New York Times and there is ample oversight to prevent something that blatantly anti-Semitic or racist to go up.”

“It strains credulity that it’s one rogue editor and yet they now suspend the process [of] painting cartoons,” added Marlow.

Zeldin highlighted the New York Times‘s editorial pretense of opposing antisemitism, “They would be out for your head at Breitbart if you did it and it would not be a one-day story. … It would be game over, lights out [for Breitbart News].”

The New York Times markets itself with the slogan, “All the News That’s Fit to Print.”