Maduro’s Back to School Message: Venezuela Is in a ‘World War’ Against America 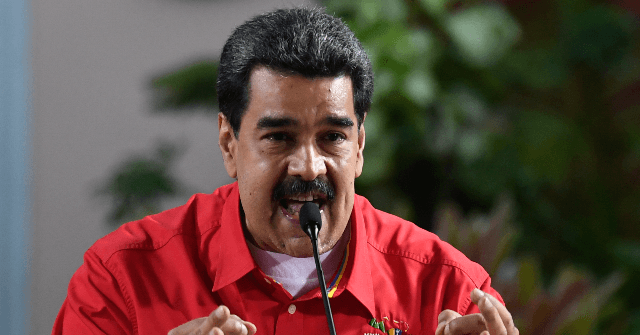 Venezuelan dictator Nicolás Maduro told students in an address marking the first day of school Monday that their country was “in a world war of an economic character” against “imperialism,” a term communists and socialists in Latin America use to refer to the United States.

Maduro also claimed that his nation, left destitute by two decades of extreme socialist economic policies, was an example to the world in offering children a dignified education and bright future.

According to UNICEF, over three million Venezuelan children are in need of dire food aid. Over four million people generally do not have access to clean drinking water and an estimated million children cannot afford to go to school due to their lack of access to food and school supplies.

“Venezuela today has one of the best education systems in Latin America and the world, let us be proud!” Maduro urged on state television Monday night. “Venezuela is the only country in the world that gives boys and girls their backpack with supplies … their uniforms, that guarantees public education to 80 percent of people, free and of high quality!”

Any inability on the part of the government to provide basic services was the product of antagonism by the United States, he claimed.

“We are here in a world war, of an economic character, with Imperialism [the United States] torturing the economic body of Venezuela,” Maduro claimed. “We move forward.”

Maduro did not specify how the United States was engaging in a “world war” by sanctioning only Venezuela for his regime’s gross human rights abuses. He also did not make the link directly between American sanctions on high-ranking Maduro officials – not the Venezuelan people – and the destitute state of the Venezuelan education system. Despite Maduro’s claims, the non-profit Save the Children explained last week:

Children’s access to education is also in great peril. Many of the millions who have left are teachers leaving behind run-down schools and emptying classrooms as less and less people can afford to send their children to school, even if it is free. When inflation is at well over 1 million percent, the cost of notebooks and uniforms becomes a ‘luxury’ to dispense with. As more and more Venezuelans move to neighbouring countries, the burden on local schools increases while the same economic hardships facing these incoming Venezuelans means the financial barriers to children going to school remain high.

Maduro moved on in his speech from education and “world war” to celebrate what he claimed was an opening “dialogue” with the “opposition” in the country. In reality, the individuals listed by Maduro’s state news service as having participated in talks with his regime are all socialist, communist, or progressive groups, all of whom have ties to Maduro.

According to VTV (state television), the participants in the “opposition” “dialogue” included the parties “Movement Towards Socialism,” “Progressive Alliance,” and “Red Flag,” a Marxist-Leninist group. No representatives of the Venezuela right, to the extent that one exists, participated in talks with Maduro.

The leftist “opposition” and Maduro signed an agreement that would allow the United Socialist Party of Venezuela (PSUV), Maduro’s party, to acquire seats in the National Assembly without having been voted in, which allows the PSUV to regain power over the only democratically elected branch of government left. The current National Assembly is run by a coalition of socialist opposition parties distinct from the socialists negotiating with Maduro today that won the majority in 2015.

Maduro celebrated that the deal “opens all the doors towards dialogue for peace.”

“Today we have signed a partial agreement with the majority of the Venezuelan opposition,” Diosdado Cabello, a drug lord that Maduro has appointed to lead the PSUV, said on Monday. “We are totally in agreement with to reintegrate into the National Assembly … we will speak to the opposition as many times as necessary.”

Maduro has largely ignored the National Assembly since he lost it in 2015, when Cabello was speaker of the assembly. Cabello went on to establish an illegal extra-governmental legislature, the “National Constituent Assembly,” to usurp power away from the rightfully elected lawmakers in the real legislature.

Notably absent from talks with Maduro was the legal president of Venezuela, Juan Guaidó. Guaidó, a member of the democratic socialist Popular Will party, became president of the country in January after the National Assembly exercised its constitutional power to remove Maduro. Guaidó has failed to consolidate any military power, however, leaving him only with the nominal title of head of state.

Guaidó entered talks with the regime, inexplicably brokered by the government of Norway, this year. The talks yielded no positive movement forward, as Maduro has refused to step down.

Following the Maduro announcement this week that he had agreed to talks with the Marxist-Leninist “opposition” instead of Guaidó, the president reiterated that he was open to talks, but only with “presidential elections as soon as possible with a new electoral council (CNE), without political prisoners, with … guarantees for all who participate in the process.”

Talks with the violently repressive Maduro regime are extremely unpopular among most Venezuelans. In the latest national poll by the data firm Meganálisis, nearly 90 percent of respondents said they opposed talks between Maduro and the opposition. A similar number (89.5 percent) said they supported “foreign military operations” on Venezuelan soil to oust Maduro.