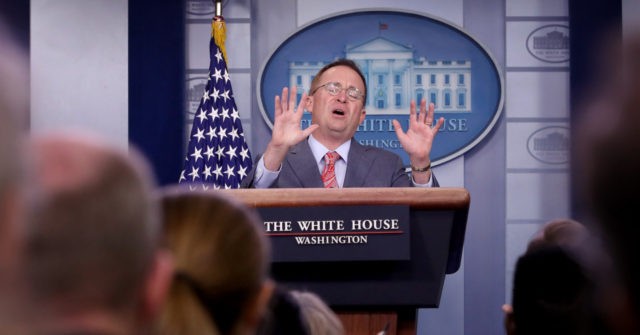 White House Chief of Staff Mick Mulvaney clarified comments he made earlier Thursday during a press briefing at the White House.

Mulvaney told reporters that President Donald Trump wanted to hold up military and financial aid to Ukraine until they cooperated with an investigation into possible meddling in the 2016 election.

“Did he also mention to me in past the corruption related to the DNC server? Absolutely,” Mulvaney said. “No question about that. But that’s it, and that’s why we held up the money.”

Mulvaney’s comments drew instant attention from Democrats and the establishment media, who took it as a confirmation of a “quid pro quo” exchange with Ukraine in order to get military aid to the country.

In a statement sent to reporters after the briefing, Mulvaney criticized the media for deciding to “misconstrue my comments.”

Let me be clear, there was absolutely no quid pro quo between Ukrainian military aid and any investigation into the 2016 election. The president never told me to withhold any money until the Ukrainians did anything related to the server.

Mulvaney said that the only reason for withholding aid was a lack of military and financial aid from other countries and rooting out corruption from Ukraine.

“There was never any connection between the funds and the Ukrainians doing anything with the server – this was made explicitly obvious by the fact that the aid money was delivered without any action on the part of the Ukrainians regarding the server,” he argued.