For years, astronomers have struggled to understand the source of fast radio bursts, powerful split-second pulses of energy that originate far outside our galaxy. In an astonishing technical feat, astronomers have finally managed to pinpoint the galactic origin of a one-off FRB-but its unexpected location in space suggests scientists need to go back to the drawing board.

New research published today in Science describes the first single FRB to have its location pinpointed to a specific galaxy.

“This is a very significant result,” Shriharsh Tendulkar, an astronomer from McGill University who wasn’t involved with the new study, told Gizmodo. “Firstly, from a technical point of view, it is a very challenging task to find a non-repeating fast radio burst and to precisely measure its position at the same time with the same telescope.”

Indeed, a repeating FRB has been localized to a distant galaxy before, a feat accomplished by a Cornell University-led team in 2017. But FRBs come in two flavors: repeaters and one-offs, the latter of which are more common but, up until this point, were impossible to pinpoint in space owing to their transient nature. A team led by astronomer Keith Bannister from the Commonwealth Science and Industrial Research Organisation (CSIRO) at the Australia Telescope National Facility is now the first to localize the galactic origin of a single, non-repeating FRB.

First detected in 2007, fast radio bursts remain a poorly understood celestial phenomenon. As the name suggests, these pulses are fast, lasting for a few milliseconds; they reside within the radio spectrum; and they’re extremely powerful, originating a long time ago in galaxies far, far away. Astronomers can only guess at the source of FRBs, with prevailing theories involving neutron stars with strong magnetic fields (magnetars), dark matter, black holes, supernovae, and even the activities of extraterrestrial civilizations.

The process of locating fast repeaters is relatively straightforward because they happen at the same point in space. Triangulating the position of a non-repeater with multiple observatories, however, is considerably more difficult, as astronomers can’t predict where the next one might appear. To pinpoint the location of a non-repeater, Bannister’s team developed a new approach that allowed them to freeze and save astronomical data less than a second after the burst was detected. 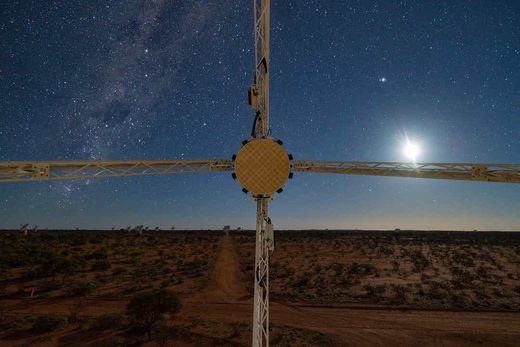 © CSIRO/Alex Cherney
A view from the Australian radio telescope that discovered the new fast radio burst. The Southern Cross is at the left and the moon is at the right.

An important tool that enabled this is CSIRO’s Australian Square Kilometre Array Pathfinder (ASKAP) radio telescope in western Australia, which consists of multiple dish antennas. ASKAP detected the single FRB, named FRB 180924, and the team found that it came from within the outer regions of a galaxy some 3.6 billion light-years away, called DES J214425.25-405400.81. They were able to get its location by taking advantage of the fact that the FRB traveled a slightly different distance to reach each dish antenna, arriving at a slightly different time.

“From these tiny time differences-just a fraction of a billionth of a second-we identified the burst’s home galaxy and even its exact starting point, 13,000 light-years out from the galaxy’s centre in the galactic suburbs,” explained Adam Deller, a co-author of the study and an astronomer at Swinburne University of Technology, in a CSIRO Australia press release.

Bannister described the accomplishment this way: “If we were to stand on the Moon and look down at the Earth with this precision, we would be able to tell not only which city the burst came from, but which postcode-and even which city block.”

The galaxy was then further investigated by the European Southern Observatory’s Very Large Telescope in Chile, and its distance from Earth was measured by the Keck telescope in Hawaii and the Gemini South telescope in Chile. Together, these are the world’s three largest optical telescopes.

“What I think is most remarkable is that for a single, one-off radio pulse, they’ve managed to capture so much in-depth information,” Emily Petroff, an astronomer from the Netherlands Institute for Radio Astronomy who’s not affiliated with the new study, told Gizmodo. “Not only were they able to precisely pinpoint the burst to the galaxy it came from, but they were also able to make a measurement of the magnetic field in the environment around the burst source.”

This achievement is now threatening to overturn pre-existing conceptions of the environments in which FRBs are presumed to exist. As noted, FRB 180924 came from in the outer reaches of its galaxy. The only other localized FRB, the repeater from 2017, originated from a dwarf galaxy in a dense star-forming region. Naturally, astronomers figured this dynamic, turbulent environment contributed to the emergence of FRBs, but FRB 180924 was found in a large galaxy about the size of our Milky Way, and in a region where star formation has practically ground to a halt.

Petroff said these two galaxies “could not be more different,” and that this new result “gives us more questions than answers.” But “at least we know that ASKAP can localize FRBs from one-off pulses, so hopefully we will get answers from more localized bursts soon,” she said.

“The model that astronomers had thought out for the repeating FRB coming from a young magnetar-a strongly magnetized neutron star-simply does not work for this non-repeating FRB,” Tendulkar told Gizmodo. “Finding a young magnetar in the outskirts of a massive galaxy with old stars is like finding a whale in the Sahara. It is very early in the field of course, but this might suggest that repeating and non-repeating FRBs come from completely different origins.”

As Petroff and Tendulkar both pointed out, this result is giving rise to more questions than answers. But that’s good! Astronomers now have more avenues to explore, and though unexpected, these pathways could eventually lead us to the truth.