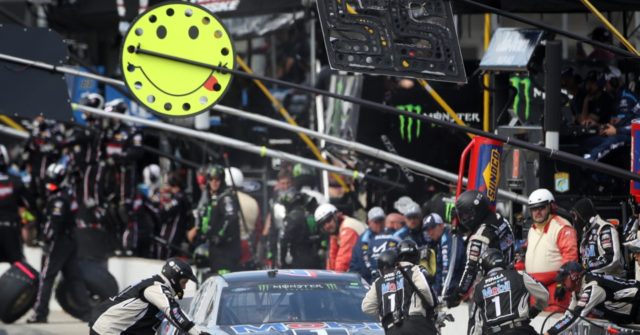 NASCAR admits it is shifting its position on guns and the latest proof can be seen via the rejection of an ad that shows a semiautomatic rifle.

NASCAR is taking a “gradual shift…on guns” and will no longer allow partners to advertise commonly-owned rifles. This pathetic decision will cause their current customers to take a gradual shift on @NASCAR and will alienate potential customers. Good luck! https://t.co/HqRv7kIRci pic.twitter.com/ixBplhX45I

The NRA-ILA reports the rejected ad was from K-Var, and “included depictions of ‘assault-style rifles/sniper rifles.’” NASCAR’s media sales company told K-Var the racing giant is undergoing a “gradual shift in (its) position on guns.”

We just heard from NASCAR on a number of gun related ads and unfortunately, due a gradual shift in NASCAR’s position on guns, these ads must be edited/changed—especially those that are depicted as assault-style rifles/sniper rifles. NASCAR is still open to some of the less controversial gun accessories, concealed carry, or classes.

NASCAR’s changing position on guns follows Dick’s Sporting Good’s February 2018 decision to ban the sell of commonly owned semiautomatic rifles. Moreover, the change in NASCAR advertisement is occurring at exactly the same time as Walmart, Kroger, and Walgreens are banning open carry in their stores.

AWR Hawkins is an award-winning Second Amendment columnist for Breitbart News and the writer/curator of Down Range with AWR Hawkins, a weekly newsletter focused on all things Second Amendment, also for Breitbart News. He is the political analyst for Armed American Radio. Follow him on Twitter: @AWRHawkins. Reach him directly at awrhawkins@breitbart.com. Sign up to get Down Range at breitbart.com/downrange