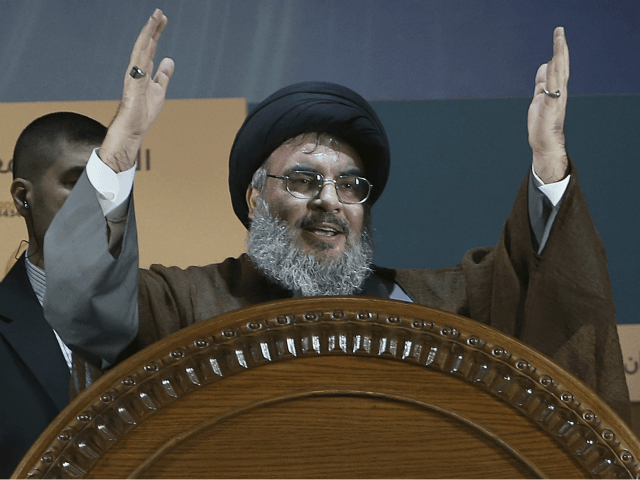 TEL AVIV – Hezbollah terror chief Hassan Nasrallah said Saturday he has decided just how to retaliate over an alleged recent Israeli drone attack that Israel “must pay a price” for.

It is about “establishing the rules of engagement and … the logic of protection for the country,” he said in a televised speech from his Beirut bunker.

His comments came a week after the terror group blamed Israel for a drone attack on a Hezbollah-dominated suburb of Beirut that was said to have caused serious damage to advanced industrial equipment for mixing fuel for long-range missiles, a claim Nasrallah denies.

“We do not have factories to produce precision-guided missiles in Lebanon,” Nasrallah said.

Last week in the early hours of Sunday, two drones flew into the Dahiyeh neighborhood in southern Beirut, a Hezbollah stronghold. Nasrallah said one of the drones, carrying explosives, was brought down by “youths throwing stones” while the other exploded in the air, sparking a fire and causing damage to an adjacent building belonging to the terror group.

Reports of a reprisal emerged in the aftermath, however the terror group made it clear that it did not intend to become embroiled in another war with Israel.

According to the Lebanese Al-Akhbar daily, Nasrallah told other Hezbollah officials last week that “we are in no hurry … let’s leave the Israelis on alert [but] they can sleep comfortably.”

Hezbollah’s eventual response will have the goal of “establishing a new status quo” in which Israel would be blocked from violating Lebanese sovereignty by land, air or sea, the report said.

The Reuters news agency last week cited two sources close to the Iran-backed terror group as saying that it is planning a calculated strike against Israel, but not one that would spark a war.

It “is being arranged in a way which wouldn’t lead to a war that neither Hezbollah nor Israel wants,” one of the sources said. “The direction now is for a calculated strike, but how matters develop, that’s another thing.”

In an interview with Russia’s RT, Hezbollah’s deputy secretary general, Naim Qassem, said that his group’s reprisal would be an “appropriate surprise” to Israel but declined to give further details.

Qassem said that while the Israeli strikes are being taken very seriously by the group, “the atmosphere is one of a response to an attack, not an atmosphere of war.”

“Everything will be decided when the time comes,” he added.

In his speech Saturday, Nasrallah threatened that the response to the drone attack would be launched from Lebanon and could strike anywhere along the border.

Foreign Minister Israel Katz on Sunday morning responded that Israel would “destroy” Lebanon if Nasrallah went ahead with his threat.

“Nasrallah is an Iranian puppet, who has taken upon himself the portfolio of the planned Iranian attack from Syria, which it is doubtful he knew about, and is peddling stories to the Lebanese people about defending Lebanon,” Katz said on Twitter, in a message also posted in Arabic.

“If he continues down this path, he will be remembered as the destroyer of Lebanon,” he added.

“Nasrallah, have mercy on Lebanon and don’t cause the IDF to return it to the stone age. The state of Lebanon will be held responsible for any terror attack committed from its territory,” he tweeted.

The IDF on Saturday postponed a large-scale drill, instead putting troops on alert and sending heavy artillery to the northern border in response to the Hezbollah threat.

“In the past week, IDF troops — including ground, air, naval and intelligence forces — have improved their preparedness for a variety of scenarios in the area of the Northern Command and the Galilee Division,” the army said in a statement.