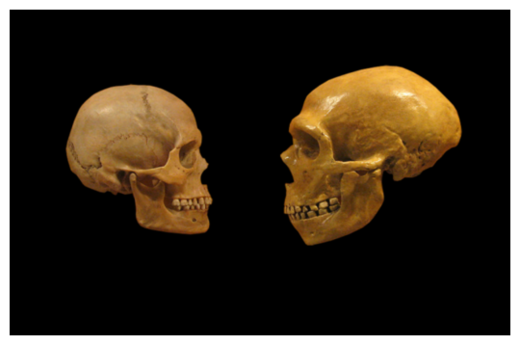 © hairymuseummatt / DrMikeBaxter / via Wikimedia Commons
A modern human and Neanderthal skull face off.

John Capra, a research scientist at Vanderbilt University, wants to know how evolution has shaped our genomes and how differences in genetics can account for differences in species. In his latest work, he tries to get a better sense of what ancient humans — Neanderthals and Denisovans — may have been like. This has been difficult because there is only so much that scientists can glean about biological traits from fossils and DNA. And it’s not much.

Capra’s new study takes advantage of the fact that Neanderthals interbred with modern humans (yes, Jean Auel was a prescient genius). Collectively, we have about a third of the Neanderthal genome scattered across our cells’ nuclei, or at least Eurasian populations do. Most of this Neanderthal DNA is in regions that don’t encode proteins, a category that includes gene regulatory regions that dictate where, when, and how much a gene is expressed.

Much of the Neanderthal DNA that has been retained in the modern genome influences the immune system, hair and skin, and neurological development. But to figure out which genetic regions have divergent regulatory effects in ancient and modern humans, Capra’s lab didn’t look at the Neanderthal DNA sequences that modern humans got. It looked at the sequences we didn’t get.

First, Capra and his colleagues made an algorithm that could estimate how much a given DNA sequence might regulate the activity of nearby genes. They trained it on the PredictDB data repository of genetic variants and gene activity profiles from modern humans. They then generated two lists: those genes that lack an archaic regulator, and those that have one.

To do so, the researchers applied their algorithm to the genome of the Altai Neanderthal, a woman who lived about 122,000 years ago in the Altai Mountains that span the intersection of Russia, China, Mongolia, and Kazakhstan. By comparing the predicted regulatory effects of the Neanderthal regions in the Neanderthal genome with the corresponding modern regions in our genome, the researchers deduced that we have 766 genes that lack archaic regulatory regions and are thus probably regulated differently in us than they were in the Altai Neanderthal.

The genes are present on all 22 of our regular chromosomes and active in all 44 tissues analyzed. Similar (although not identical) results were achieved when the modern genomes were compared to those of two other ancient humans: a Denisovan who lived 72,000 years ago and the Vindija Neanderthal, who lived in Croatia 52,000 years ago.

The set of divergently regulated genes is enriched in those that play roles in a number of important clinical issues, including heart attacks, miscarriage, and certain cancers. Usually, but not always, the Neanderthal sequence increases the risk of these events. Other divergently regulated genes rendered ancient hominins hairier than we are, with different skeletal and dental architecture.

So, Neanderthals were different from us and looked different from us, not necessarily because they had different genes than we do but because our genes are regulated differently. This finding might not be groundbreaking, but it is definitely still cool. And perhaps the methodology will reveal other phenotypic differences that could not be studied with fossils.