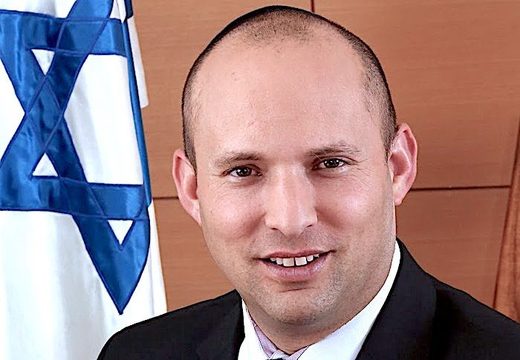 Benjamin Netanyahu surprised an exhausted and apathetic nation by announcing that, come Sunday, he will appoint his longtime foe, Naftali Bennett of (some amoebic rightwing party, they keep changing names), as Defense Minister. Bennett won’t enjoy the office, currently held by Netanyahu, for long: The deal says he will only hold it until a new government is formed. As an aside, Bennett’s (some amoebic rightwing party), with three seats, will be absorbed within Likud until the next elections.

Next elections are likely to be announced within four weeks.

And legal scholars already mentioned that, for arcane reasons, the appointment is likely illegal; but Netanyahu’s zombie government has already crossed so many lines when it comes to the status of provisional governments, the legal system will probably sigh and approve it anyway.

Netanyahu has a long and dirty history of hatred towards Bennett. The latter used to be one of Netanyahu’s senior aides during Ehud Olmert’s government, from 2006 until 2008. They had a spectacular falling out, details of which are not all clear. What is clear is that Netanyahu was paying Bennett (and Ayelet Shaked, his Sancho Panza) black money, out of his own account, without receipts; the prime minister’s wife, Sara, famously prone to tantrums, found out, and a screaming match ensued. Supposedly she blamed Netanyahu for wasting the royal couple’s inheritance on Bennett and Shaked. Bennett would later say that he went a “terror course” under Sara Netanyahu.

This didn’t end there. When Shaked was Justice Minister, she was pointedly refused a place on the PM’s plane, and had to make her own travel arrangements. One of the scandals involving Netanyahu (Case 4000, per the Israeli Attorney General) shows that Netanyahu pressured a media oligarch, Shaul Aluvich, to have his main news site, Walla!, publish dirt on Bennett’s wife, Gilat. Specifically, that Gilat (who is not religious) worked as a chef at a non-kosher restaurant. This was supposed to undercut Bennett’s position as leader of the Jewish Home party. Aluvich also had defamatory (and likely incorrect) information published about Bennett’s father, at Netanyahu’s behest. And just after the April elections, when Bennett and Shaked’s party failed to meet the electoral threshhold, and they were no longer Members of the Knesset, Netanyahu fired them from his outgoing government. Because it’s always better to kick them when they’re down, supposedly.

Given this history of venom and hatred, why did Netanyahu decide to elevate Bennett to the latter’s life-long ambition, the Defense Ministry? Why do so during a provisional government, which is barely legally allowed to wipe its own nose?

Because Benny Gantz still has some two weeks as the presumptive Prime Minister, given the mandate to form a new government by the Israeli president, and Bennett has been cunning enough to meet with him. By so doing, he signaled Netanyahu he just might jump over to Gantz.

I am reliably informed that the IDF will announce its new Flying Pigs Wing before Bennett pulls this Gantz schtick, which would forever ruin him among his base. It is also clear that Gantz has only one way ahead: a minority government, supported by Liberman and the Joint List from outside. Creating such a government would be extremely difficult as it is; adding Bennett and Shaked, notorious Palestinian-haters, to the mix would make an already-unstable mix into an explosive compound.

Bennett had nothing to give Gantz – but he could rattle Netanyahu. That’s the common wisdom, anyway: That Netanyahu is chickenshit enough to fall for Bennett’s trick, enough to give Bennett the Defense Ministry.

For a few weeks anyway. After which, once we go to elections again, Bennett will have to convince the voters he’s actually worth anything. Bennett will not be able to do much, and certainly not change policy in any meaningful way; though he is likely to delay the removal of an illegal outpost here and there. Though the army has done its best to avoid doing so anyway; and Netanyahu has followed that policy for the past year.

There may be a darker element, though. Netanyahu has been speaking of war with Iran time and again recently, going to the point of saying “this isn’t just a Netanyahu spin, it’s real”. He may need a Defense Minister at his side. Preferably, one to back him up when he wants to delay the elections and, if all else fails, to hold the bag when the war goes catastrophically wrong.

About the Author:
Yossi Gurvitz is a journalist and a blogger, and has covered the occupation extensively.