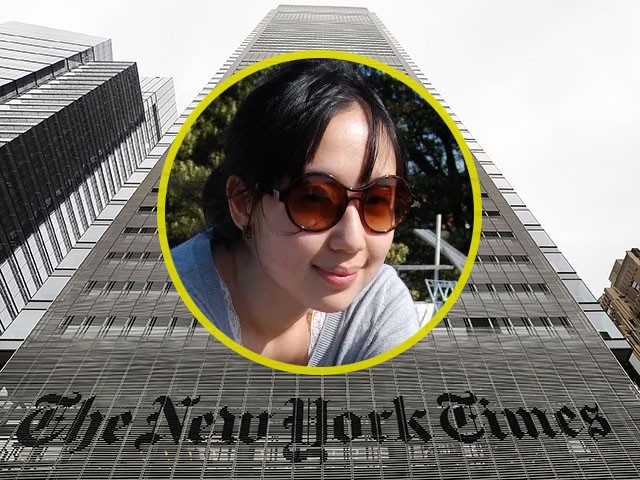 The New York Times is under fire after excusing Sarah Jeong, its newest editorial hire, for numerous anti-white sentiments — exposing the paper’s double standards when it comes to firing new employees over old, controversial tweets.

The New York Times‘ communications department announced on Wednesday that Jeong will be joining the editorial board as part of a “fab group of recent additions” to the paper’s opinions section in September.

In scores of tweets, Jeong — as an epic ironic troll without any underlying bigotry, of course — denigrates whites and compares them to dogs.

In another conversation, Jeong riffed on white people being “only fit to live underground like groveling goblins,” which snowballed into a witty rumination on whites smelling like dogs.

Are white people genetically predisposed to burn faster in the sun, thus logically being only fit to live underground like groveling goblins

we should address the data head-on pic.twitter.com/XoaX7vUP4x

the science is indisputable pic.twitter.com/th39vKR40g

“but i don’t smell like dog when it rains!” you might protest. well you wouldn’t know, would you

@susie_c i mean, there clearly isn’t institutional racism, and in many cases, fear of white people doesn’t quite amount to racism

Jeong wrote in July 2014: “oh man it’s kind of sick how much I get out of being cruel to old white men.”

“#CancelWhitePeople,” she declared in November 2014, midway through a thread mocking fans of NPR’s “Serial” podcast. “That must be really hard for you, having feelings about race,”  she taunted.

Wow today is full of white people having feelings about race

that must be really hard for you, having feelings about race. xoxo have a nice day

The Times and Jeong posted statements Thursday at noon expressing “regret” over her history of biting “satire” — but the paper declared she had passed its “thorough vetting process.”

Our statement in response to criticism of the hiring of Sarah Jeong. pic.twitter.com/WryIgbaoqg

Jeong escaped the fate of previous Times hires who were swiftly fired over old, controversial tweets.

I don’t care about sarah jeong’s dumb old tweets but it’s the Times themselves who set this standard pic.twitter.com/uoa0rRkWaK

She will join the Times after a stint at The Verge, the technology news outlet owned by far-left Vox Media. The 30-year-old is the author of  The Internet of Garbage, which “examines the many forms of online harassment, free speech, and the challenges of moderating platforms and social media networks.” Jeong was born in South Korea and grew up in California and North Carolina. During her time at Harvard Law School, she edited the Journal of Law & Gender. Her work has appeared in The Washington Post, The New York Times Magazine, The Atlantic and Motherboard.

We are proud of the work that @sarahjeong has done at The Verge, which reflects her brilliance and empathy for everyone around her. All of us stand by Sarah; digging for old, out-of-context tweets in bad faith to drum up outrage is bad for the news and society at large. https://t.co/cebnIB3QjG

Man, this @sarahjeong “controversy” is ridiculous. What has made her such an authentic writer over the years is the funny, smart, and original way she has used twitter. To use her clearly tongue-in-cheek tweets to now stifle her voice is so depressing.

For as long as I’ve known her, @sarahjeong has had the same attacks appear whenever she takes a deserved step in her career. It’s ridiculous. She is a very talented journalist and the exact kind of brilliant, savvy person who should be critiquing the powers of big tech.

Obviously this is a bad faith bullshit crusade against @sarahjeong & just another example of a desperate need for reactionary whites to feel victimhood. https://t.co/Dq8XfFB8eJ

This is where Andrew Sullivan is at now – sharing Gateway Pundit posts about Sarah Jeong being The Real Racist pic.twitter.com/BPNBwfba6C

I’m a NYT reader and subscriber, unlike those calling Sarah Jeong a racist. I’m excited she’s joining, her reporting on litigation is top-notch, engaging and accurate.

Don’t screw this up.

Does the NYT know that @sarahjeong has a history of viciously dunking on white people on Twitter? She must be removed as the director of Guardians of the Galaxy 3.

To be clear, she isn’t a racist and pretending otherwise is a disingenuous dog whistle and you should try to troll better.