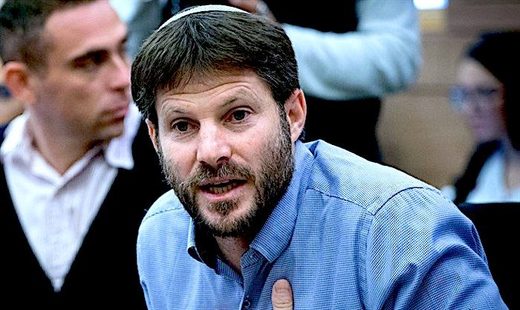 Smotrich made it clear that he does not work for Netnayahu as such, but for God, and for the “people of Israel,” codified Hebrew language for “Jews”:

Smotrich is co-leader of the Union of Right-Wing Parties, the merger which got the Kahanist Jewish Power party elected in April. Subsequently, Netanyahu’s failure to assemble a governing coalition led to a vote to dissolve the Knesset in late May, and new elections are set for September 17th. 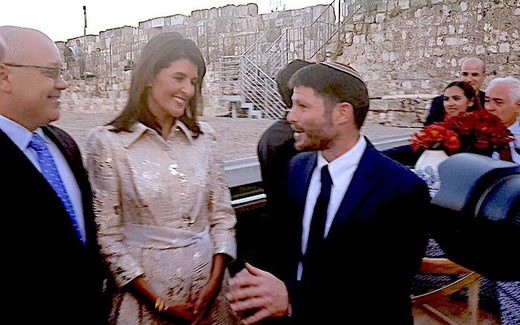 © Unknown
Bezalel Smotrich with Nikki Haley and her husband Mike in Jerusalem, June 27, 2019.

In the meanwhile, Netanyahu has been firing ministers and appointing new ones. When Justice Minister Ayelet Shaked was fired early this month, Smotrich, 39, threw his hat in the ring. His pitch was that Israel should “operate according to the Torah”, as he said in a radio interview:

The State of Israel, the country of the Jewish people, with God willing, will go back to operating as it did in the days of King David and King Solomon… I want the State of Israel to operate according to the Torah in the long run. That’s how it should be, it’s a Jewish state.

It was widely thought that those statements were enough to lose Smotrich the opportunity of becoming Justice Minister, something he’d been vying for in the elections. Since the failure to create a government was largely due to a spat between Netanayhu and Avigdor Lieberman concerning draft of ultra-orthodox Jews – Lieberman is an avowed secularist, demanding tougher draft measures – such biblical advocacies would only have added petrol to the fire.

So Netanyahu appointed Likud’s Amir Ohana for Justice Minister. Ohana is a loyalist, one of the only senior members of Likud to have publicly backed Netanyahu’s drive to secure immunity from prosecution in the corruption cases against him, so his placing is strategic.

But Smotrich had to get a ministerial spot, at least for the while until a new government is formed. Thus he got the Transportation Ministry, replacing Israel Katz, who had been named the Foreign Minister before the election.

Smotrich’s partner in leading the URWP is Rafi Peretz, who got the Education Ministry instead of Naftali Bennett who was fired simultaneously with Ayelet Shaked. Peretz was vying for this ministry anyway. Peretz appears to be a slightly cooler character than Smotrich, but let that not deceive you. He is a major supporter of the Yeshiva and religious military prep-school in the illegal settlement of Eli, where the rabbis were secretly caught on tape praising Hitler. When a leading rabbi there, Yigal Levinstein, called gays “perverts” in 2016, Peretz was a supporter. As Smotrich did the next year when Levinstein said that female soldiers were not Jewish and that the army has “driven our girls crazy.” Smotrich fought for his right to free speech. Defense Minister Lieberman condemned the remarks, suggesting the resignation of the rabbi, and Smotrich responded: “There is no chance that he can carry out his threat. Enough of this silencing.”

Smotrich is himself openly homophobic, and has also supported segregation between Jewish and Palestinian citizens in maternity wards. Back in 2016, when the practice was widely exposed, he tweeted:

It is natural that my wife would not want to lay down next to someone who just gave birth to a baby who might want to murder her baby in another 20 years.

In 2017, Smotrich announced his “Decision Plan“, laying out a way for Israel to annex Palestinian territory, officially so, and to coerce the population to either live under apartheid, explicitly relinquishing “national aspirations”, or be expelled.

Of course this is not very different from Danny Danon, Israel’s UN Ambassador, in his recent piece in the New York Times, calling upon Palestinians to “surrender” and commit “national suicide”. Smotrich is perhaps a touch more explicit, but let’s not fight over these shades of gray.

Smotrich may not be Justice Minister, yet. But he is now a cabinet minister, and his power is growing. He is a relatively young politician, who seems to have a sense for survival, and a huge ambition. He is of the religious-nationalist generation which is replacing the old guard. And yes, he works for God.

About the Author:
Jonathan Ofir is an Israeli musician, conductor and blogger/writer based in Denmark.