David E Martin until recently was best known as the founder of M·CAM®, the international leader in innovation finance, trade, and intangible asset finance.  He has also served as an advisor to numerous Central Banks, global economic forums, the World Bank and International Finance Corporation and national governments around the world.

Guest on the Plandemic: Indoctornation documentary

He has become an important voice as part of informed discourse around Coronavirus and our response as a society, with his recent research continuing to focus on vaccines, patents and the role of companies such as Moderna.

He is also a Developer of Liguinguistic Genomics – which was the first platform on which you could determine the intent of communication rather than literal artifact of communication we have also used that technology for a number of other applications in defence, intelligence and finance and most notably in the early 2,000s his company was responsible for bringing down what was at the time one of the largest tax frauds in US history.

We maintained a series of enquiries into every individual, every organisations and every company that is involved in anything that either blurs the line of biological and chemical weapons or crosses the line in any of 168 countries.

In 1999 there were a million patents digitised by IBM and those million patents were the first time that innovation had been put into an electronic digital searchable format.  We took that information and we did a very simple exercise using our linguistic genomic technology.

“I made the horrific assessment that approximately one-third of all patents filed in the United States were functional forgeries.”

Meaning that while they had linguistic variations they actually covered the same subject matter.  In 1999 patents on coronavirus started showing up and thus began the rabbit trail.

In March 2003 panic grips Hong Kong as a deadly new virus sweeps through the City.     The Centre for Disease Control saw the possibility of a “gold strike” and that was the coronavirus outbreak that happened in Asia they saw that a virus that they knew could be easily manipulated was something that was very valuable and they sought to patent it and they made sure that they controlled the proprietory rights to the disease to the virus and to its detection and all of the measurement of it.  https://www.nbcnews.com/id/wbna3076748

We know that Anthony Fauci and Ralph Baric at the Centre of Disease Control and a laundry list of people who wanted to take credit for inventing coronavirus were at the hub of this story.

From 2003-2018 they controlled 100% of the cashflow that built the empire around the industrial complex of coronavirus.

We know that the coronavirus manipulation started with Dr Ralph Baric in 1999.  Ralph Baric is the researcher at the University of North Carolina At Chapel Hill who is famous for his chimeric coronavirus research.

In 2002 the coronavirus was seen as an exploitable mechanism for both good and ill.

On April 25 2003  the US Centers for Disease Control filed a patent on the coronavirus transmitted to humans.  Under 35 U.S.C. code section 101 Nature is prohibited from being patented.

“If it was manufactured it was a violation of biological chemical weapons treaties and laws.

If it was natural filing a patent on it was illegal.   In either outcome both are illegal.” 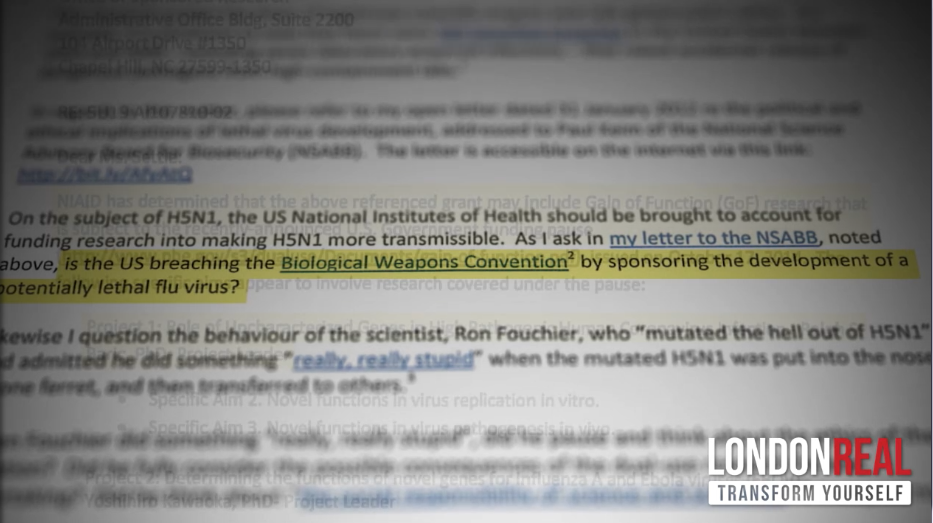 In Spring 2007 the CDC filed a petition with the patent office to keep their application confidential and private they actually filed patents not only on the virus but they also filed patents on its detection and a kit to measure it.  Because of that CDC patent they had the ability to control who was authorised and who was not authorised to make independent enquiries into coronavirus.

You cannot look at the virus, you cannot measure it you cannot develop a test kit for it and by ultimately receiving the patents that constrained anyone from using it, they had the means, they had the motive and most of all they had the monetary gain from turning coronavirus from a pathogen to profit.

And so somewhere between 2012-2013 something happened – the federal funding for research that was feeding into places like Harvard, Emery, University of North Carolina At Chapel Hill that funding suddenly became impaired by something that happened at the NIH where the NIH got this little moment of clarity and said I think something we are doing is wrong and in 2013 the NIH said gain-of-function research on coronavirus should be suspended. 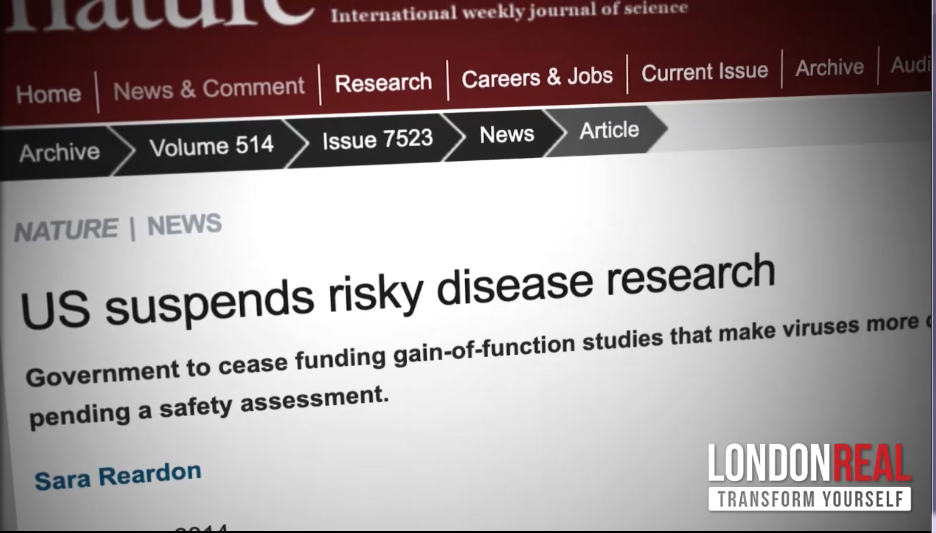 The National Institutes of Health had a moral, social and potentially legal reason to object to research but the letters that were sent to the researchers essentially said “you are receiving notice that we are telling you to stop” – but when you look at the bottom of the notice it basically says keep on going….

But when the heat gets hot in 2014/2015 what do you do – you offshore the research – you fund the Wuhan Institute of Virology to do the stuff that sounds like it is getting a little edgy with respect to its legality and morality – but do you do it straight away – no you run the money through a series of cover organisations to make it look as like you are funding a US operation which then sub-contracts the Wuhan Institute of Virology.  The US could say China did it, China could say the US did it and the cool thing is that both of them are almost telling the truth.

If these claims are correct, and it is not beyond the realms of possibility, if presented and evidenced in a Court of Law this would be truly explosive and have far-reaching ramifications.

Will this testimony be brought to light in the US Supreme Court alongside the case of electoral fraud and corruption?

Will Crimes Against Humanity finally be exposed?

Only time will tell – watch this space.