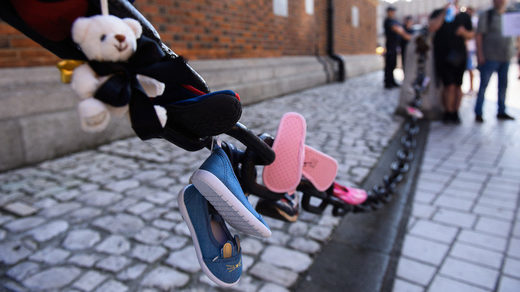 The brains of pedophiles are hardwired from the womb and nothing can change them, according to a study by a prominent doctor. Will this research serve to give child sex predators more rights than their victims?

Dr. James Cantor, a neuroscientist at the Centre for Addiction and Mental Health (CAMH), has triggered controversy with a recent interview in which he argues, based on MRI brain scans of convicted child molesters, that “pedophilia begins in the womb.” Strangely, however, no brains of infants or children were examined in the study.

At one point in the interview, it seemed that Cantor was being too kind to “positive pedophiles,” as he politely refers to those individuals who refrain from acting upon their unspeakable impulses. Cantor argues there is a difference between a so-called ‘positive pedophile’ who has committed no crime, and a sexual predator who has violated a child.

That comment seems fair enough. So long as the sexual deviant is able to control his unnatural urges and not harm anyone, while seeking out professional help, there is no reason to vilify that person. No crime has been committed. Nevertheless, I can’t help but wonder if Cantor’s use of the term “sexual interest pattern” is just another way of saying ‘sexual orientation’? Some fear that is where this discussion on pedophilia and its alleged beginnings in the womb is heading.

There has been an active campaign going on for years, and not least of all in academia, to categorize pedophilia NOT as some kind of sexual deviancy worthy of society’s harshest opprobrium, but rather a ‘sexual orientation.’ In other words, in the very same ballpark as the LGBTQS crowd (I’ve taken the liberty of adding an ‘S’ for ‘Straight’ since this group tends to get sidelined these days). This appears to be just more identity politics, where sexual predators – the purported ‘victims of nature’ – are entitled not only to a special ranking in the camp of sexual orientations, but to our sympathy as well. The mainstream media has also been actively pursuing this line of thought.

Back in 2013, Dr. Cantor was featured in an article where one of his former colleagues at CAMH, Dr. Michael Seto, answered the question proposed in the headline (‘Is pedophilia a sexual orientation?’) when he was quoted in a study as saying: “Pedophiles will remain hidden if they continue to be hated and feared, which would impede efforts to better understand this sexual orientation and thereby prevent child sexual exploitation.”

It is very difficult to understand how slapping a ‘sexual orientation’ label on pedophilia will do anything to protect the real victims, who are, of course, the vulnerable children. In fact, it seems the new designation will only increase their chances of being victimized since the predators may feel that they have license to act according to their newfound status in the LGBTQS club.

Furthermore, it seems odd that Seto wants to blame the public at large for their ‘hate and fear’ of pedophiles, which forces the latter to “remain hidden.” There is, of course, a very good reason for people to feel threatened by such individuals, some of whom are determined to inflict harm upon children. These negative feelings are nothing more fundamental than the human ‘survival instinct.’ Finally, why has so much of the conversation on pedophilia these days switched from the abused to the abuser? What about the rights of the children who are at constant risk of being accosted by these mentally deranged individuals?

While Cantor has refrained from using the term “sexual orientation,” in one particular tweet he did not refute the idea when given the chance that pedophiles might eventually be counted among the LBGTQS crowd.

When a Twitter user exclaimed that “No P [as in ‘pedophile’] should not be part of LGBT because it is a category that is *inherently* abusive. P is a mental illness, not a gender,” Cantor did not agree or disagree with the assertion, but only corrected the person, reminding him that “being a gender is not what puts something in the list.” This forces one to ask if being a ‘born’ pedophile will assure future membership.

Although Cantor’s research has been known for years, America’s current cultural climate, steeped as it is in over-the-top political correctness, has given it renewed life. In fact, it seems possible that the ‘progressive’ social justice warriors, who have a talent for finding an injustice everywhere – from a Civil War monument in the town square and the ‘patriarchy’ to the men’s bathroom – will one day be tempted to fight for the ‘rights’ of the pedophile.

As recent experience has taught us, the radical left has been known to act extremely irrational when confronted with the question of victimhood. And now with researchers claiming that pedophilia begins in the womb and that there is no effective treatment for this condition, it seems just a matter of time before convicted pedophiles demand full equality before the law. The way things are going, it would be premature and even foolish to say they will not succeed.

At this point, it should be remembered that the average American is being inundated by a massive wave of conflicting messages when it comes to the subject of pedophilia. And the media, as to be expected, is only aggravating the situation. Currently, Americans are trying to digest the news about the late sexual deviant Jeffrey Epstein and his private ‘Pedo Island,’ where hundreds of wealthy elites would gather to frolic among an entourage of underage girls. Coming just months after the torch-carrying #MeToo inquisition, the United States looked as if it really needed to check itself into 12-step sex-addiction rehabilitation.

Meanwhile, on the other side of this carnal carnival, the media continues to bombard its captive viewers with an opposing message that says sex and minors go together as naturally as apple pie and Chevrolet. Just ask ‘Desmond is Amazing.’ At the precocious age of 12, this boy from New York is the feature attraction at gay pride parades and strip clubs nationwide. Many people view this salacious exhibitionism as nothing less than pedophilia. Is this the future fate of America where very young boys and girls – far below the age of sexual consent, not to mention puberty – are able to participate in these spectacles? At least one media outlet thinks so.

“Desmond Is Amazing is the future and we’re here for it,” declared Mashable, unable to steer its misguided subjectivity like responsible journalists. Judging by the devastating public fallout that accompanied the tweet, however, it is obvious that the public has no stomach for such libidinous behavior from its youth.

Meanwhile, hyper-sexualization continues to run amok inside of the US public school system to the point that even preschoolers, too young to tie up their shoelaces, are being subjected to smut talk. The educators who teach the lessons occasionally dress in drag, while the textbooks are risqué enough to make a grown adult blush. Is it any wonder, then, that very young children are expressing doubts over their gender, proclaiming that they are the opposite sex?

Amid these two radically different messages it is increasingly difficult to say whether pedophilia is really taboo in the US or becoming more socially acceptable. Now, with Cantor’s study declaring pedophilia as rooted in some kind of genetic trait, the kiddy pool is really muddied.

The results of the study, which may or may not aggravate the situation with regards to pedophilia, demand to be more heavily scrutinized by other members of the scientific community.

While it is true that not all pedophiles act upon their sexual urges, the fact remains that many do. Therefore we owe it to the safety of children to ensure that more resources are devoted to examining this mental problem and that pedophiles get the medical treatment they need and deserve in order to lead normal lives.

Dr. James Cantor did not respond to requests to provide his comments on this story.

Robert Bridge is an American writer and journalist. Former Editor-in-Chief of The Moscow News, he is author of the book, Midnight in the American Empire, released in 2013.