The following has just been published on Order Order:

When SAGE’s Scientific Pandemic Insights Group on Behaviours at the start of the pandemic recommended the government deliberately use psychological-operations techniques to change behaviour, the use of the media and advertising was advised to “increase the personal sense of threat”. SAGE thought this would be highly effective, though warned there “could be negative spill-over effects”. New survey data shows that negative spill-over effects have happened and have had a dramatic effect on the nation’s mental health.

“As long ago as last summer, the leading mental health charity MIND was warning the Government of a mental health pandemic. Independent polling for Recovery at the start of the year revealed that most adults in the UK are now worried about the mental health of someone close to them. Yet the Government responded by launching its most frightening campaign yet with its terrifying ‘look into her eyes’ message … Experts warn that the use of fear to control behaviour is dangerous and unethical, especially when combined with curbs of freedom of speech. If such scaremongering was ever justified, how can it be right now, when the evidence of the horrific damage it is doing is so clear and the threat from Covid-19 has been controlled by a successful vaccination programme? Yet the fear continues. Only this week, Boris Johnson warned of a ‘third wave’ like Europe even though half of our adults are vaccinated. It’s time to treat the public like adults, restore freedom of speech, and stop creating fear.” 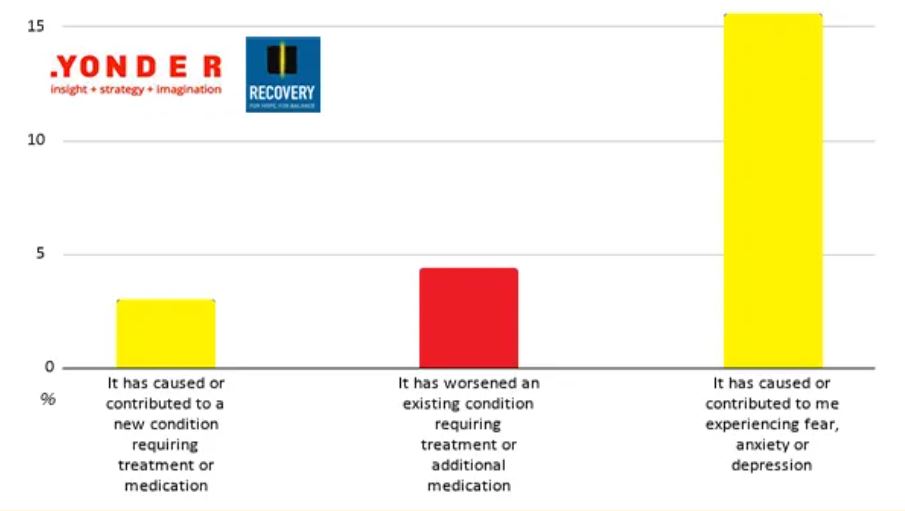 Nationally over 12 million people’s mental health has been damaged by an unprecedented Government advertising campaign specifically designed to create fear. Drilling down the polling shows that the impact has been most severe on younger people and those aged under 40. The Recovery Campaign group has long warned of the dangers to mental health from the prolonged use of fear to control behaviour. A practice that is widely regarded by many psychologists and mental health experts as unethical. With the majority of adults vaccinated the negative-spillover effects on mental health now arguably outweigh the public health benefits…

* Yonder asked a representative sample of 1000 respondents drawn from an Omnibus panel of 200,000 UK adults the question, ‘What impact, if any, has Government advertising such as this had on your mental health over the past year’, showing an example from the Government’s recent ‘look into her eyes’ campaign.

One of the most instrumental members of the Sage behavioural team is Professor Susan Michie who is a multi-millionaire proudly out Communist.

Michie is Professor of Health Psychology and Director of the Centre for Behaviour Change at UCL, so prima facie she has the credentials to be a scientific advisor. What is never mentioned at any point to give context to her many media appearances, in which she usually launches a tirade at the government, is that she has for 40 years been a member of of the Communist Party of Britain.

All this has not precluded her from using family wealth to financially support the Labour Party under the Corbyn leadership. In March 2018, it was Michie who said that the Communist Party would no longer stand against Labour in general elections and she should be “working full tilt” for the election of Corbyn as PM. Hardly surprising given her daughter was appointed under him to Labour HQ and her ex-husband was Corbyn’s close adviser.

Lead Correspondent | David Clews is the Lead Correspondent for UNN, with over 15 years of political experience and a wealth of social media and communication skills David gets to the heart of what is really important to the real people of the UK.

@peepso_user_2376(Spear Thrower)
This just confirms they knew what they were doing and did it anyway, just like the conspiracy theorists said it would. All part of the plan
1 month ago 1 month ago