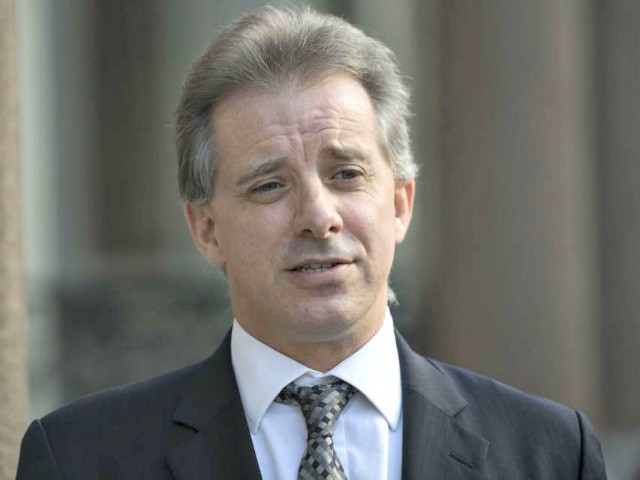 Christopher Steele, the ex-British spy hired by Fusion GPS to conduct opposition research against candidate Donald Trump, distributed his unverified “pee dossier” to the top levels of British intelligence months before Trump ever became aware of it, according to a report by a British newspaper.

The report by the Telegraph comes ahead of the soon-expected conclusion of a Justice Department inspector general investigation into how the FBI conducted its investigation into the Trump campaign in 2016, and comes as the Justice Department begins to examine how the investigation started in the first place. Steele was hired around June 2016 by Fusion GPS, who was contracted by the law firm Perkins Coie on behalf of Hillary Clinton’s campaign and the Democratic National Committee (DNC). He produced a 35-page dossier that alleged that the Trump campaign was colluding with Russia to win the election. It also alleged Trump in 2013 paid Russian prostitutes to urinate on a bed during a visit to Moscow for the Miss Universe pageant.

Special counsel Robert Mueller would later find there was no evidence of criminal collusion, conspiracy, or coordination by anyone associated with the Trump campaign.

But according to the Telegraph’s report, Steele decided after Trump won that “it was time” for British intelligence to be aware of his findings, which alleged that the Trump campaign was colluding with Russia on the 2016 elections.

Steele reportedly approached Sir Charles Farr, then the chair of the Joint Intelligence Committee (JIC), which is the body in charge of assessing secret information. Steele had known Farr for 20 years, according to the report.

Steele and Farr met at Farr’s house in Wimbledon, South London, a week after Trump’s election and “painstakingly went through the intelligence line by line.” They met a second time, ten days later, to talk further and discuss “new memos” on the same subject.

Farr was reportedly close to Prime Minister Theresa May from his time as director-general at the Home Office’s Office for Security and Counter Terrorism, where May was home secretary at the time.

Farr then “rapidly” passed Steele’s dossier up the chain of command, according to “well-placed sources.” A source told the Telegraph that Andrew Parker, the MI5 director general, and Alex Younger, the MI6 chief, were briefed on the dossier. The dossier was “marked up to the top,” but British officials deny that May was ever briefed on the dossier.

May flew to Washington, DC, days after Trump’s inauguration and became the first world leader hosted in the White House. During that visit, she invited Trump to visit the U.K. on behalf of the queen. Trump is scheduled to visit the U.K. early next month, from June 3 to 5.

Farr died this February of cancer, according to the Telegraph.

The report does not explain why Steele allegedly waited until after Trump’s election to pass it on to British intelligence, or whether he or anyone else had passed it to other British officials before the election.

Before the election, Fusion GPS and Steele had distributed the dossier to the FBI, the Justice Department, the State Department, members of Congress, and members of the media. The FBI used Steele’s dossier to obtain a surveillance warrant on former Trump campaign adviser Carter Page in October 2016.

After the election, an associate of Steele also informed the late Sen. John McCain (R-AZ) of the dossier at a conference in Halifax, Nova Scotia. He and McCain arranged for one of McCain’s associates to be briefed on the dossier and get a copy. The associate later showed a reporter from BuzzFeed the dossier.

Shortly after Trump himself was briefed by then-FBI Director James Comey on the existence of the dossier on January 6, 2017, CNN reported that Trump was briefed on the dossier, and BuzzFeed subsequently published the dossier in full.
Steele has largely disappeared from public after his role with the dossier and the FBI’s investigation into the Trump campaign was revealed, although reports in the British and American media have occasionally emerged that are sympathetic to him.

The British government’s involvement, if any, in the FBI’s investigation into the Trump campaign is not yet known.

The FBI claims it began its investigation after former Trump campaign adviser George Papadopoulos, who lived in London, met with an Australian diplomat named Alexander Downer at a bar, and Papadopoulos told him that the Russians had dirt on Clinton. Downer allegedly told Australian officials, who then allegedly told U.S. officials after DNC emails were published online on July 22, 2016.

Papadopoulos has said in interviews with Breitbart News and other outlets that a woman, who had previously worked for the FBI in London, had introduced him to a Maltese academic named Joseph Mifsud. Papadopoulos has since said that Mifsud is the one who said that the Russians had thousands of emails embarrassing to Clinton.

At that time, it was already publicly known that Clinton had maintained a private server in her New York home basement, and that tens of thousands of emails had gone missing.

Separately, the FBI had an informant named Stefan Halper in London who had met Page, another then-Trump campaign adviser. Page was invited to attend a conference that Halper was also attending, and the two met at the conference in mid-July, before the FBI claims it received the tip from the Australians after July 22, 2016.

Halper would also reach out to Papadopoulos, offering to pay him $3,000 for a research paper on energy and introducing him to an attractive young woman, who claimed to be his assistant. The New York Times recently reported that woman was actually a government investigator the FBI sent to oversee the surveillance operations into Papadopoulos.

Trump has previously tweeted allegations that the United Kingdom was spying on him:

“Former CIA analyst Larry Johnson accuses United Kingdom Intelligence of helping Obama Administration Spy on the 2016 Trump Presidential Campaign.” @OANN WOW! It is now just a question of time before the truth comes out, and when it does, it will be a beauty!