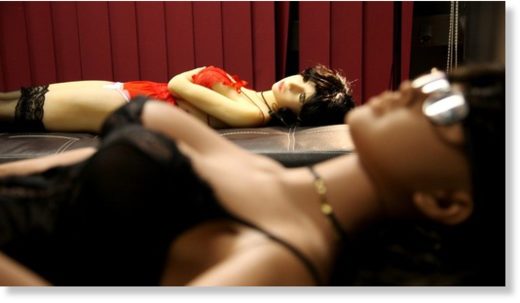 At half the cost of their human counterparts, sex worker robots at a Swiss brothel are becoming the choice of hard-up punters. One expert claims sex with a robo-doll is a fetish among men, just like a preference for leather.

The beautiful and civilized Swiss city of Lucerne is renowned for its setting below snow-capped mountain peaks on the banks of Lake Lucerne, with its medieval architecture, picturesque Altstadt (Old Town) and brothel full of sex robots instead of real prostitutes.

That’s right, the nation that brought us cuckoo clocks and Toblerone chocolate has gone hi-tech in the sex industry with Lucerne brothel, Arsenal 51 (I don’t know either), introducing 90 Swiss francs ($90) an hour sessions with their sort-of real-looking love mannequins for those punters who fancy a little less conversation, a little more action, as Elvis would put it.

They’re half the price of genuine human female company and proving popular among the sophisticated demographic that frequents such houses of pleasure.You can meet Zoe, Mimi (pictured online looking like a partly-dressed giant Barbie) or Nina (think plastic Britney Spears wearing a military cap) for 30 minutes of familiarisation for 60 Swiss francs.

Of course, for those not prepared to go totally virtual, a combination of a real woman and a ‘Sexpuppe’ for half an hour at 150 Swiss francs is also available. How the client divides the time is up to them.

The Arsenal 51 website excitedly exclaims: “Free drinks of course! Like a Jack (Daniels) or Martini!” It doesn’t say whether the drinks are compulsory.

It does however offer the customer reassurance that “all our girls take a shower before they go to your room.” With smart phones and Apple watches only recently offering water resistance, there is no mention how the recharging sockets on the sex robots are kept watertight while they rinse off the soap.

If there is a malfunction, then there should be no concerns about lost time, as the management at Arsenal 51 assure their esteemed clients that they won’t lose a minute’s pleasure because the billing clock only starts once all parties are showered, dried and ready for some robo-romance. If only the dolls could talk, what tales they would tell.

With prostitution legal in Switzerland they have seemingly now got to the point where sex between two consenting adults is, yawn, a little humdrum. And all this time we’ve been thinking the Swiss were boring!

A survey by men’s health organization ‘Praeventionsangebot fuer Freier Don Juan’ of 9,000 men claimed that sex with a robot was a simple fetish of some men, like a preference for leather, according to spokesman Felix Neuenschwander.

No mention if it’s the same guys who still live at home with their parents while aged in their forties, love comic books, and blush furiously and have to leave the room when a tampon advert comes on television.

Who knows? This could be a massive growth industry. While the world’s first sex doll brothel opened in Barcelona in 2017 to last only a month, the market has rebooted to the extent that the Lumidolls franchise, featuring the rubber rather than real variety of woman, now has bordellos in Moscow, Nagoya and Turin.

For those Brits who feel they might be missing out on something, good news arrived for them this week in the shape of a UK-made transgender sex doll with a detachable penis, retailing at just £1,300 ($1,660), and called ‘Alondra’.

The doll was created, says a spokeswoman with a straight face, “because we have listened to popular demand and delivered a transsexual doll onto the market.”

The sound you hear is the last gasp of romance as it is finally pronounced dead.