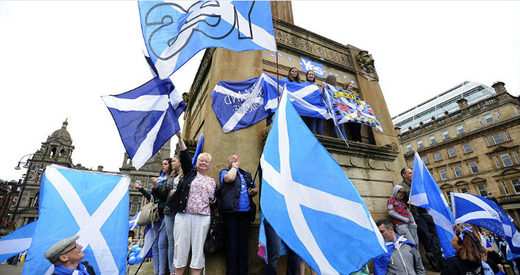 ‘The most important election of our lifetimes’ said Scotland’s leader Nicola Sturgeon about the upcoming UK general election as she launched the Scottish National Party’s campaign last Friday. The message from Sturgeon was to vote SNP to avoid Brexit, saying that her party alone would protect Scottish interests and work to ensure that the country is not taken out of the EU against its will. She warned that the withdrawal agreement secured by Boris Johnson last month was in fact inadequate as it only covers the terms of leaving the EU but says nothing about Britain’s future relationship with Europe. Forecasting ‘many years of wrangling ahead’ she said Johnson was still intent on a No Deal Brexit which was still a likely outcome of negotiations in a year’s time.

The importance of this election is also being reflected in the rhetoric of politicians at present, with Nicola Sturgeon not hesitating to brand Conservative politicians as ‘hard-line Brexit ultras’, evoking images of far-right thugs. She also attacked Labour and the Liberal Democrats by suggesting that Scotland would never be a priority for either party. The Liberal Democrats for their part do pose a threat to the Nationalists with their Remain platform and Nicola Sturgeon was out canvassing in leader Jo Swinson’s constituency at the weekend in a bid to try to unseat her. Jo Swinson, whose party supports the Union, has continued to hit back at the SNP for their ‘obsession with independence.’

The most important take-away from Sturgeon’s speech was however her proposition that the SNP could feasibly do a deal with Labour to ‘lock Boris Johnson out of parliament’ if December’s election resulted in a hung parliament. But in return for this she would expect Jeremy Corbyn to agree to another referendum on Scottish independence in 2020. And there’s no indication yet that he would do so. Labour is a Unionist party, and Scottish Labour leader Richard Leonard asserted on Sunday: ‘There will be no independence referendum in Scotland for years. Scotland won’t want one if we win an election.’

Indeed not everyone is convinced that the SNP will take Scotland on the right path. Brian Wilson, a former Labour politician argues that Sturgeon will be ‘demonising a million Scots‘ who voted to Leave the EU in the Brexit referendum if she continues to oppose Brexit. Arguably, 38 percent of Scots did vote to Leave in 2016, amongst whom there were undoubtedly SNP voters. However Sturgeon will continue to insist that she has the mandate of the Scottish people in pursuing her agenda to keep Scotland in the European Union.

The SNP are a force to be reckoned with in Scotland. They have been in government since 2007 and although they are currently ruling as a minority government in the Scottish parliament, they now hold 35 MPs at Westminster, more than a third of the overall number representing Scotland. Even voters not supportive of independence continue to vote SNP for their policies. In many ways their proposals of greater equality, ending austerity and creating a national living wage somewhat overlap with Labour policies in a country which traditionally has socialist leanings. This together with a popular anti-Brexit stance and talk of ending Scotland’s nuclear capability by shutting down the Trident nuclear base all makes them popular with voters who may otherwise have voted Labour, Liberal Democrat or Green.

Ironically Sturgeon has not had to make much effort to paint the Conservatives in a negative light; they have accomplished this themselves in the last few years. Boris Johnson himself is extremely unpopular north of the border – as a former Etonian he is seen to represent an arrogant elite detached from the concerns of the ordinary Scottish working population. He only confirmed this view when up visiting Scotland in the summer – when he avoided locals by exiting the First Minister’s residence via the back door, thereby earning the name of ‘backdoor Boris’. But even prior to his time in office, under May’s government it was clear that the concerns of Scotland were not to be reflected in any EU withdrawal agreement. As Sturgeon emphasised in her speech on Friday: England voted to leave and will leave, Wales voted to leave and will leave, Northern Ireland will get a special deal, but there is nothing for Scotland, the one country that didn’t want to leave the EU.

Polls have indicated that support for Scottish independence is greater than ever – now at 50 percent. Brexit has played a crucial role in this and will continue to do so. But Scottish independence will throw up its own set of problems, and it’s not clear yet whether, in the midst of all this Brexit uncertainty, Scotland is ready to take on its own set of challenges which becoming independent would undoubtedly create…