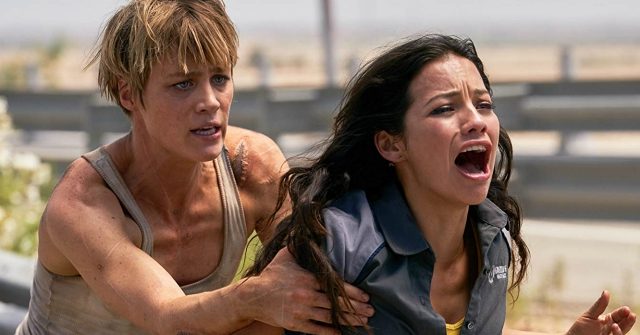 Stop me when anything about director Tim Miller’s Terminator: Dark Fate starts to smell familiar…

Two Terminators travel back in time to the present day. A virtually unstoppable Liquid Terminator is sent back to kill a young person who will someday be vital to the future of mankind in the war against the  machines. The second is a Protector, nowhere near as strong as the Liquid Terminator, and its mission is to protect that young person from the Liquid Terminator. A sinewy, cynical, battle-hardened Sarah Connor (Linda Hamilton) is the mother figure/leader. During the 100 minute chase that follows, the Protector Terminator and the young person bond. The action-packed climax takes place in an industrial center.

Is that not also the story for Terminator 2: Judgment Day (1991)? Why, yes — yes it is. One small difference is that Dark Fate does add a third Terminator, Arnold Schwarzenegger’s T-800 (no, not that one or the other one; a different one), which got stuck in the past after completing its 1991 mission.

What is entirely different, though, what is sorely missing from Dark Fate, is an overall sense of purpose, a reason for being — not to mention a sense of momentum and peril, the idea that these characters are never really safe. No suspense. No dread. The story is designed to hang action scenes on, and not much more.

James Cameron’s Terminator (1984), a game-changer in the action genre (even though it didn’t become a hit until we all discovered it on home video), ends with Sarah Connor safe, pregnant with future-resistance leader John Connor, and in full doomsday-prep mode for August 29, 1997 — Judgment Day, the day Skynet becomes self-aware and launches a devastating nuclear attack.

Cameron’s follow-up, the near-perfect Terminator 2 (1991), is just as necessary because this one is about something bigger than its predecessor, which was about preserving the future in the form of John Connor. T2 is about changing the future, about stopping Judgment Day, and having Sarah Connor driven near-mad by her knowledge of the coming apocalypse is genius, a brilliant way to flip the concept on its ear and give Hamilton the opportunity to turn The Girl into a mythical heroine.

Spoiler alert: Judgment Day is stopped in T2, which unfortunately means that everything that comes after — and so much has — is totally contrived.

Yay, but how do we keep milking the cash cow?

This approach is nuts, and it not only negates everything that came before, it is such a massive cheat the stakes seem foolish. We now know that even if our heroes succeed, it won’t matter — Judgment Day will be back.

After three box office disappointments in a row without Cameron, Dark Fate brought him back as a producer and to work on the story. And all we get is a contrived remake of T2 with more girls… And this mostly works. Except for a couple lines of thuddingly-woke dialogue, you don’t give it much thought.

Anyway, Dark Fate does try to fix the mistakes of its three predecessors and the TV show. For starters, we’re not given the date of this all-new Judgment Day (though it can’t be far away), and the last three Terminator chapters (and the TV show) are wiped out, disappeared, which means Dark Fate is a direct sequel to T2.

What cannot be fixed, though, is that Dark Fate makes T1 and T2 pointless; what they can’t fix is the ridiculous contrivance (I won’t spoil it) to bring back another Judgment Day, and one that looks exactly like the original, down to the design of the machines.

Without spoiling too much, nothing about Dark Fate is more absurd than our new resistance leader, who is about four-and-a-half feet tall, and who has less of a leadership presence than Beto O’Rourke. If you’re going to go all woke and cater to diversity for the sake of diversity, at least find someone believable in that role, as opposed to a member of the Lollipop Guild.

Another missing factor is believable relationships. The parental warmth that developed between Schwarzenegger’s Protector Terminator and young John Connor (Edward Furlong) in T2, was effortless. People forget that outside of the incredible action, it was Cameron’s unabashed humanism (which disappeared in Avatar)  that lifted T1 and T2 into something special and memorable.

Mackenzie Davis is Dark Fate’s protector to Natalie Reyes’ Dani, and their lack of chemistry makes it impossible to care about the coming pathos. Gabriel Luna, however, is quite effective as the merciless Rev-9, a Liquid Terminator even more advanced than the one we saw in T2 — though I never really understood how it could squeeze outs its endo-skeleton without weakening.

Yes, it is good to see Linda Hamilton again, and while she’s given top billing, it’s unfortunate the story is not really about her. Even though she looks every day of her 63 years (thank God she didn’t mess with her iconic face), she looks fantastic, her movie star presence has only grown with time, and I could listen to that unfiltered-Lucky Strike voice forever.

Instead of remaking T2, Dark Fate should have gone the Logan route by making it about Sarah’s backstory: For the last 30 years, she’s been hunting and killing straggler Terminators sent back before 1991, before Skynet was stopped. I would stand in line to see that.

Dark Fate offers some solid action scenes (although nothing as good as the somewhat under-appreciated Terminator 3), at least until the overblown climax, and while I’m sure the movie’s intent was to condemn American border enforcement, all it did was remind me of how badly we need more border enforcement and a big, beautiful wall.

Nothing will be lost if you wait to see Dark Fate at home. The last 30 or so minutes are so dark and murky — in that cheap CGI’d way — you gain nothing on the big screen. In fact, nothing is gained at all by the existence of Dark Fate. It’s just not necessary and it’s nowhere near good enough to help you forget that.