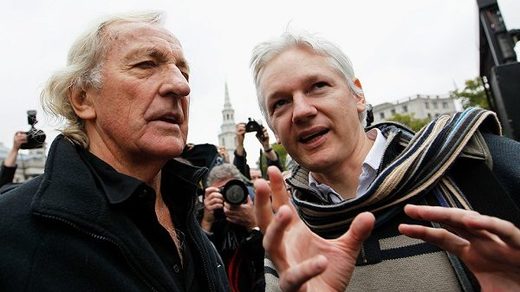 The attempt to extradite WikiLeaks co-founder Julian Assange from the UK to the US is not only about locking up the Australian, but about “shutting down dissent” and “investigative journalism,” claims journalist John Pilger.

Speaking outside Westminster Magistrates’ Court in London on Friday following the decision to open a new, full US extradition hearing in February 2020, Pilger insisted that the motivation of the American authorities in pursuing Assange was clear to see.

The Australian journalist suggested that other reporters in the UK and around the world were reluctant to show solidarity with Assange due to a “certain anxiety” that they may also be targeted for their investigative journalism.

The US Justice Department has filed 18 charges against the 47-year-old Australian journalist, including one count of conspiring with Chelsea Manning, the former intelligence analyst and whistleblower, to gain access to the US Pentagon network.

Assange is currently serving a 50-week prison sentence in the UK for jumping bail in 2012. He was too ill to appear at the last hearing at Westminster Magistrates’ Court regarding the US request in May.