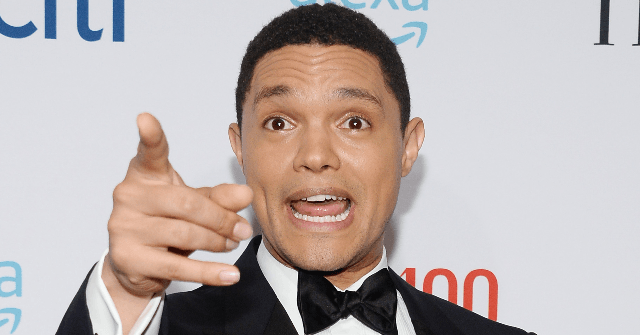 The Daily Show host Trevor Noah on Wednesday lamented former White House Press Secretary Sean Spicer’s continued presence on Dancing with the Stars and the support he has received from conservatives and Breitbart Nation.

Spicer has made it week after week on DWTS, despite receiving relatively low scores from the judges. Voter support has clearly carried him through each week– so much that he has yet to find himself in the bottom two. His victory last week left many leftist viewers in disbelief, spurring a flurry of complaints on social media.

Spicer’s stay appeared to irk The Daily Show host Trevor Noah, as well. While he told his audience that “people on the left don’t care if a conservative wins Dancing with the Stars,” he devoted an eight-minute segment to Spicer’s presence on the show, lamenting the support he continues to receive from conservatives and Breitbart Nation, particularly.

“So once it became clear that he wasn’t gonna win over the judges, Sean Spicer decided, ‘Screw the whole nonpolitical, kumbaya crap,’ and he started going on the far-right website Breitbart to turn this dance competition into a full-on civil war,” Noah said, referencing Spicer’s recent interviews with Washington Political Editor Matthew Boyle on Breitbart News Sunday.

However, as numerous media outlets reported, Spicer faced opposition from the moment he was announced as a cast member on the show. The move sent leftists into a fury, and many threatened boycotts against ABC. It was then that conservatives decided to rally together to send a message to Hollywood, a message Spicer has since acted as a conduit for: “We cannot be canceled out.”

It’s the folks who are out there supporting us from the right and really are enjoying this success that we’re having. Because I’ve told you this before, but it’s not about me. It’s about we. It’s about making sure that people all around have their voices heard and just like the 2016 election, that we show them that people– everyone’s got a voice and we all should be able to participate in the process and system and have our voices heard.

“I think that’s a great message to send. For all of those folks on the right– that we are equal participants and we cannot be canceled out,” Spicer added.

The message appeared to be lost on Noah, who while claiming not to care about Spicer on DWTS, spent eight minutes lamenting the support Spicer has received by “the conservative world,” including Breitbart listeners.

“But beyond riling up Breitbart listeners and showing his supporters how to vote a thousand times, Spicer’s campaign has been successful,” Noah admitted.

“Because, you see, he’s harnessed the full support of the conservative world,” he continued, playing clips primarily from Fox News.

“I know Sean Spicer isn’t technically breaking any rules. I mean, he’s breaking a ton of dancing rules and just general rules of physics about how the human body is supposed to move,” Noah said, adding that the former White House official is “ruining” the show for “a lot of its fans.”

“He is ruining Dancing with the Stars for a lot of its fans who genuinely love to watch good dancing, because this-this is not supposed to be about politics,” he said. “It’s about talent.”

Noah cited his experience on DWTS in South Africa as a primary reason for his annoyance, stating that he “kicked ass” because he “worked hard at it.”

“So if Sean Spicer’s gonna destroy one of the greatest, most-respected institutions in the world, I have no choice but to defend its honor,” he added, challenging Spicer to a dance-off.

“What frustrates them I think, is when they do shout out ‘Cancel this person out. Don’t let them on. Don’t let them succeed’ and then people vote. Because they don’t get it,” Spicer said.

“They don’t understand where these votes are coming from. ‘Who are these people who don’t agree with me or don’t think like I do?’” he continued.

“Hopefully this is helping the overall movement and people realize – hey look, you’re an advertiser, if you’re a show, there are a lot of active folks on the right that you should be paying attention to,” he added.