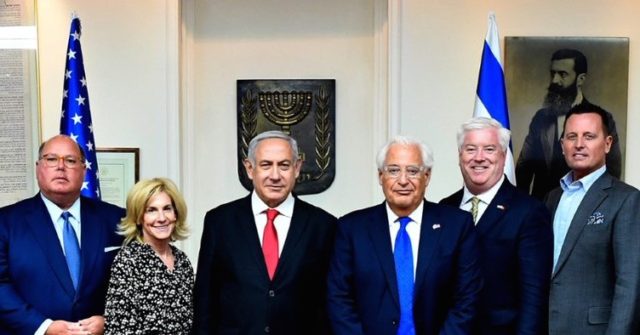 A large delegation from the Trump administration, including several U.S. ambassadors and other officials, happened to be visiting Israel during the weekend’s Palestinian rocket attacks, and issued a statement of solidarity from there.

Many of the ambassadors and officials had also been part of the administration’s official delegation to the March of the Living in Auschwitz, Poland, last week — the first such delegation sent by any U.S. administration.

They met with Israeli Prime Minister Benjamin Netanyahu, and were hosted by U.S. ambassador to Israel David Friedman.

Honored to host a visiting delegation of US ambassadors and US Special Envoy for Combatting Anti-Semitism Elan Carr. Please see our joint statement below in support of Israel as the country faces yet another barrage of missile attacks on its citizens. Enough is enough! pic.twitter.com/NYT1Q7wLfW

In a joint statement, they declared:

Over the past 36 hours Israel has suffered from a barrage of over 600 rockets and mortars fired indiscriminately by terrorists in Gaza. This barrage has come from civilian areas in Gaza and is aimed at civilian centers in Israel, demonstrating once again a cynical readiness to risk the lives and futures of the people of Gaza as well as those of the Israeli people.

The sole aim of these terrorists is to kill, maim and terrorize citizens of Israel. These actions by Hamas and Islamic Jihad are simply unconscionable. No other nation on Earth would tolerate this.

Can one imagine rockets falling on Washington, Berlin, Paris, Brussels, Bern or Lisbon today without an appropriately strong reaction?

We affirm Israel’s right to defend itself and urge all nations to call these actions out for what they are — terrorism pure and simple.

The March of the Living is an annual commemoration of the Holocaust. participants typically participate in the three-kilometer march from the Auschwitz concentration camp to the Birkenau death camp, and many continue on to tours in Israel.

Joel B. Pollak is Senior Editor-at-Large at Breitbart News. He is a winner of the 2018 Robert Novak Journalism Alumni Fellowship. He is also the co-author of How Trump Won: The Inside Story of a Revolution, which is available from Regnery. Follow him on Twitter at @joelpollak.