The United Nations Office at Geneva (UNOG) posted the flag of Antifa on their official Twitter account, saying that a group of  human rights “experts” at the globalist organisation had expressed “profound concern over a recent statement by the U.S. Attorney-General describing Antifa and other anti-fascist activists as domestic terrorists, saying it undermines the rights to freedom of expression and of peaceful assembly in the country”.

One of the experts cited in the statement was Fionnuala Ní Aoláin, the UN Special Rapporteur on the promotion and protection of human rights and fundamental freedoms while countering terrorism, who also works as the Board Chair of the Open Society Foundation’s Women Program— OSF being the plaything of left-liberal billionaire activist George Soros.

What is interesting is that the UN has never been concerned about the muzzling of free expression when it occurs against conservatives, particularly online.  Free speech was tossed aside years ago, and yet the UN is only concerned now that Antifa is the recipient of the crackdown.

Truth be told, nobody is telling Antifa that it cannot express itself. What they are saying is that Antifa cannot throw bricks through the windows of businesses and burn down public buildings, both of which constitute acts of terror, if you will, against innocent Americans. 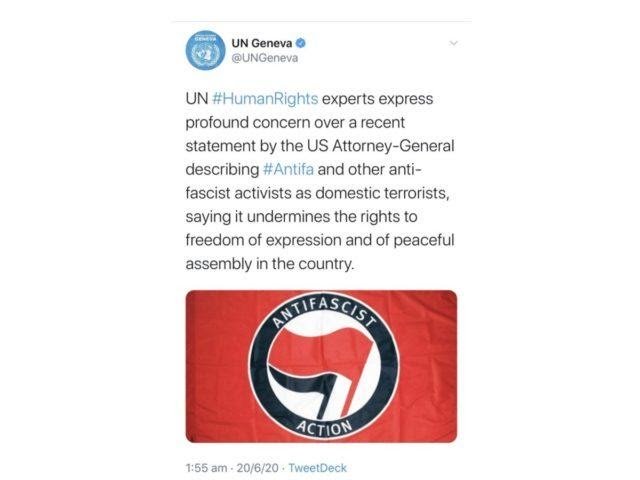 For even suggesting that violence and destruction somehow constitute free speech or peaceful assembly, the UN has become a target for defunding of its own volition.

The UN’s criticism of the Trump Administration’s rhetoric on Antifa sparked widespread ridicule, with many calling for the U.S. to defund the international body — mimicking the leftist movement to defund the police.

The United Nations Office has now removed the post after considerable backlash following a report from Breitbart News.

The left’s explosive, prolonged rage at the election of President Donald Trump, gave life to the new ultra-violent leftist Antifa movement.  Antifa operates under a twisted definition of fascism, labelling mainstream conservatives as fascists and lumping them in with white-supremacists and neo-nazis. Antifa are talented at finding fascists where they don’t exist.

The word Antifa is a truncation of anti-fascist.  Despite the name, the movement embraces fascistic tactics.

They have become empowered to be violent by the legitimacy and pass given to them by mainstream media, globalist politicians and now it would appear the United Nations.”

The Trump Administration has called for the anarcho-communist group to be labelled as a terrorist organisation after reports indicated that supporters played a part in the widespread riots in America which have followed the death of George Floyd.

In a further incident at least 24 people were arrested after black bloc Antifa militants clashed with police, attacking officers in Paris on the fringes of a demonstration for healthcare workers.

The demonstrations were attended by around 18,000 people in Paris, according to police. At least 220 more protests were planned across the country.

The healthcare workers and union members taking part in the demonstration expressed criticism over the behaviour of Antifa Patrick Pelloux, president of the Association of Emergency Physicians of France, said he was disgusted by the Antifa rioting, saying: “We were robbed of this demonstration. It’s disgusting.”

So why would the UN tweet support for an anarchistic organisation such as Antifa?

I decided to delve a bit deeper and found the following on the UN’s website under the Counterterrorism section.

A new report commissioned by the Transnational Institute and Societal Security Network, The Globalisation of Countering Violent Extremism Policy: Undermining Human Rights, Instrumentalising Civil Society, indicates, on the contrary, that the globalization of Countering Violent Extremism translates into the globalization of another set of alarming problems: harm to human rights and the undermining of civil society.

A recently published report revealed that 12 Judges in the European Court of Human Rights are linked to the George Soros Open Society Foundation (OSF) network.

It is clear from the information I have discovered on the UN’s website and also the George Soros Open Society Foundation site that they are working in tandem but why would two Institutions who purport to counter violent extremism support a violent extremist organisation?

It is clear that the United Nations MUST now come under the spotlight, their intentions and links with George Soros and Antifa require thorough investigation.

Q:  Will President Trump defund the UN as he has previously with the World Health Organisation?