War on The Whitehouse – Deployment of DOJ Task Force

Attorney General Bill Barr has just released a memo announcing that he is forming a Justice Department task force to take down violent anti-government far left extremist groups, such as Antifa, and those who support the “Boogaloo” movement.  Boogaloo is a far-right movement whose followers hope to spark a civil war by using violence.

The task force will target significant threats to the rule of law and groups who commit indefensible acts of violence.

Some pretend to profess a message of freedom and progress, but they are in fact forces of anarchy, destruction, and coercion.  Some of these extremist groups may be receiving funding from foreign entities who are looking to sow seeds of chaos and division within the US.”

The task force will work with the FBI to “develop detailed information about violent individuals, networks, and movements. It will also provide training and resources to local police and law enforcement to help track down and arrest anyone perpetrating acts of violence.

The ultimate goal will be not only to enable prosecutions of extremists who engage in violence but to understand these groups well enough that we can stop such violence before it occurs and eliminate it as a threat to public safety.

To illustrate just how emboldened the BLM terrorists have become Hawk Newsome the BLM leader appeared on the Fox News Channel and threatened to “burn down this system” if the government doesn’t “give us what we want”.

Protecting American monuments, memorials, and statues from being ripped down. 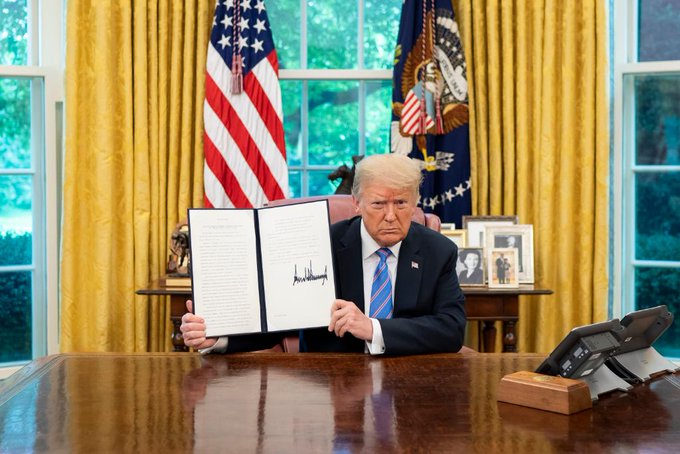 “I just had the privilege of signing a very strong Executive Order protecting American Monuments, Memorials, and Statues – and combatting recent Criminal Violence”.

“Long prison terms for these lawless acts against our Great Country!”

But of course it doesn’t end there, the mass riots we are witnessing are just another strategic military operation in the radical left’s open warfare being waged upon President Trump a war that has been raging relentlessly from the very moment he entered the Whitehouse.

United We Dream, an open borders lobbying group, funded partially by Billionaire George Soros, is vowing to defeat President Trump by turning out to vote about 6 million young  disenfranchised Hispanic Americans in the upcoming November election.

The activists have declared they are “powering up” their members to turn out millions of new Hispanic American voters to derail Trump’s re-election campaign.

In the past, the group has pushed for open borders and an amnesty for the 11-22M illegal migrants currently living in the US.

The group also managed to get to 800,000 illegal migrants to enrol in former President Obama’s Deferred Action for Childhood Arrivals (DACA) program.

Cristina Jiménez, Executive Director of United We Dream stated – “We know that in order to defend immigrants, protect DACA and defend our democracy, Trump must be defeated this November”.

Groups among the leftist-driven get-out-the-vote effort include:

Since the death of George Floyd last month, the far-left push to “defund the police” has been linked to United We Dream.  The groups have long claimed that arresting and deporting illegal migrants are rooted in white supremacy and systemic racism.

Now it has emerged that leftist billionaire George Soros is linked to the “defund the police” movement that has dominated the debate. The Soros-affiliated group is called Organized Communities Against Deportation (OCAD) according to Breitbart.

Other activist groups participating in the protest are:

For 4 years President Trump has undergone heavy military bombardment from the Democrats and a highly organised, strategic globalist network with a heavily funded war chest.

Be under no illusion this is all about Global Governance – a huge power grab on the back of the Covid-19 “pandemic” and ensuing riots perpetuated to inflict economic and social chaos ready for the globalist driven “Great Reset”.

Will the Nation State survive – time to buckle up – prepare for a bumpy ride!.