However, Cox is not well-placed to complain. Ofwat’s charging methodology is shrouded by its own veils of corporate-speak, rendering its “charges schemes” masters of complexity and obfuscation. No more is it possible to get a straightforward view of the basis for charging, that it is to discover precisely how water companies structure their charges.

On the other hand, information from the so-called “consumer watchdog”, the Consumer Council for Water, is patronising, superficial and entirely unenlightening.

The new Ofwat chairman says his highest priority is to deliver a forthcoming five-year price review in a way that benefits customers, while ensuring that the sector can efficiently raise funds. In this, he says he is committed to incentivising and rewarding capital fairly while firmly protecting customers and the industry’s legitimacy.

Cox, however, is being too optimistic about the industry’s legitimacy, and his own capability to bring the industry to heel. Small things speak volumes to the public when they assess what are increasingly being regarded as the new generation of “fat cats”. Thus does a commenter remark that the CEO of Yorkshire Water more than trebled his salary when Yorkshire Water Authority became Yorkshire Water PLC – Mr Cox himself being a beneficiary.

And if Cox thinks the water companies are going to roll over and suddenly become consumer friendly, he looks set to be disappointed. Coming out fighting is Thames Water. Its finance director, Stuart Siddall, has declared its conscience “absolutely clear”, parading a fall in pre-tax profits of nine percent to £550m, on a turnover of £1.8 billion.

By contrast, the Cooperative Retail Group made £7.4 billion in food revenue for the year ending 5 January 2013, and an operating profit of £288.4 million.

Thames puts this “downturn” – a profit level that any supermarket group would kill for – to bad weather, rising energy costs and, significantly, unpaid customer bills. As a result, the company booked a £5.1 million tax credit, paying no corporation tax at all, but hitting customers with a 6.7 percent increase. In an attempt at damage limitation, it says it has paid business rates and other taxes, such as the income tax on behalf of its employees, which amounted to about £150 million.

This, though, is a company with a serious image problem. In 2001, it was bought by the German company RWE, who own nPower, which then sold it to Kemble Water Holdings in 2006, “following several years of criticism and failed leakage targets”. Kemble is a consortium run by an investment fund managed by Macquarie Bank, an Australian bank which was founded in 1969 in Sydney as Hill Samuel Australia, a subsidiary of Hill Samuel, UK. That company, in turn, is owned by Lloyds TSB.

With this labyrinthine ownership structure, the public is only too well aware that it is not so much paying for water services, as funding a segment of the financial services industry. Thames Water accounts show it paid £231.4 million in dividends to its parent company, with £279.5 million having gone that way the previous year. 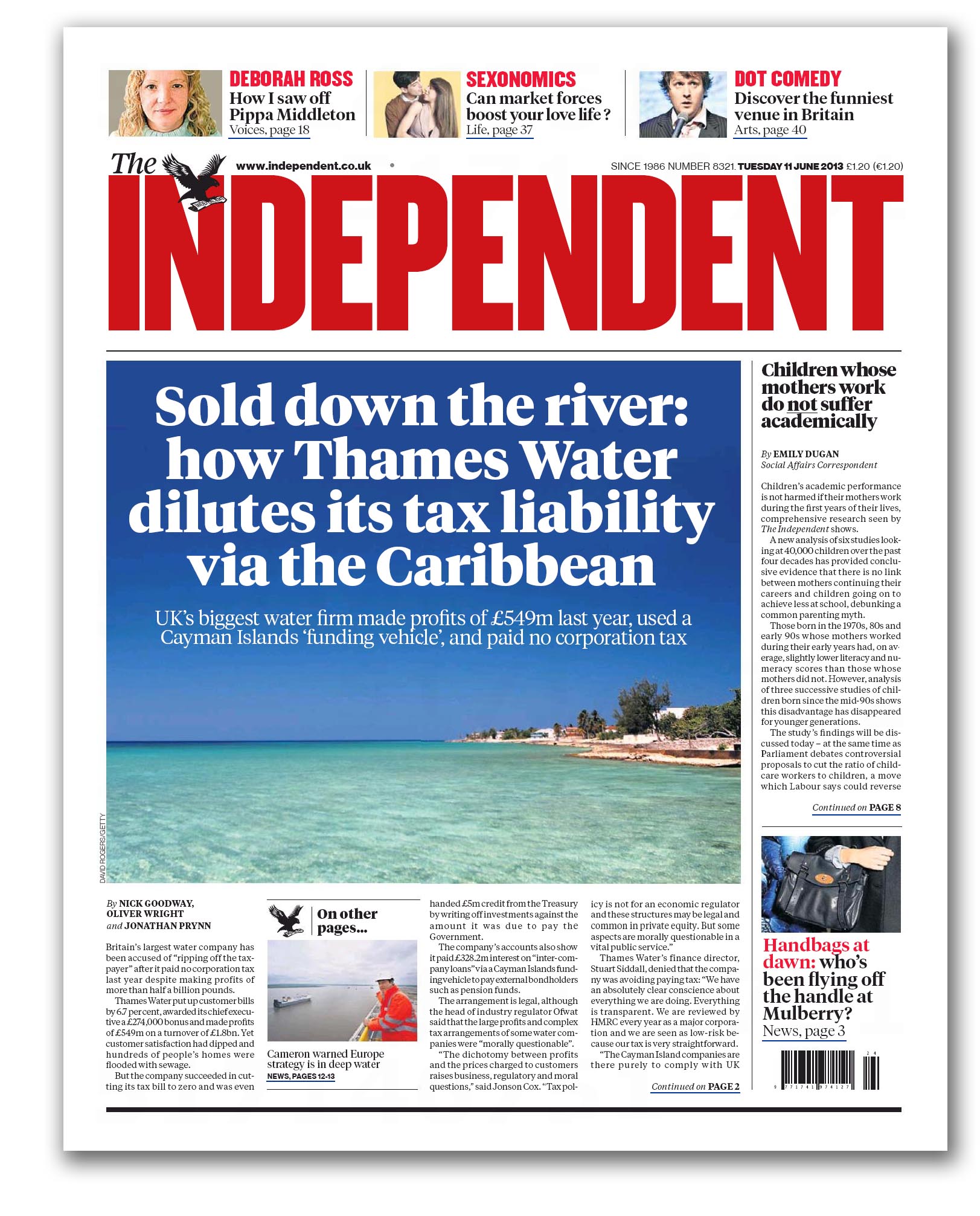 The accounts also show it paid £328.2 million interest on “intercompany loans”, paid via a Cayman Islands funding vehicle to its external bondholders such as pension funds. Since 2006 it has reported post-tax profits of £1.8 billion and handed £957 million to its shareholders. And with such much money being diverted offshore, the public have been “sold down the river”, as the Independent puts it on its front page.

Such is the corporate arrogance, though, that Siddall seems unaware of Cox admitting that Ofwat has been too lax in allowing the water companies excessive profits, defending the current profits on the basis that the 4.31 percent return was “below what was determined by Ofwat”. By such means, Ofwat becomes the apologist for the industry rather than its regulator.

Thames chief executive Martin Baggs, meanwhile, has been awarded a pay rise of 5.9 percent, taking his basic salary to £450,000. He has also scooped a bonus of £274,000 as part of a scheme to “reward significant improvement in the group’s financial and corporate performance”. Next month, he will pick up a further £366,000 in shares under the company’s long-term incentive plan.

Even then, this is relatively modest compared with Yorkshire Water, whose CEO Richard Flint takes home nearly £1 million in salary and bonuses. He has presided over a six percent rise in operating profits, up to £331.5 million last year, compared with £303.3 million in the previous period.

Without adding to its customer base, the company managed to increase its turnover by four per cent to £936.2 million (up from £893.6 million), achieved almost entirely from increased charges and a fall in capital expenditure of four percent, to £385.7 million.

This year, the average bill rose by 5.1 percent, well above the current inflation rate of 2.6 percent. Chairman Kevin Whiteman thinks this a “good overall business performance”, as well be might for a company that is free to sting its customers with inflation-busting charges, irrespective of customers’ willingness to pay.

It is quite fitting, in a way, that these are companies which also own the sewers which transport domestic sewage. Dealing with the products of this enterprise, they must be so used to the stench that they no longer notice their own.